The Grey Cup is back in Vancouver for the 15th time. Here’s a look at a few of the early Grey Cup festivities in this city.

The first championship game played for the Grey Cup was in 1909. It was then awarded to the top amateur rugby football team in Canada. Rugby was popular in Vancouver, but no BC team appeared in the Cup game until 1963. The game, and the uniforms, were quite different from today.

The first time the Cup was held in Vancouver was 1955, when we had a new stadium to show off. The game was held in Empire Stadium, which had been built for the British Empire and Commonwealth Games held in 1954.

The importance of hosting the Grey Cup Game was explained in an invitation to a fundraising dinner held September 30, 1955:

The presentation of the 1955 Grey Cup Game in Vancouver will focus the attention of the continent on our City. The game and its staging will be viewed on coast-to-coast television, reported over a national radio network and in America’s leading publications.

The obvious desirability of creating a warm and colourful atmosphere at the time of the Game prompted the Mayor to establish the Grey Cup Festival Committee . . .[1]

One of the events they had to plan was the Grey Cup Parade. Here’s a home movie of that 1955 parade: you’ll see Marilyn Bell (first person to swim across Lake Ontario, in 1954), Miss Canada, horses and plenty of colourful floats.

When Vancouver hosted the Cup again in 1960, the theme of the Grey Cup Festival—“British Columbia in the Fabulous Sixties”—looked forward to a decade of “golden years” and of “happiness unsurpassed”, as noted inside the colourful dinner program below.

We found a press pass in the City’s files of Festival preparations. 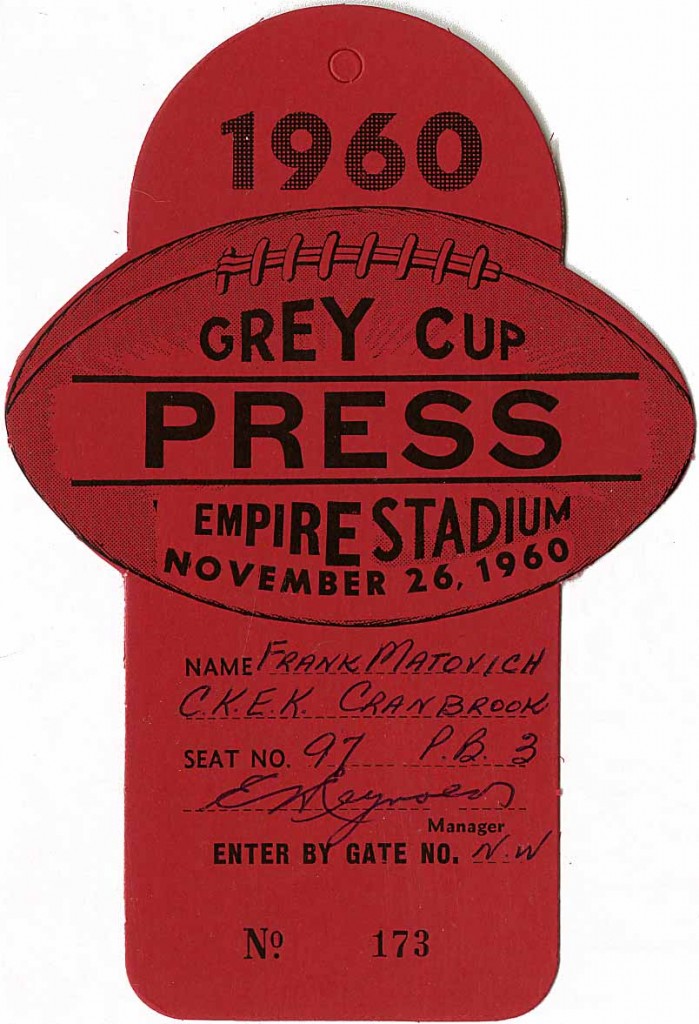 When the Grey Cup Championship returned to Vancouver in 1963, there was another dinner and another program, this time decorated with cartoons by Len Norris.

We also have minutes and financial records from past Grey Cup Festival planning.