The City’s 50th birthday was in 1936. Citizens of Vancouver, just like those now awaiting the 125th anniversary, were eagerly anticipating the City’s first major anniversary celebration: the Golden Jubilee.

Vancouver in 1936 was much different from 2011, and not just in terms of its landscape. Rather than gaining momentum from a large internationally watched event the year before, in 1936 the City was still suffering from the impact of the Great Depression. Although the population of Vancouver was over 250,000, making it the third largest city in Canada, high unemployment, relief camps, and episodes of social unrest were emblematic of the decade.

In spite of the unfavorable conditions and the criticism of spending too much, Mayor Gerry McGeer enthusiastically promoted the Golden Jubilee . Throughout the year there were over 800 hours of celebrations including parades, carnivals, dances, sporting events and musical performances. Today, we can still see remnants of the 1936 celebrations in the Lost Lagoon Fountain in Stanley Park, the Captain Vancouver statue at City Hall, and City Hall itself (City Hall was opened on December 4, 1936, which marked the close of the year’s celebrations).

In order to organize such a large event, a Golden Jubilee Society was formed in 1935 with board members from the City and various civic organizations. The records of the Society are kept in the in the City of Vancouver Archives as the Vancouver Golden Jubilee Society fonds. The fonds consists of minutes; correspondence; newspaper clippings; an album of photographs compiled by Major Matthews, the first City Archivist; a bound volume of minutes for the City Council Meeting of August 20, 1936; a visitors’ register; records of the Women’s Division of the Jubilee Committee; programs and menus; and other material. 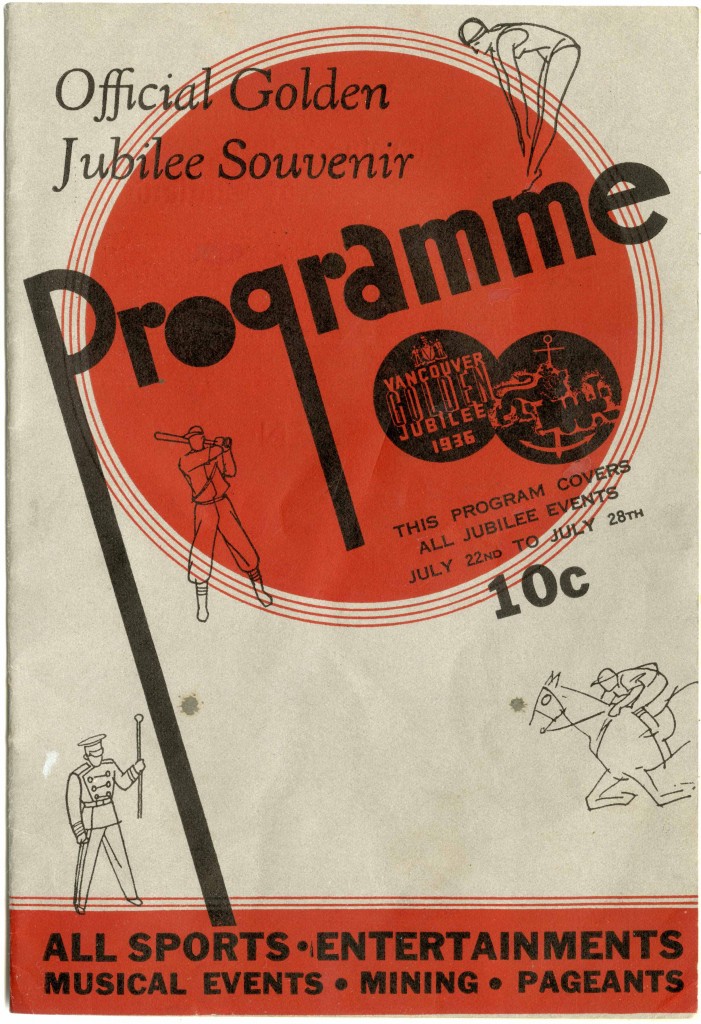 The Vancouver Golden Jubilee Society fonds is a relatively small body of records, with no more than 10 boxes of textual materials and about 300 photographs. The fonds documents how the City collaborated with various communities to deliver a successful celebration, which aimed at bringing hope, pride, spectacle, and enjoyment to Vancouver’s citizens struggling in harsh economic times. The minutes and correspondence of the Society tell us that the 800 hours of Golden Jubilee events occurred over seven weeks and required 86 preparatory meetings. 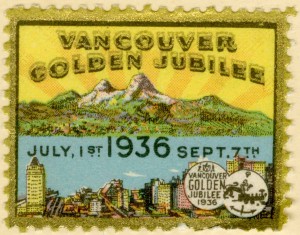 The main theme of the celebration was a vision of Vancouver’s wonderful future, and was dedicated to the City’s youth. The members of the Society believed that youth would carry the torch of progress into the future. Under this theme, nearly all civic and business sectors of the City were involved. The final report of the Society declared that there was “Not a moment in any part of the City, without the Jubilee spirit. … Cooperation from all sectors of the Pacific area for the great event which marks the 50th birthday of the City.”[1] 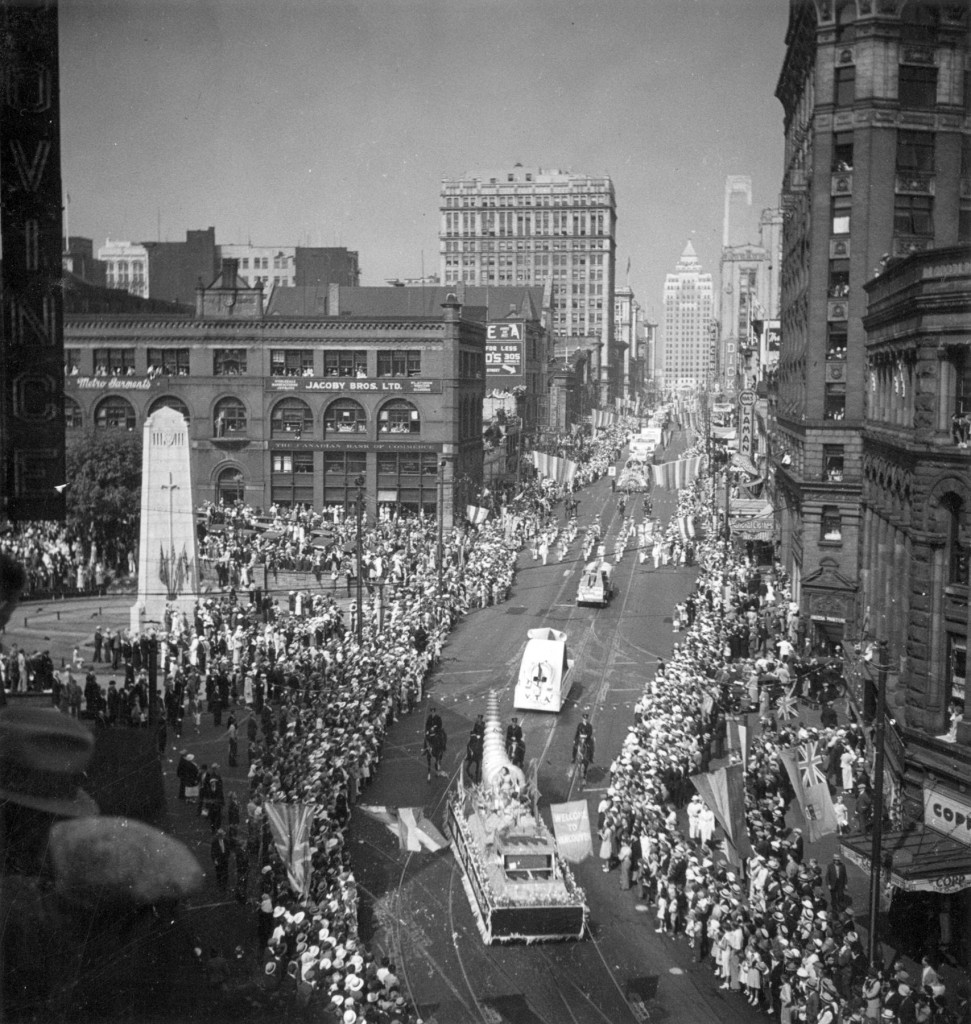 Among the records of the Vancouver Golden Jubilee fonds, the photo album compiled by Major Matthews is noteworthy. In addition to wonderful visual documentation of the celebration, the album includes his article, Builders of Vancouver. In the article, Major Matthews asks, “Who were ‘The Builders‘ of Vancouver? Not supermen, but ordinary British and Canadian sons; pioneers of hope, courage, vision; with the power of justice, and the patience of strength. … The founders of Vancouver builded [sic], not a fort, but a garden on the shore.”[2]

Besides compiling the photo album, Major Matthews played a key role in promoting and publicizing the Jubilee. One of the main events of the celebration was the visit of the Lord Mayor of London, Sir Percy Vincent. He visited Vancouver with gifts, including a mace and paintings and was honoured with a huge formal banquet at the Hotel Vancouver. This single event accounts for a significant portion of the fonds. There were numerous mentions in meeting minutes, correspondence, news clippings and photos. A letter sent from W.A. McAdam, the Acting Agent General for British Columbia, to the Golden Jubilee Society emphasized the importance of Vincent’s visit to Vancouver. The letter urged the Society to act fast to secure the visit, in order to “link up the City’s celebration with the Mother Country,” since Johannesburg, South Africa, was also celebrating its Jubilee in the same year. Mr. McAdam wanted to make sure that Vancouver’s “own thunder” was not “stolen.”[3] 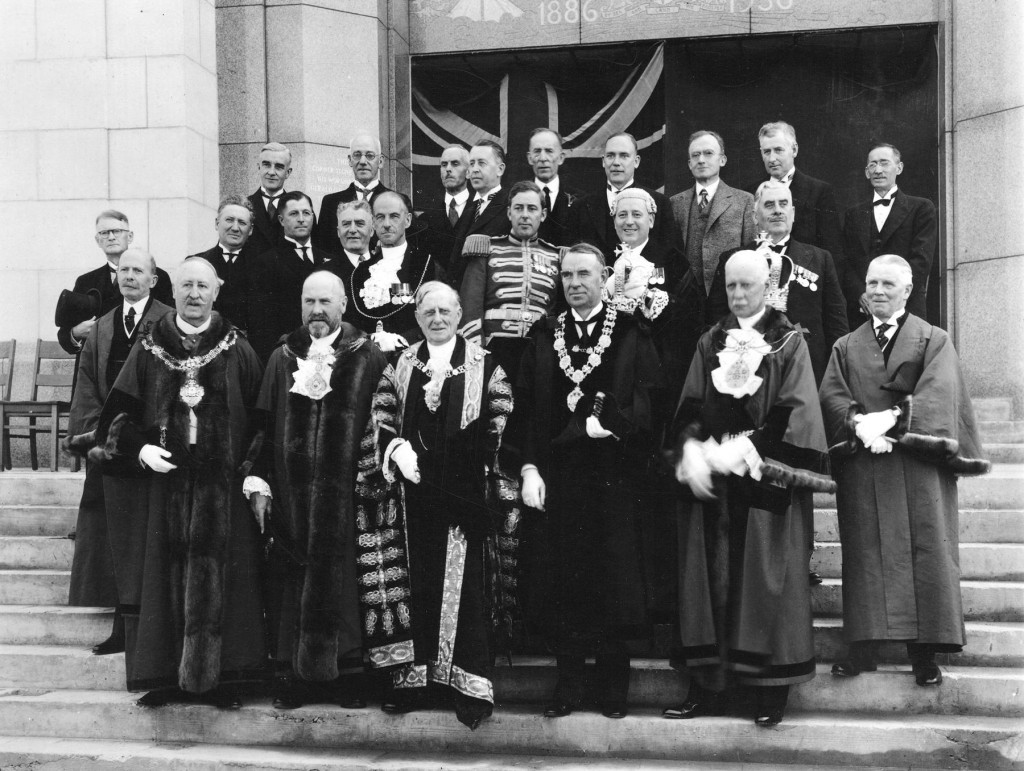 Even though the Golden Jubilee was Vancouver’s very first anniversary celebration, it took place under the dark shadow of the Great Depression. The celebration is barely or only very generally described in most of the history books on Vancouver. In fact, the Golden Jubilee seems to have been was a very successful event. The society strove to bring joy and pleasure to the citizens but also to give courage, hope and comfort to people facing difficult times. Thanks to the Vancouver Golden Jubilee Society fonds, this wonderful piece of Vancouver’s history is preserved and this sweet moment in time can be recalled.

Written by: Chak Yung
This entry was posted in Holdings and tagged fonds, Vancouver Golden Jubilee Society. Bookmark the permalink.