From January to March 2011, I worked as a professional work experience student at the City of Vancouver Archives, where my focus was on motion picture film preservation and description. After my initial training by Chak Yung, my first task was to write archival descriptions of a dozen films, including promotional films about Vancouver from the early 1970s and Protest (recently featured on CVA’s blog), a film documenting demonstrators picketing a movie house on Granville Street that was showing the infamous 1979 film “Caligula.” 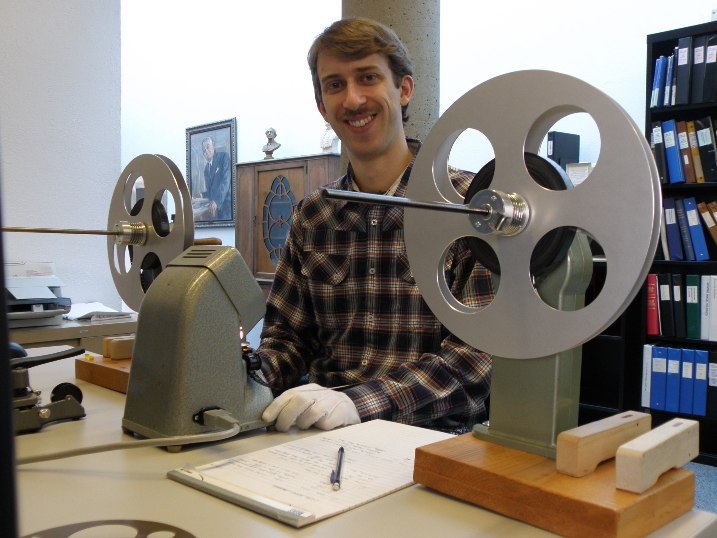 Having a keen interest in traditional film photography, I was not surprised to find working with motion picture films entirely to my taste. I particularly liked being immersed in the analog world of acetate film, split reels, and clunky yet mechanically ingenious old Moviola editing equipment. In a past life, perhaps I would have enjoyed working in the cutting room as a film editor!

I was very happy to be entrusted with a variety of historically interesting films to work on, such as a group of 16mm films created by S.S. MacGoffin, a local railway construction contractor. These included footage of a family trip to Cuba (downtown Havana and resort vacationing in the 1920s), the 1932 Los Angeles Olympics, a visit to the Capilano Suspension Bridge, and a parade in downtown Vancouver around 1927.

With guidance from Jeffery Chong and Sue Bigelow, I learned how to date films from their stock codes, identify deterioration such as vinegar syndrome and ferrotyping, and repair tears and weak splices.

I also appraised another group of recent acquisitions which included films of local horse shows in the late 1940s (in colourful Kodachrome), skiing at Grouse Mountain in 1930 (in knickerbockers and flat caps), and a local jeweller’s trip to England by steamship in 1926.

A big thank you to Heather Gordon and the City of Vancouver Archives staff that I had the pleasure to work with during my time there. I thoroughly enjoyed learning about motion picture film preservation and Vancouver’s history, and I appreciate the opportunity CVA provided for me to gain some hands-on experience with film.

Peter Houston is a recent graduate of the Master of Archival Studies program at UBC’s School of Library, Archival and Information Studies. He now works at the British Columbia Securities Commission as a Freedom of Information and Protection of Privacy Act technician.