Part of an occasional series on the W.J. Moore panoramic photographs.

We have previously featured W.J. Moore’s panoramic photography and his life.  Here’s a look at the type of panoramic camera and film he used and some of the unusual features of the photographs it produced.

The best-known and most widely used of the rotating-film panoramic cameras was the Cirkut camera. Capable of shooting a 360° view, it was patented in 1904 and sold until the 1940s. It was not easy to use, and so was purchased mainly by commercial photographers. Some photographers shoot with well-maintained Cirkut cameras today.

There were six distinct cameras in the Cirkut family to fit five different sizes of film. Four of the cameras were used exclusively for panoramas; two were built to be used with either panorama film or glass plate negatives. These last two versatile cameras were referred to as Cirkut Outfits.

W. J. Moore used a No. 8 Cirkut Outfit. It consisted of a 6″ x 8″ Revolving Back Cycle Graphic camera from which the photographer could select a panoramic attachment for making panoramic negatives, or a Graphic Double Plate Holder for making 6″ x 8″ glass plate negatives. It was manufactured between 1907 and 1926 and was originally priced at $175.00.

These seem to have been taken one after the other, using the glass negative back and the Cirkut Outfit. Some of the same people are lounging on the beach in almost the same position. It’s even clearer if you click on the images above to look at the high-resolution versions.

The panorama configuration of the No. 8 Cirkut Outfit consisted of four components:

The camera supplied with the No. 8 Cirkut Outfit was the 6″ x 8″ Revolving Back Cycle Graphic.  Solidly constructed out of mahogany, every necessary adjustment was included: rising and falling front, swing back and a rack and pinion focusing device.

It was focused with the ground glass screen in a vertical position and the revolving back in such a position that a plate holder could be inserted from the top.

The attachment for making Cirkut negatives contained the motor for revolving the camera on the tripod and winding the film at the same time. The film was wound past the exposure slot from the spool to the drum while the entire camera rotated on the tripod.

The No. 8 Cirkut Outfit came with the Graphic Rapid Rectilinear lens, which had a removable front element. When the two parts were used together, it had a focal length of 11 inches. If the rear element was used alone, it had a focal length of 18 inches, capturing a view roughly twice as long as that obtained with the complete lens at the same distance from the subject.

The two photographs below, taken on the same day with the same subject and at the same distance from the boy scouts, shows the difference. The top one was taken with the complete lens. The bottom one was taken with the single lens, and the scene shown is wider and the boy scouts appear to be further away. If you look closely, you will notice that some of the scouts repositioned themselves between photographs while the photographer changed the lens and film.

The No. 4 Crown Tripod with a 6″ Crown Tripod Top was an integral part of the clockwork-powered drive system that rotated the camera. The rotating aluminum platform travelled on small wheels to ensure the smooth movement of the camera. It was important to keep the camera perfectly level to prevent areas of distortion on the negative.

The sliding scale around the tripod top was used to calculate the length of film to use. Film length depended on the angle the camera rotated and the focal length of the lens used.

For example, if you wanted to make a negative that

the scale would show that you needed 36” of film.

Operation of the camera

The Cirkut Outfit had an internal clockwork motor that pulled the film past a vertical exposure slot counter-clockwise at a pre-selected speed. At the same time, the motor rotated the camera in the opposite direction (clockwise) on the geared tripod at the same relative speed that the film was moving past the exposure slot. The portion of the film being exposed was, in effect, stationary.

The scale and pointer indicated the speed of the motor from ½ to 1/12 of a second. The photographer would estimate the exposure required and set the pointer on the desired speed.

The camera was started by turning the depressed key in either direction. This simultaneously opened the exposure slot and started the motor.

When the exposure was finished, the depressed key was turned again to stop the motor and close the slot.

If more than one image was being shot on the same length of film, the photographer would press the concealed button to perforate the film after each exposure. This would show where to cut the film to create individual negatives of each shot.

W.J. Moore used Eastman film from Kodak for most of his panoramic photographs. In the 1930s, he occasionally used Agfa film. Both films came tightly rolled inside metal canisters in cardboard boxes. Below are the tops of typical boxes for Kodak and Agfa films for the No. 8 Cirkut Outfit.

While the camera could rotate through 360 degrees, it was rarely done due to potential mechanical difficulties, uneven lighting conditions and the resulting extreme length of the negative.  Below is an example of a 360-degree view of downtown Vancouver.

As you scroll slowly along the panorama above, imagine that you are rotating your body 360 degrees, which might help make sense of the distortion.

Traditionally, panoramic photographs taken “in the round” have always been presented and viewed flat, causing typical distortions to happen. The following is a rather simplified explanation of a complex problem.

Imagine you are out in the country, facing a tree-lined road.

What you see is this: 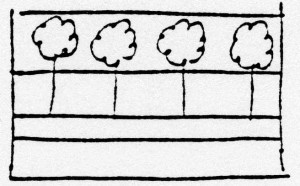 If you were to turn to the left,

you would see this: 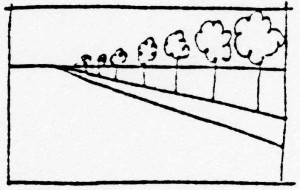 And if you were to turn to the right,

you would see this: 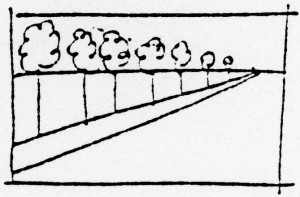 The rotating Cirkut camera, scanning the same view through a narrow vertical slot, in a continuous sweep,

Each narrow, vertical segment of the image is correct and yet the image, seen as a whole, gives us a distorted view because we are now looking at a flat image which originally was taken “in the round”.

The only way to correct the distortion is to curve the photograph so you view it in the same way that the camera saw the original scene.

How to be in two places at once

The Cirkut camera was extensively used for large group photographs. The camera rotated slowly, making it possible for people standing at one end of the group to run to the other end before the camera got there, so they could appear twice in the same photograph.

In the photograph below, one boy appears twice.

Here he is in details from the left and the right ends of the image above.

Much of this post was adapted from The Panoramic Photography of W.J. Moore 1913-1939, an exhibit co-sponsored by the Museum of Vancouver and shown in 1995. The exhibit featured 51 panorama prints, a No. 8 Cirkut Outfit, and three panorama prints mounted in a curvature so that they could be viewed without distortion.