There are a number of things which bring joy to an archivist’s heart: the tactile pleasure of (carefully!) handling an old and worn ledger, the completion of a meticulously-filled spreadsheet of file and item descriptions, rows upon rows of immaculate Hollinger boxes, and trays of homemade treats in the office. However, as an intern at the City of Vancouver Archives over the summer, I came to learn that it is often the many large and small discoveries which occur in the process of archival work that end up being the most gratifying and memorable experiences. 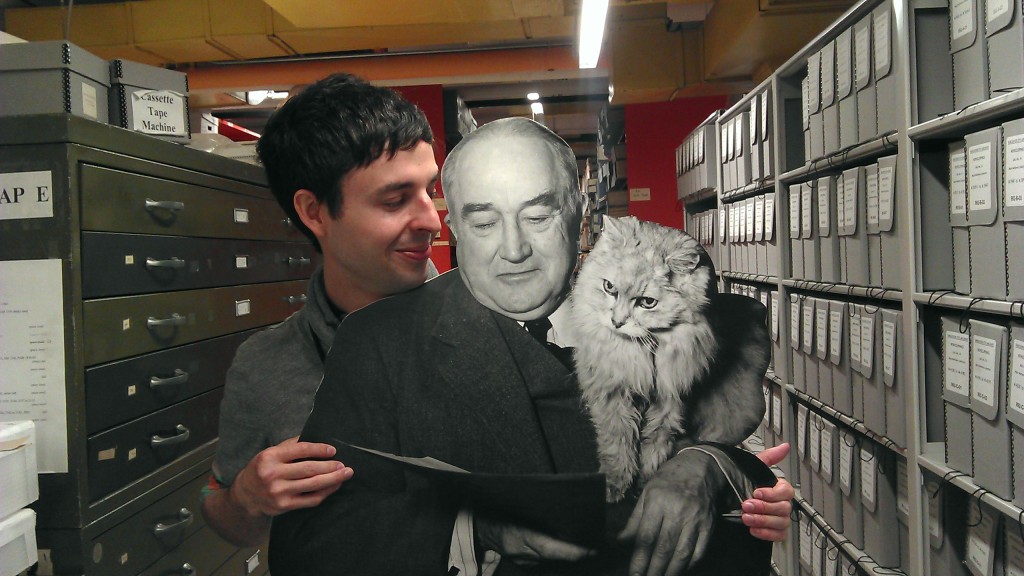 Kevin Owen with Major Matthews and Jack the Cat. Photograph by Rachel Sim.

Some of these discoveries are of the dramatic variety, such as when you are removing a piece of art from a frame for rehousing, only to find that the backing board in the frame is in fact a painted photograph from the 1890s. 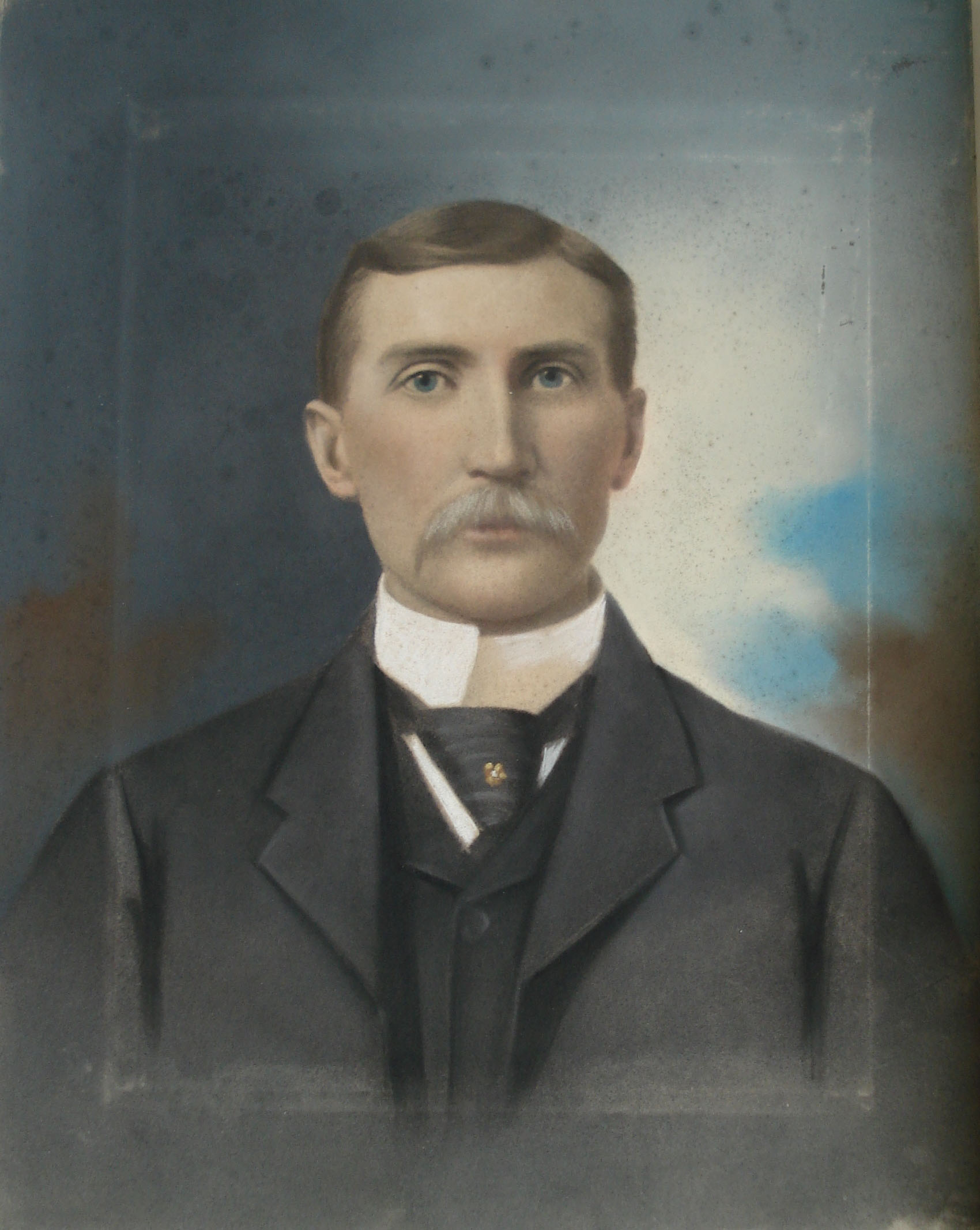 And while this specific event is relatively rare, the sense of wonder and reverence which accompanies it is never far off when looking through the Archives’ impressive array of holdings.Other pleasant discoveries come in the form of learning about Vancouver’s (and Canada’s) history through working with archival documents. One of the projects I worked on extensively over the summer, with the gracious assistance of Chak Yung (and my kind classmate, Rachel Sim!), was processing (appraising, arranging, and describing) the records of the United Empire Loyalists’ Association of Canada (UELAC) Vancouver Branch. The United Empire Loyalists are the descendants of the American colonists who remained loyal to the British Monarchy during the American Revolutionary War. As many of the First Loyalists relocated following the war to what would become Canada, they represent a foundational group in Canada’s heritage and history. 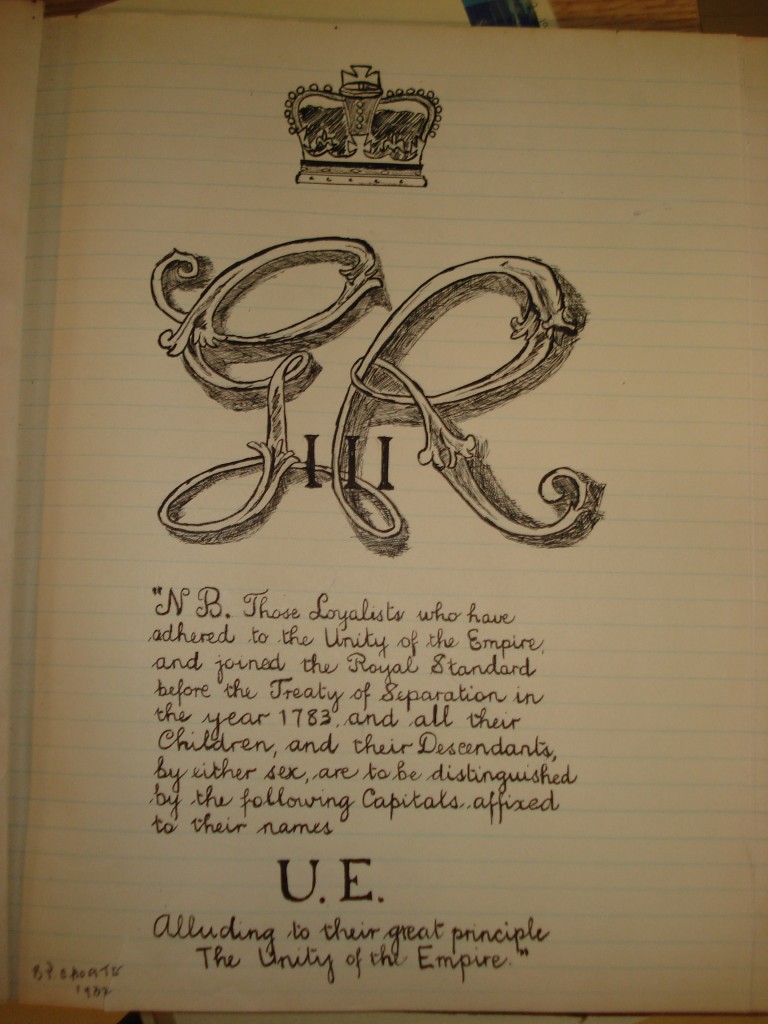 Taken from an early attendance book of the UELAC Vancouver Branch. Part of Accession number 2011-118.

The Vancouver Branch of the UELAC has amassed an amazing pool of genealogical information and research documenting the ties between citizens of Vancouver and these First Loyalists, which I am certain will be of interest to the public when the records are made available.

Although there is certainly pleasure for the archivist in personally discovering fascinating information in the records they work with (as evidenced by the seemingly encyclopedic knowledge of the Archives’ staff), there is an even greater pleasure for archivists in sharing this knowledge and assisting patrons of the Archives in making their own discoveries. For one week of our internships, Rachel and I were given the opportunity to aid researchers in finding and accessing their documents of interest. From this experience, we developed a set of reference guides aiming to facilitate the use of some of the Archives’ most commonly accessed holdings. With the generous assistance and input of the entire staff (in particular, the always accommodating Megan Schlase), we created two record type guides (Fire Insurance/Sectional Maps and City Directories) and one thematic guide (Researching Buildings and Houses), which we hope will be of assistance to researchers in the future. 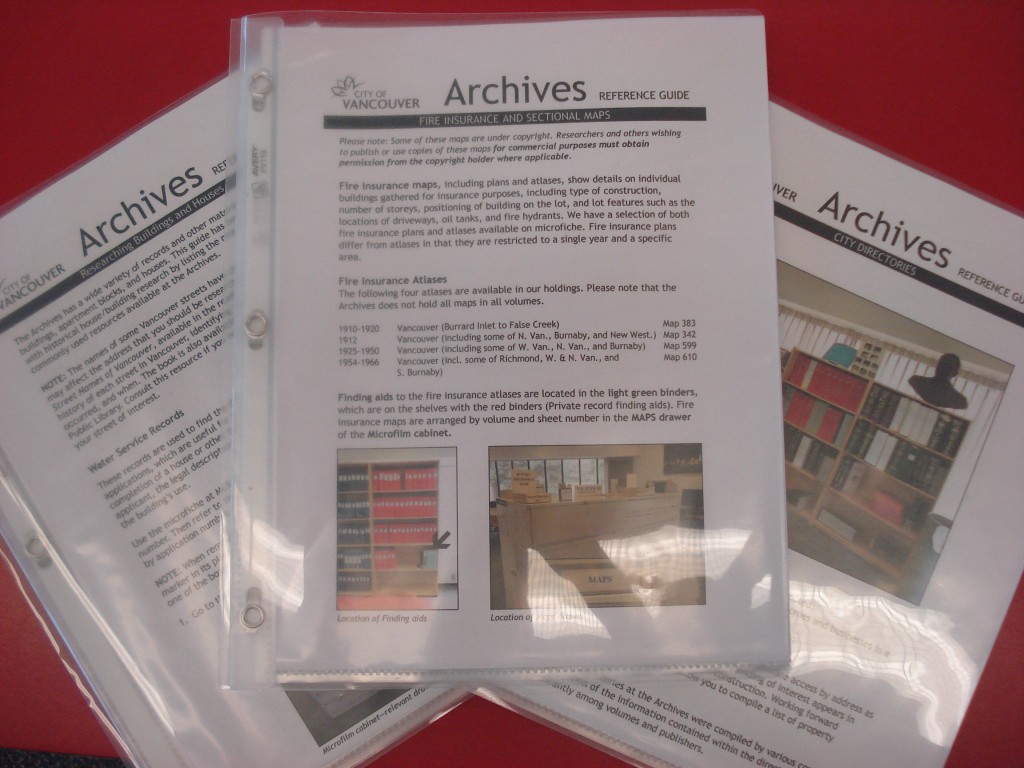 Now available in the reading room!

As a part of the internship, I also had the pleasure of working with wizard/conservator Rosaleen Hill (and interning wizard/conservator Dorcas Tong) in the preservation lab. With their helpful guidance, Rachel and I surface cleaned some glass plate negatives, constructed a protective phase box for an old book, cleaned and flattened architectural plans, mended paper tears, bagged and froze incoming boxes of documents (to prevent stowaway pests from entering the Archives), and removed surface soiling from some documentary art. 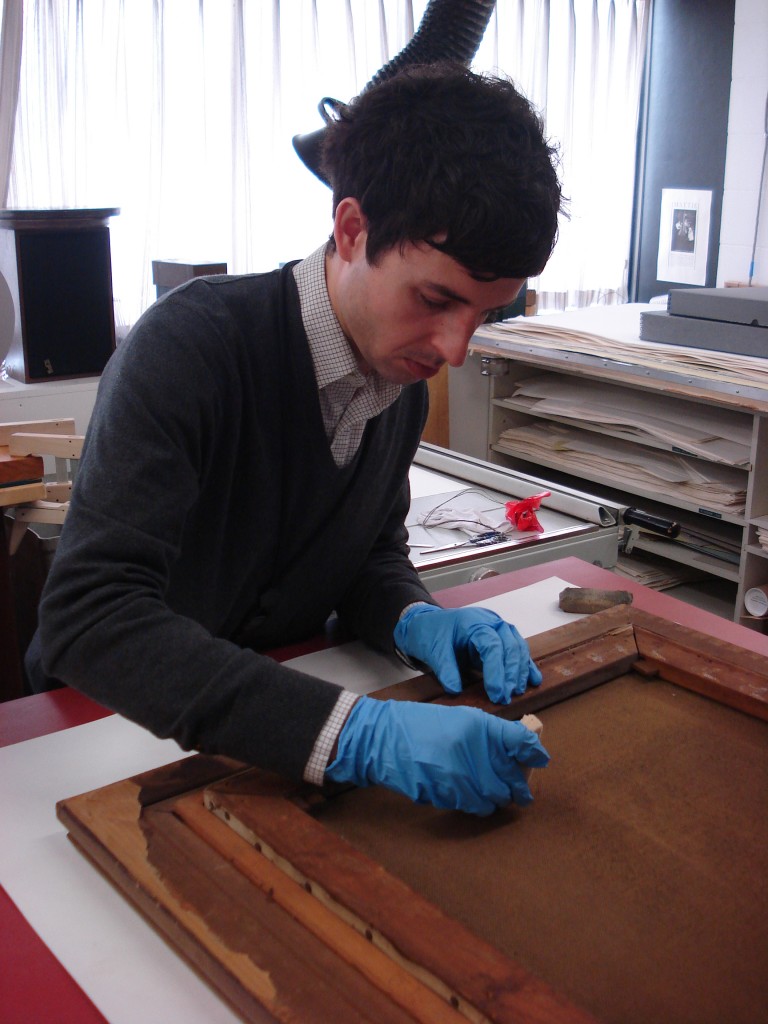 Kevin concentrating as he surface cleans the back of an oil painting. Photograph by Rachel Sim.

Not only did we become acquainted with some essential conservation techniques for ensuring that these records will be available to researchers for years and years to come, but we also were able to watch Rosaleen and Dorcas perform nearly magical feats of chemistry on a daily basis.

I cannot thank the staff of the Archives (and my fellow interns) enough for their generosity of knowledge and kindness; it truly was a pleasure to meet and work with all of you! 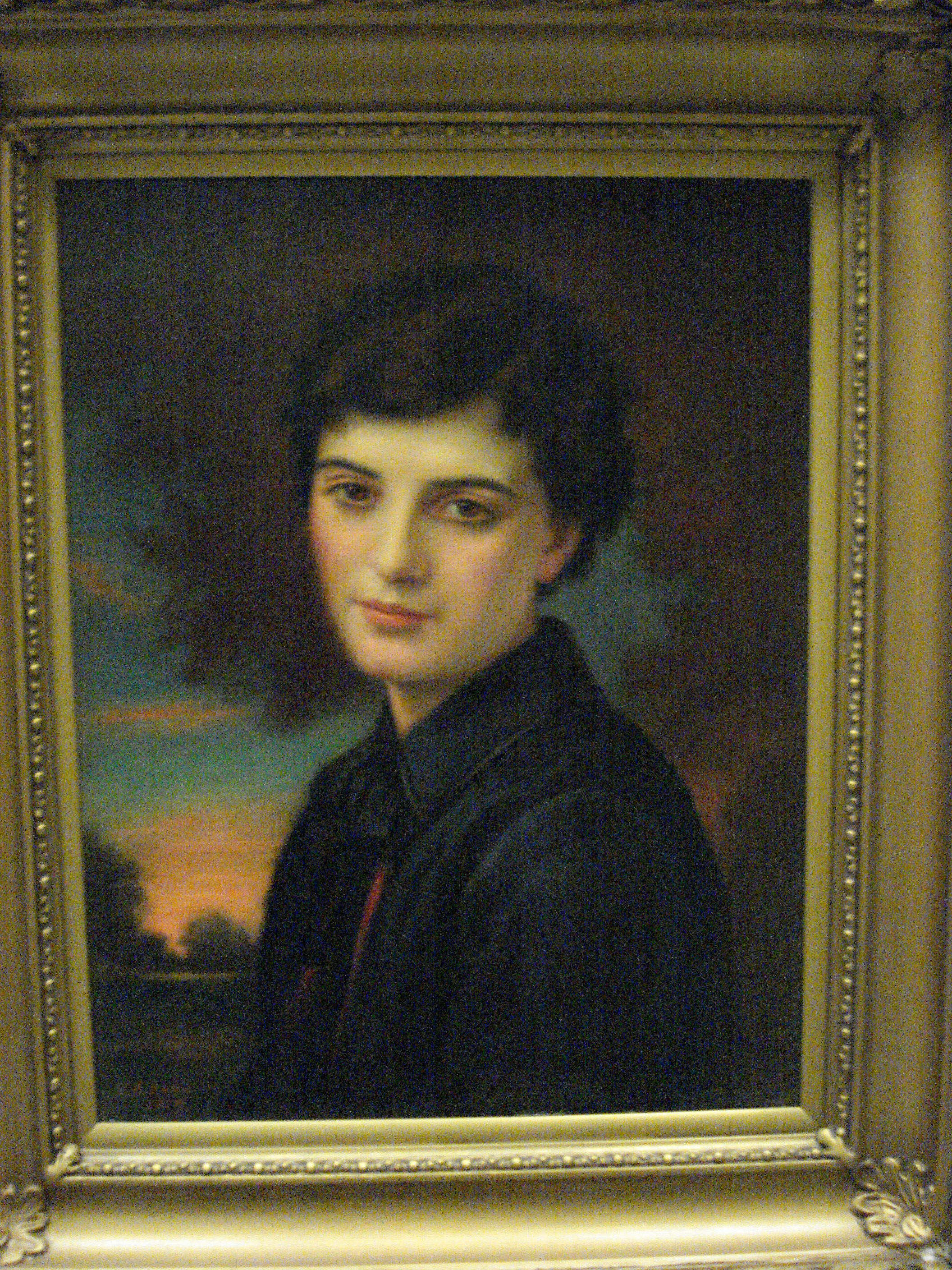 Editor’s note: Kevin is a Master’s of Archival Studies candidate at the School of Library, Archival and Information Studies (University of British Columbia). Kevin returned to the Archives in Fall 2012 for a Professional Experience course helping our Digital Archivist Glenn Dingwall research the administrative history of the Engineering Department.