Posted on May 2, 2013 by Students | Comments Off on Our students – Dorcas Tong

My summer internship at the City of Vancouver Archives was filled with wonderful experiences along with the occasional adventure, so much so that it has taken me a while to catch my breath and finally write about it. As a student in the Master of Art Conservation program at Queen’s University, the Archives fostered an ideal learning environment for a conservator-in-training to reinforce the skills acquired through the past academic year. I was fortunate to learn from not one but two experienced conservators. Working under the supervision of Sue Bigelow and Rosaleen Hill, the Digital Conservators at the Archives, I had the privilege of taking in a double dose of valuable knowledge. 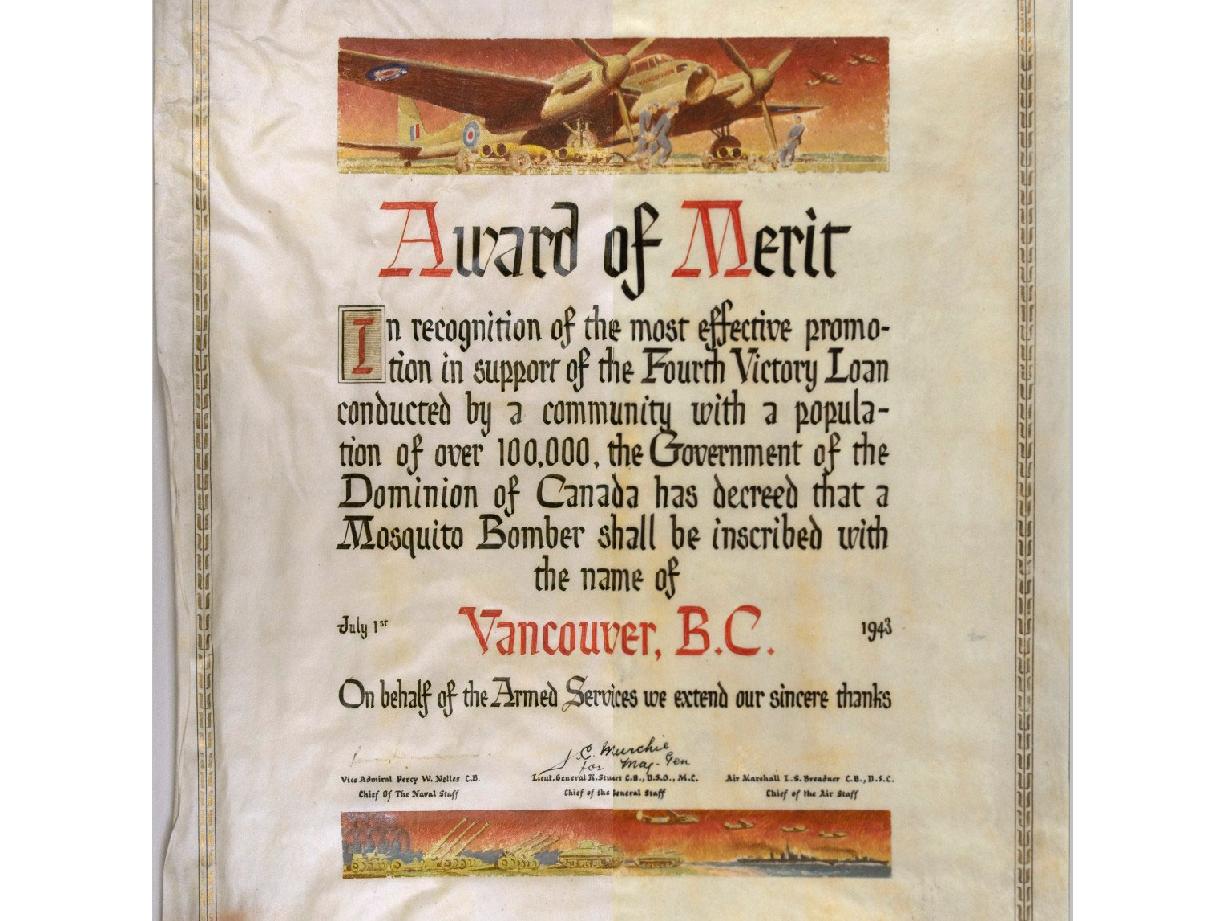 The Award of Merit 1943, one of the many spectacular works of art found in the Archives. This image consists of merged photographs of the parchment before (left) and after (right). treatment.

Upon arriving at the Archives, I immediately had the chance to familiarize myself with the holdings in a more tactile manner. I carried out a condition survey on the documentary art collection. The project involved examining the condition of the artwork and proposing the appropriate conservation treatments. Not only was a condition survey crucial in grasping an overview of the state of the collection, a proper identification of the media also helps archivists describe records with greater accuracy. Leafing through the documentary art collection was similar to taking a visual stroll down the history of the city. For example, the collection contains numerous watercolour paintings depicting recognizable Vancouver-like natural landscapes and albums of original cartoons from local newspapers satirizing the socio-political atmosphere of the city throughout time.

Through the condition survey, I was able to select a few objects that posed interesting conservation problems to treat. The opportunity to handle and treat many of these historically significant artifacts had me buzzing with excitement; I was like a kid in a candy store! One of the most challenging objects that I treated was an albumen print lined onto a cardboard support of the 1890 Vancouver Police Force. 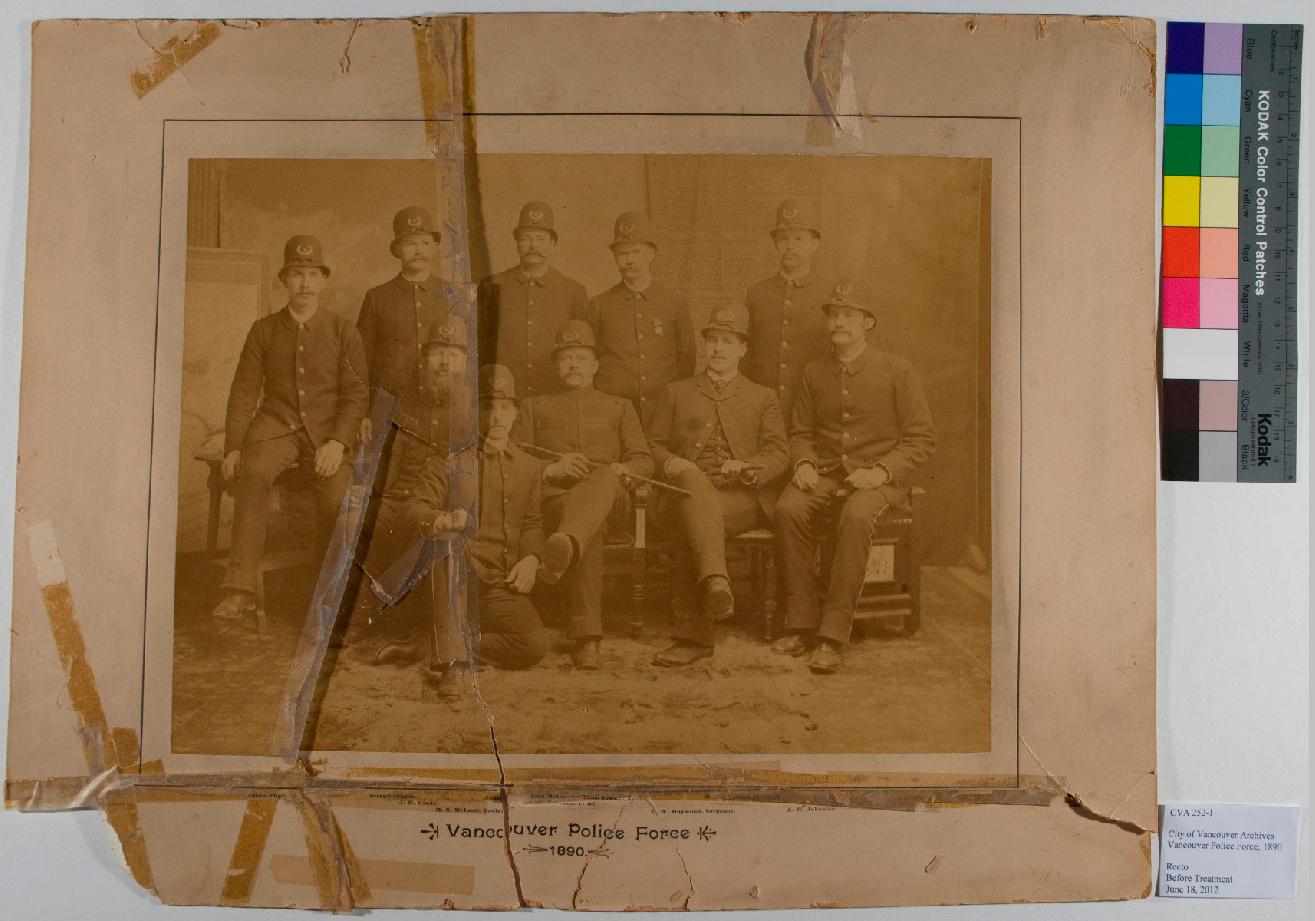 The albumen print of the 1890 Vancouver Police before treatment. Item number CVA 252-1.

The print had suffered from severe physical damage as a result of poor handling prior to being acquired by the Archives. The physical damage was so extensive that it had mostly fragmented the print into what looked like a jig-saw puzzle. Surprisingly enough (or not so, in the world of archives), the tears through the print were not the most urgent problem. Rather, it was the attempt to fix the tears that became the most alarming problem for the overall stability of the object. At one point, a well-meaning individual had attempted to repair the tears with a very generous application of clear adhesive tape. Although the tape kept all the different fragments of the print intact, the adhesive from the tape had also deteriorated over time and inevitably affected the aesthetics of the photograph. Most of the treatment for this albumen print was to remove the tape and its residues through a combination of mechanical and chemical techniques. 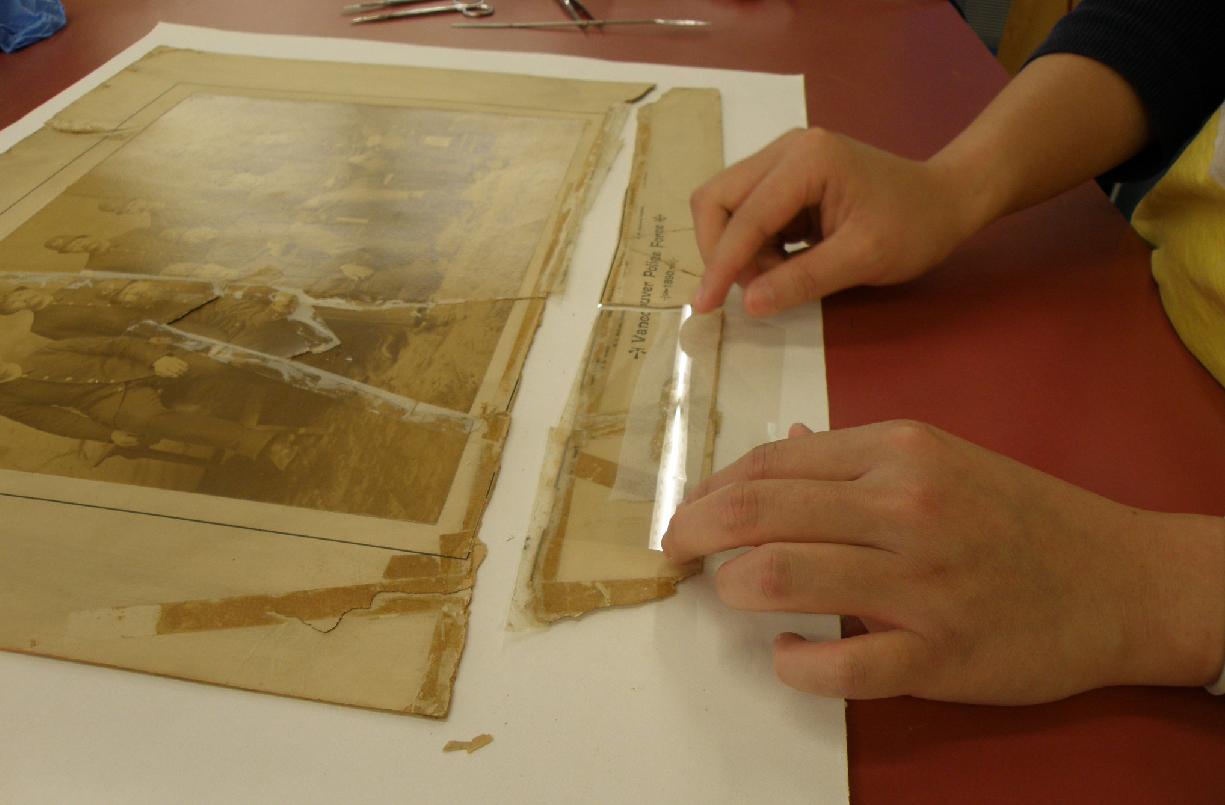 Using Laponite RD as a poultice to reduce the intensity of the adhesive residues. Photograph by Rosaleen Hill.

Mentioning tape removal treatment to any conservator is most often responded to with a grimacing look paired with a sigh of agony. Tape removal is a treatment that strikes terror in many conservators, particularly ones that specialize in archival materials because tapes are plastered on nearly half of the records in most holdings and it is a time-consuming process that doesn’t often give satisfying results. To complicate matters even more, chemical ingredients are constantly changing in the composition of the adhesives found on commercially produced tapes, such that there are no standard solutions to cleanly remove tape. After countless number of hours slicing away tape carriers and reducing adhesive residues with a variety of chemical concoctions, I am pleased to say the albumen print has finally returned to a stable state with the image liberated from the tangled mess of degrading tapes. 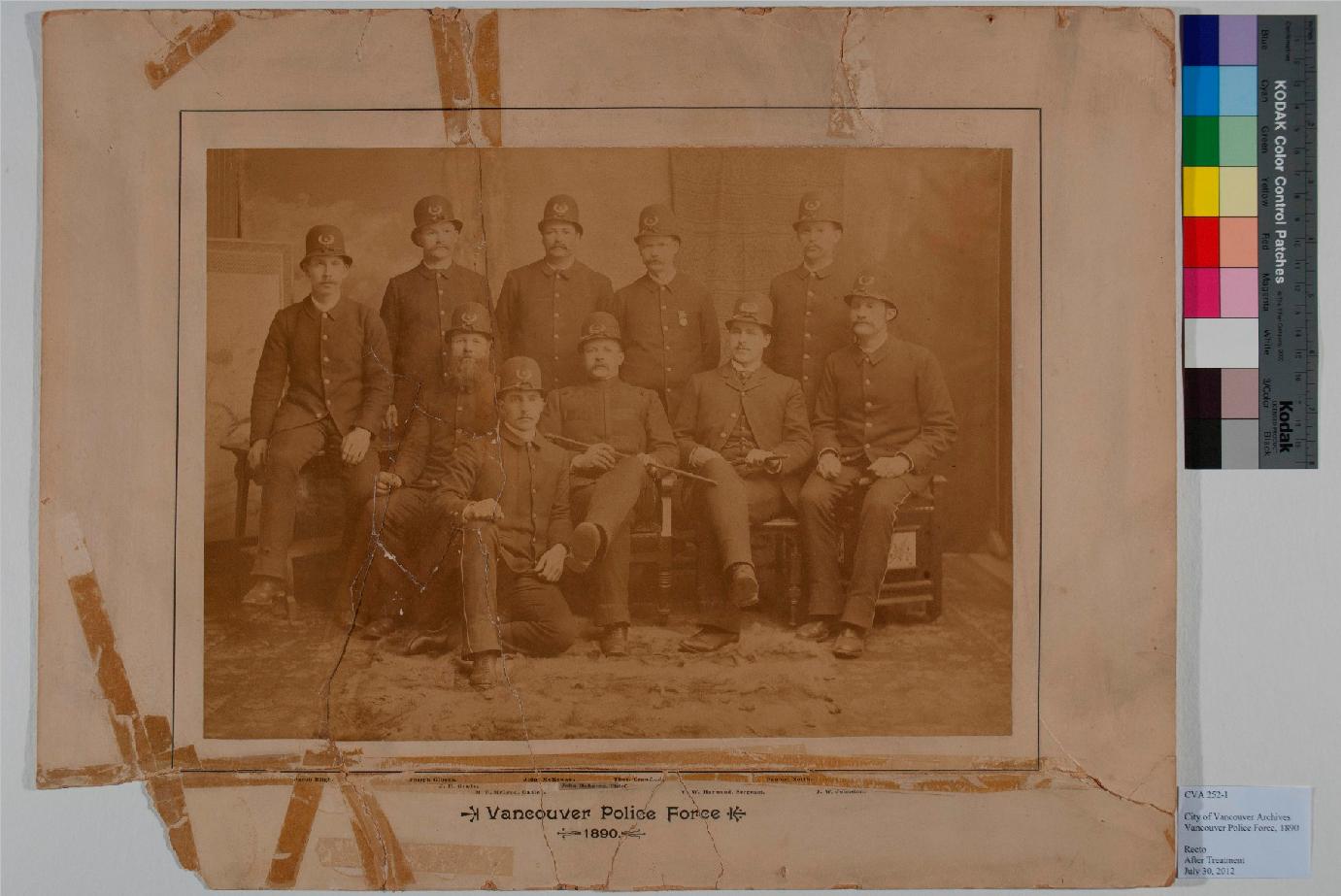 The albumen print of the 1890 Vancouver Police after treatment.

The objective of most treatments carried out at the Archives is to stabilize deteriorating records and allow the information they contain to be used, over the need to enhance aesthetics. There are a few exceptions to this general rule, where the aesthetics of the object are important. The 1924 colour lithograph movie poster for the film Western Luck is one such instance. 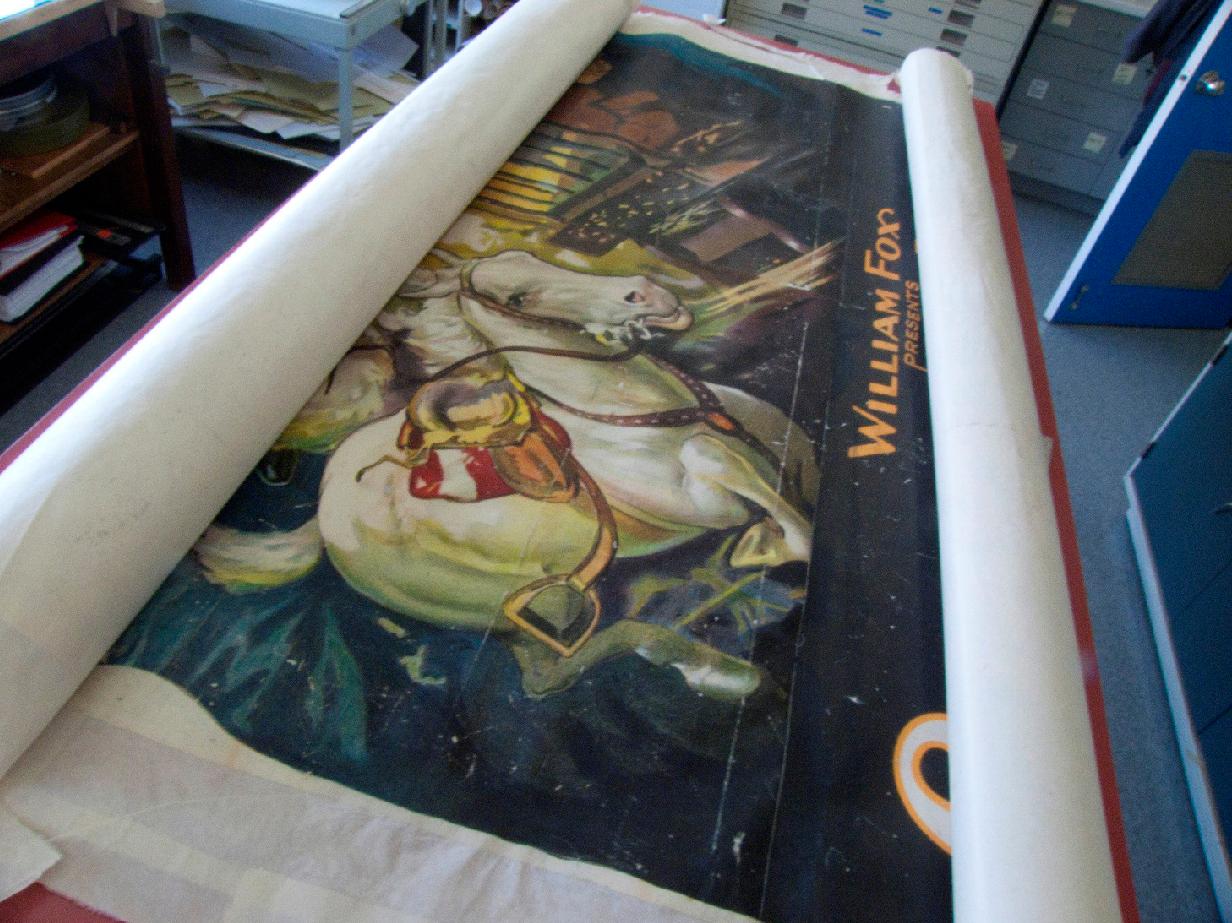 The Western Luck movie poster is so big that it barely fits onto our lab bench!

As one of the Archives’ ongoing long-term projects, the bulk of the conservation treatment had already been completed when I began work on the poster. My role in the project was to reintegrate the areas of losses back with the image on the poster by in-filling and in-painting. It was such an enjoyable treatment in retouching the movie poster that it was hard to believe this was work. The movie poster is still a work in progress but it is definitely on the right track to recapturing its former glory! 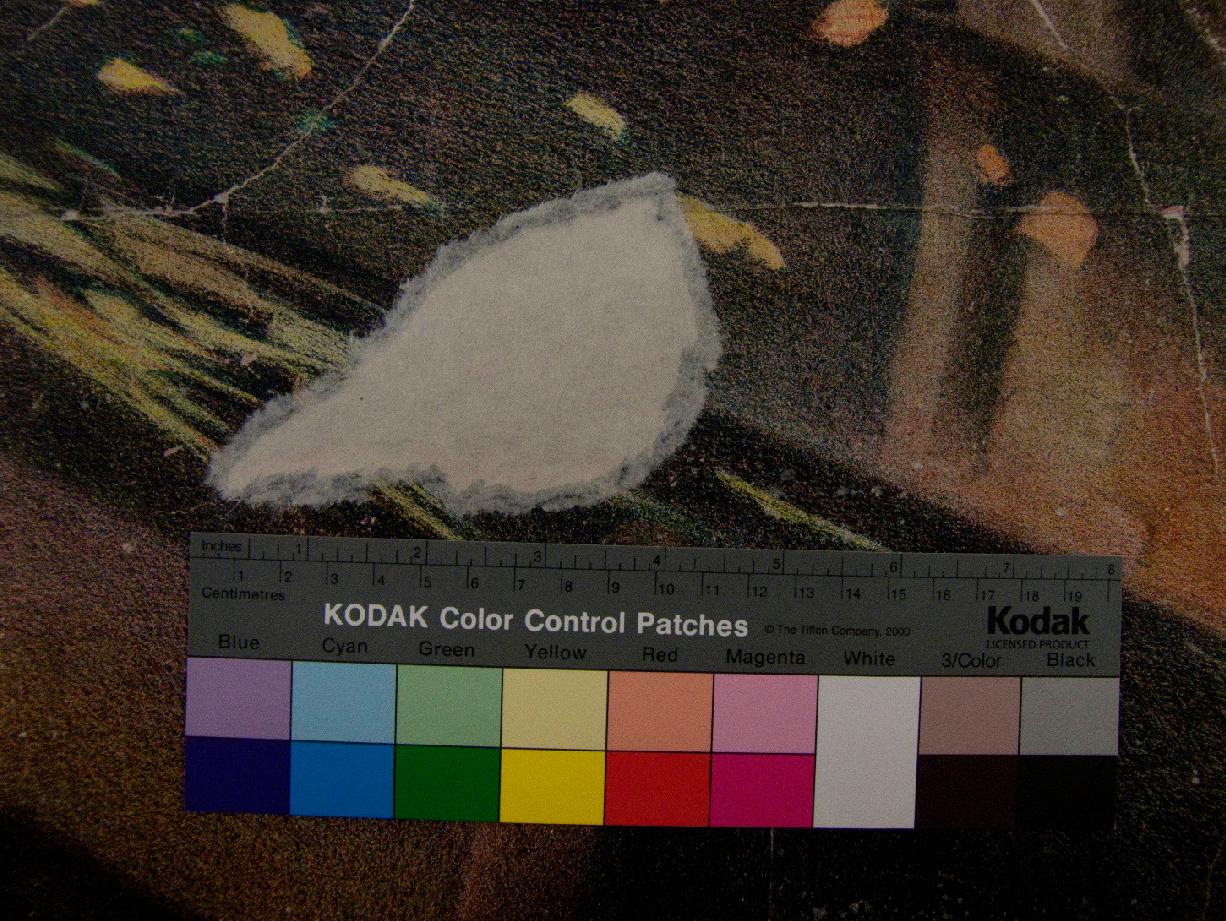 A loss in the poster that has been filled, but not inpainted . . . 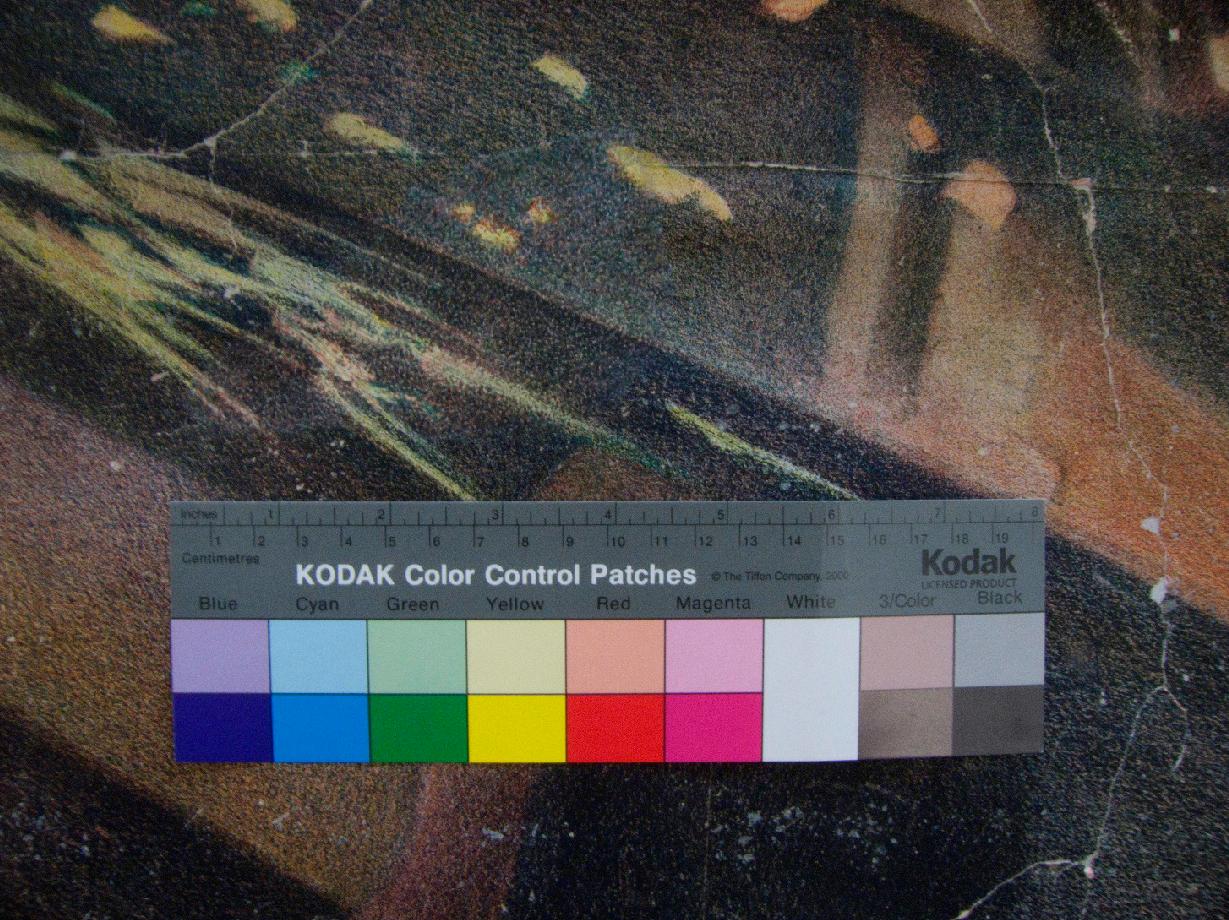 . . . and the same area after inpainting. 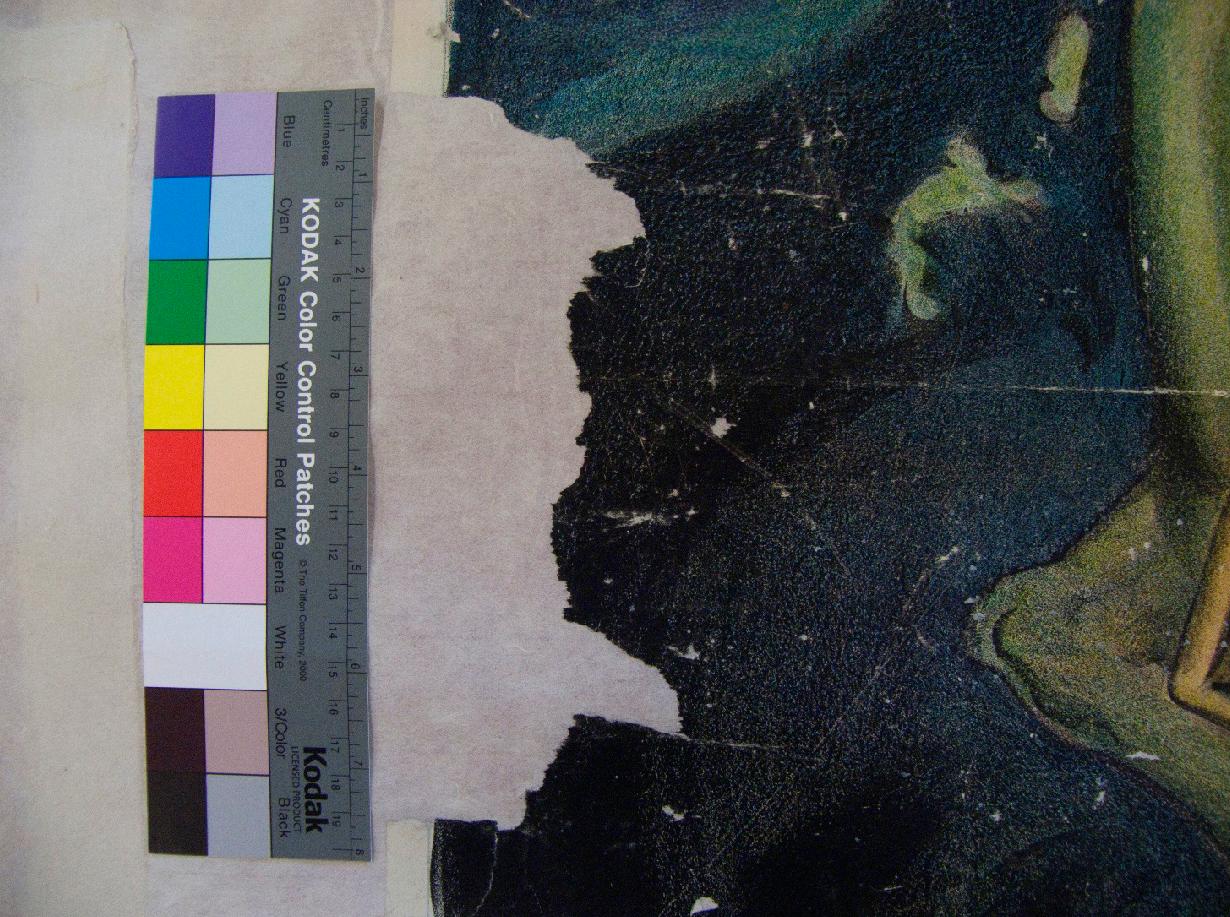 A much larger loss in the poster. It has been filled . . . 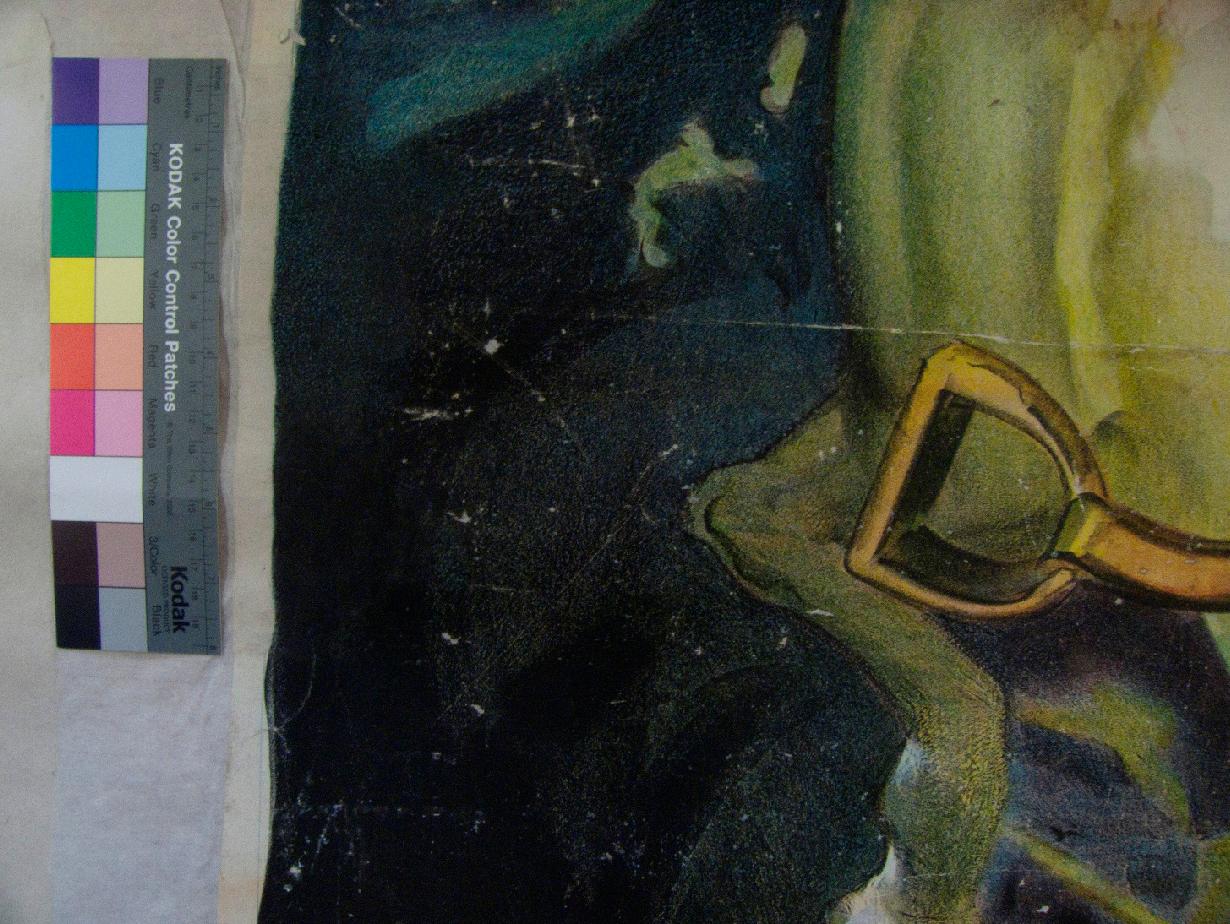 . . . and this is the same fill inpainted. Could you spot it if you didn’t know?

At the City of Vancouver Archives, I was truly immersed into every aspect of being a professional conservator. Some of those experiences were unexpectedly rewarding and I couldn’t have fully prepared myself regardless of how many hours I spent reading textbooks. 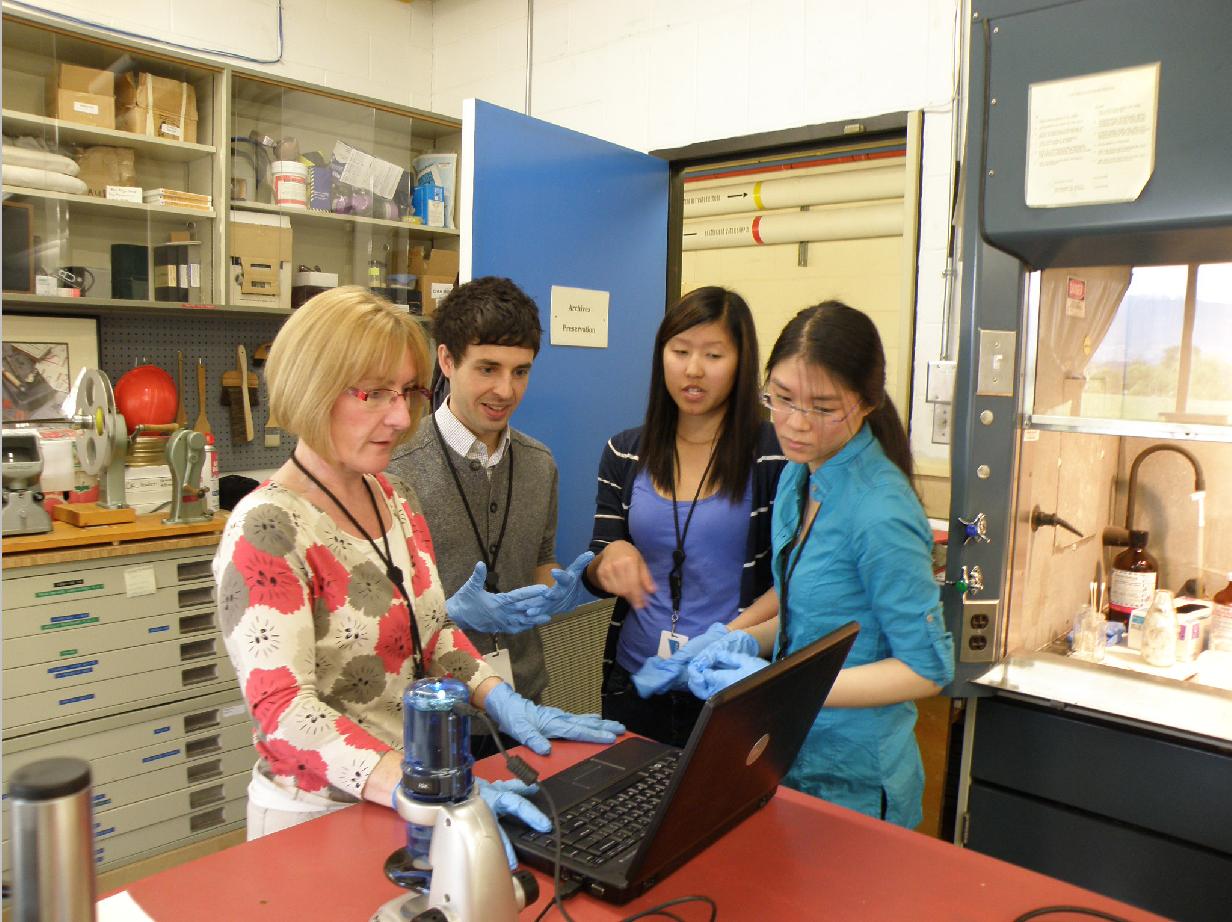 All the interns gathered around as Rosaleen talked about photo identification. Photograph by Cindy McLellan.

It is difficult to encapsulate twelve weeks worth of incredible memories into a few paragraphs, but few of the other highlights from my internship included the treatment on the hand-painted parchment of the 1943 Award of Merit; surface cleaning of glass-plate negatives; the acquisition of new records (which involved a lot more manual labour than I had anticipated!) and behind-the-scenes tours of the Vancouver Art Gallery and the Museum of Anthropology at UBC.

A large part of this amazing experience was made possible through the trust and patience Sue, Rosaleen and Heather (the Archives Manager- our fearless leader!) had shown towards me; and of course, the generosity from all the staff to welcome me into the Archives for a few short months. I couldn’t have asked for a more enriching internship experience than the one I had at the City of Vancouver Archives!