House history research is one of the most common reasons people find their way to the Archives. As such, we thought it would be helpful to write a series of blog posts on the type of resources we have to help in the quest. To illustrate the process, I have chosen a house located at 2116 Maple Street to research. This post will introduce the fire insurance maps, water service records, and building permit registers in the Archives’ holdings.

I begin my search by starting with the fire insurance maps. 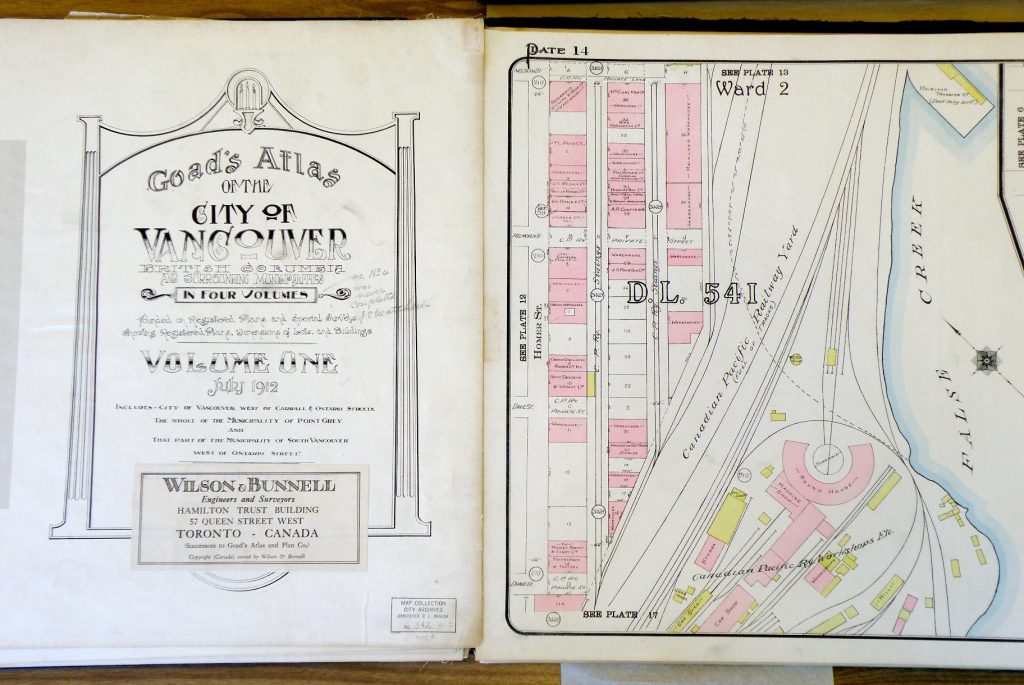 Fire insurance maps or atlases were created as a way to quickly appraise the risk and distribution that architectural and environmental factors posed should a fire break out. The first Vancouver fire insurance atlas was produced by the Charles E. Goad Company in 1912. Charles Goad also created the system of partial revisions, allowing for multiple corrections slips to be printed on one page, cut out, sent out to the underwriters, and finally pasted over the area of the map requiring updating. This decreased the need for printing completely new editions each year, thus making updating the maps economical. Consequently, the later fire insurance atlases (Map 599 and Map 610) include a date range, rather than one specific year. By 1975, due to company amalgamations and the changing needs of the insurance industry, fire insurance maps ceased to be produced.[1]

To access the Goad’s 1912 atlas, I like to go to VanMap, the City’s GIS system, since the atlas was released as a layer option in 2015. Click the “Start VanMap” button and, once in VanMap, I insert the address and click “Go”. Using the tool bar on the left side of the screen, I make sure “1912 Goad’s Fire Insurance Map” is checked. This is found under the option of “Aerial Imagery.”

An advantage of viewing the 1912 fire insurance map through VanMap, rather than the microfiche in our Reading Room, is that it is in colour. The colour of the buildings indicates which type of material a building was constructed: yellow indicating wood, and pink indicating other building materials, such as brick or stone.

The address I am searching will appear in a highlighted green rectangle. 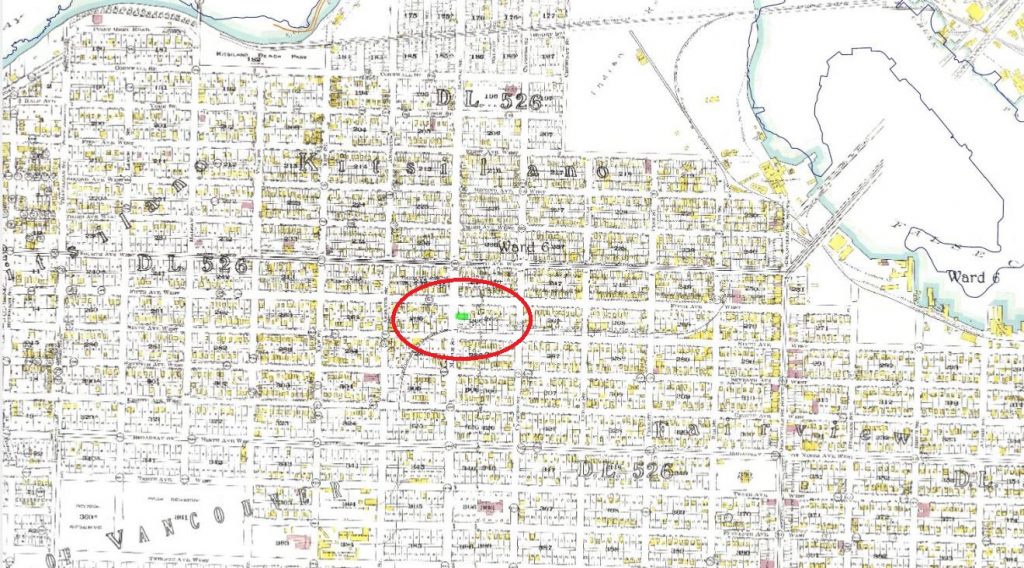 A neighbourhood view of 2116 Maple Street on VanMap

To zoom in on the property, keep clicking on map, near the property to centre it on your screen. 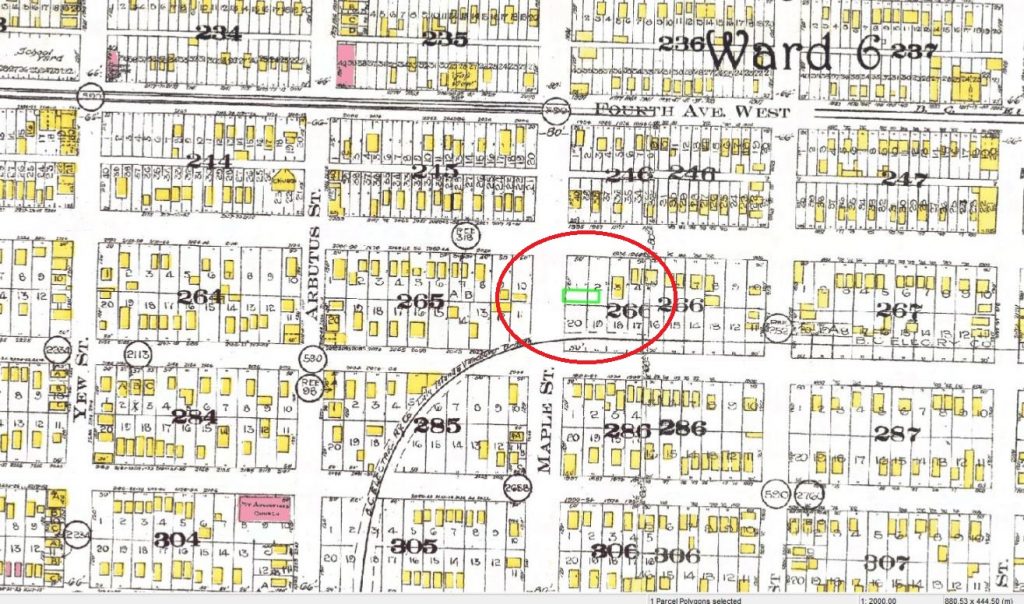 Even though the house I am researching was not present on the 1912 map (likely because it had not yet been constructed when that portion of the map was surveyed), the map still provides some interesting clues. First, it appears that the original lot division of the block was different than it is currently, with two larger lots (outlined in black) facing West 5th Avenue, rather than the four smaller lots facing Maple Street (the modern-day VanMap property lines in orange). Second, the map indicates that there were quite a few houses and other buildings, as well as rail tracks, in existence in the neighbourhood by 1912. 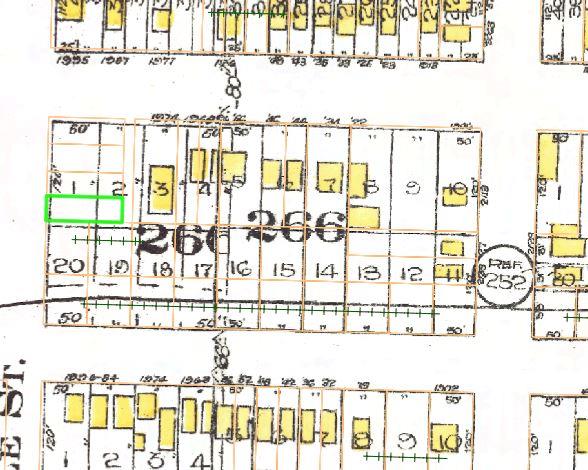 Property report from VanMap where the legal description can be found.

From Map 599, a number of things can be gleaned about the house and the property by using the Key of Signs (i.e. the map’s legend). First, which comes as no surprise, is that this building is a dwelling, as indicated by the “D”. It had a car park building (labelled “Auto”). The 1 ½ notation indicates that it is a one-and-a-half storey house. The “X” indicates wood shingles or boards were used on the roof. 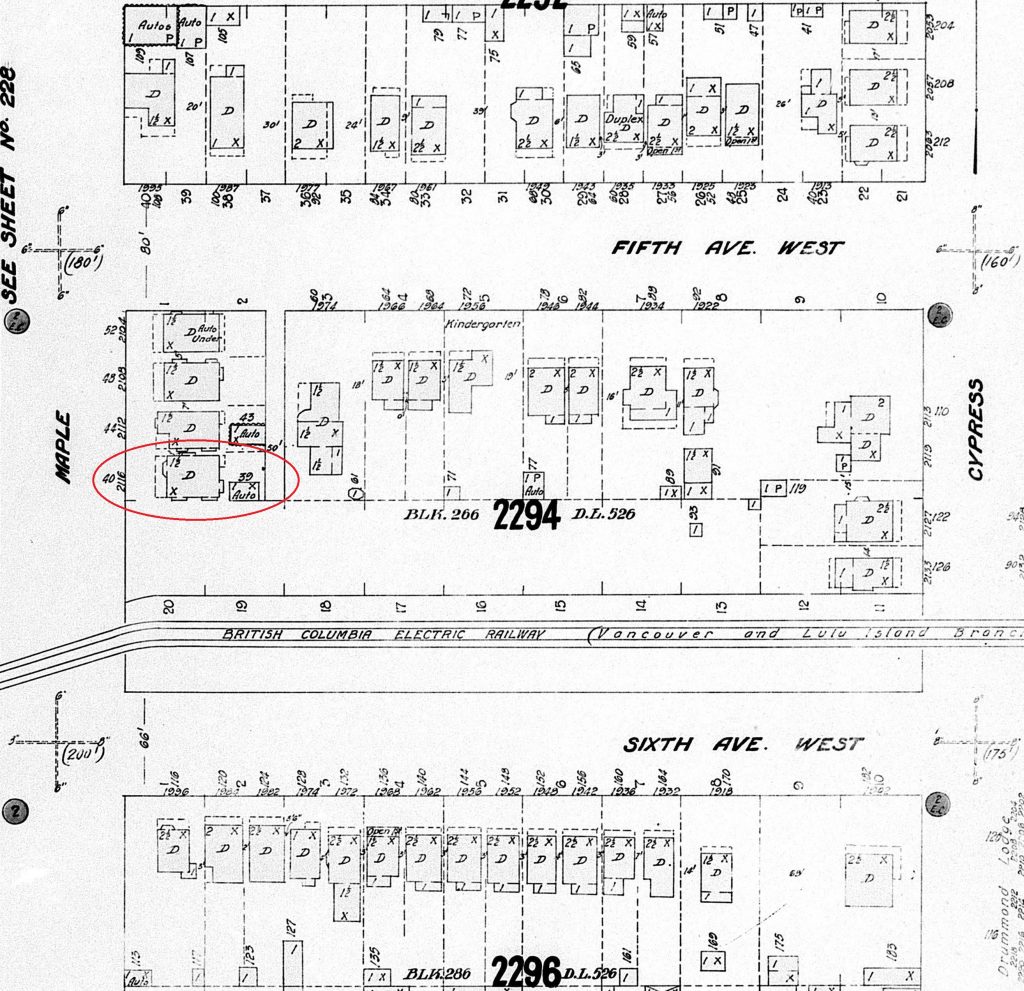 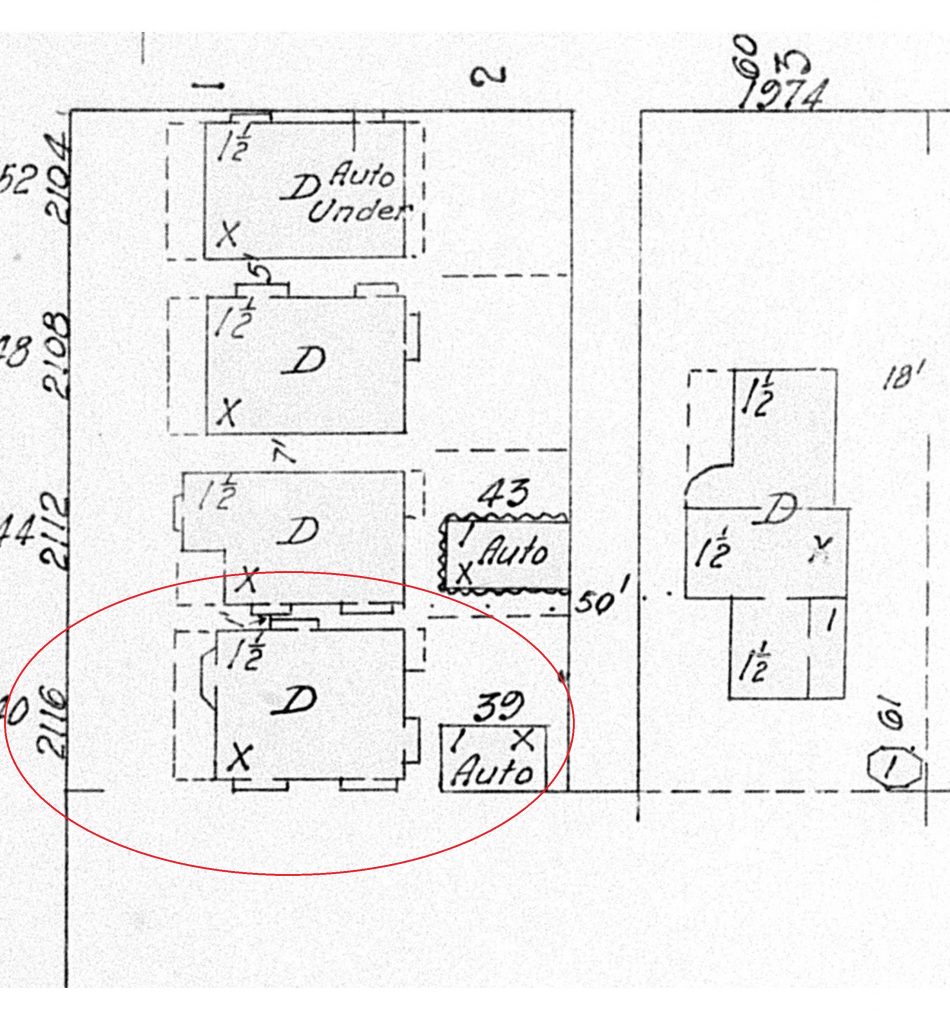 By comparing Map 342, Map 599 and Map 610, a bit of how the house and the neighbourhood changed can be surmised. For instance, the house as of Map 610 no longer had wooden shingles, but “patent, or tar & gravel” roofing. The garage also seems to have been removed. A building has appeared to the south of the house, and is contains a company related to insulating materials (this I cross-referenced with the city directories, which listed it as the Home Insulation Company). On a larger scale, some of the buildings in the neighbourhood have disappeared, while others have been built. 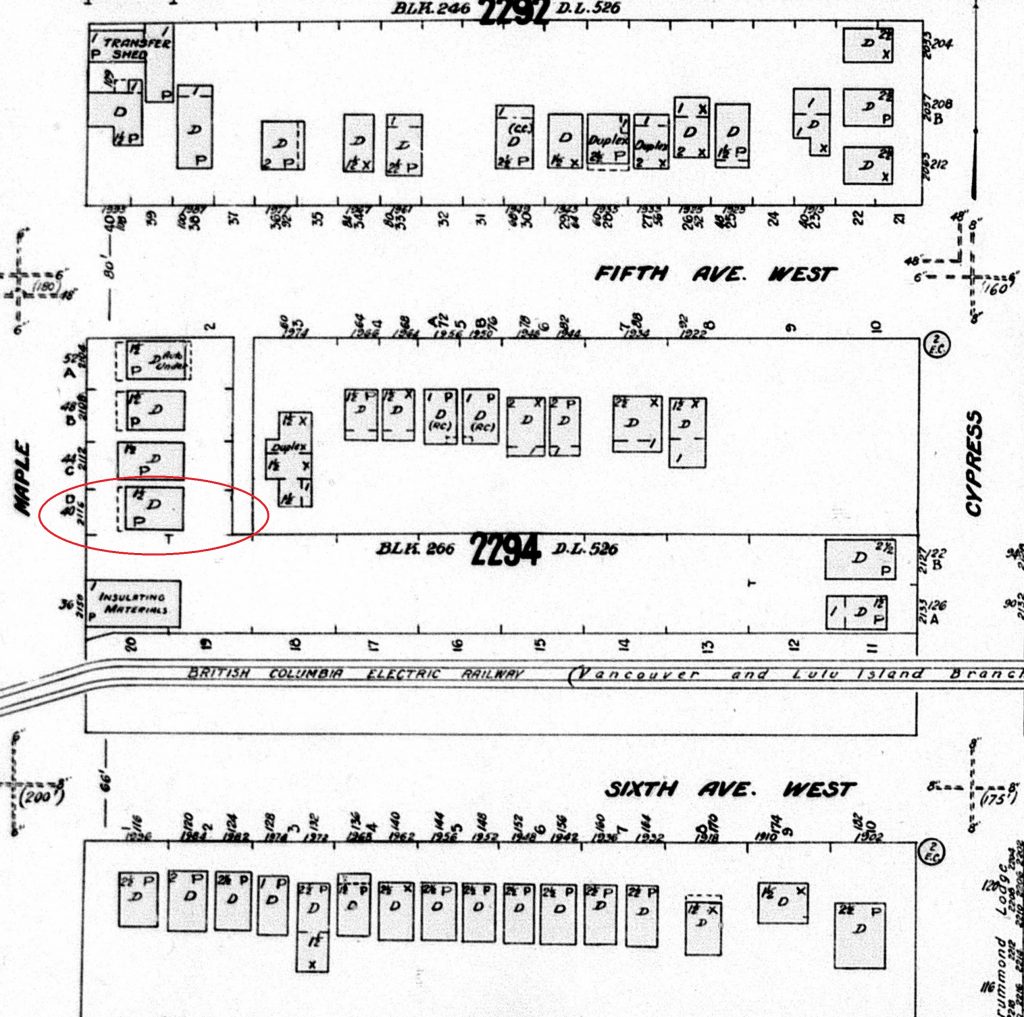 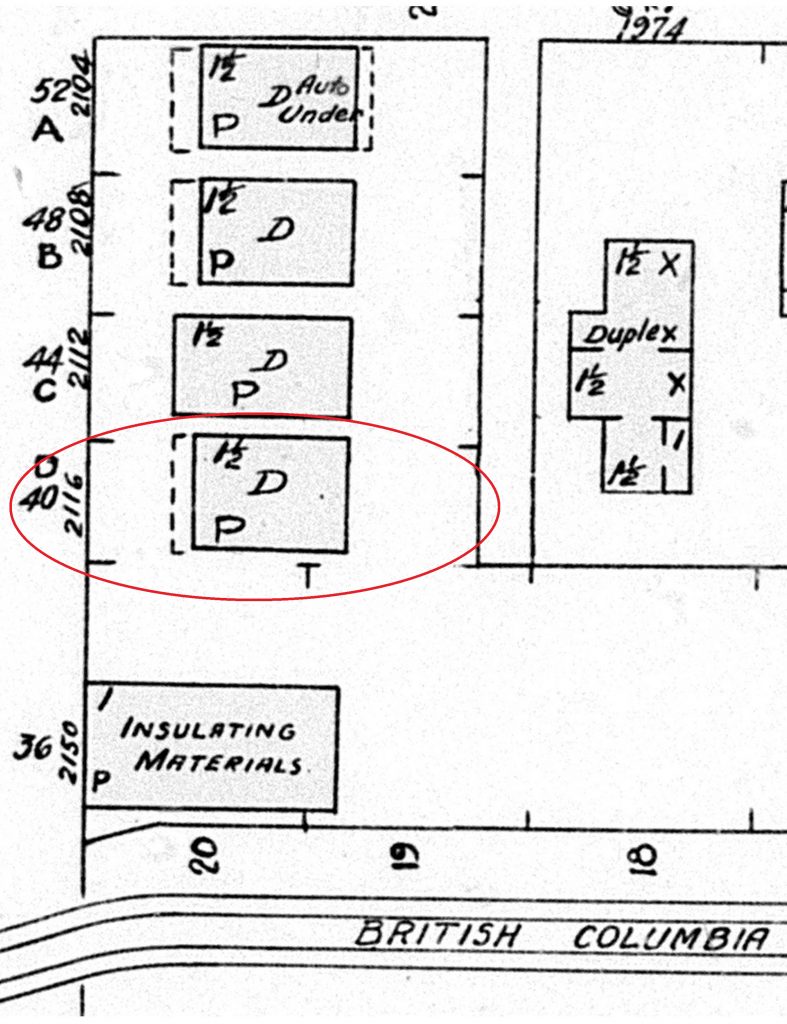 The next resource to consult after the fire insurance maps is the Water Service Records.

Water service applications are used to find the approximate year the house was completed, the name of the owner, the value of the water project, the legal description, and sometimes they give a hint as to the building’s use. Water service was usually the last utility to be installed, and hence why the date of the building can be taken from these records. The exception to this rule is researching buildings located in the Shaughnessy neighbourhood. Since this was C.P.R. land until the mid-1940’s, all water service records from that area are dated as 1945, or 1949, when they were connected into the City’s water lines, rather than the date a building was completed.

In the case of 2116 Maple Street, the house was built in 1912. The reason it did not show up on the 1912 fire insurance map was probably because it was under construction, or perhaps construction had not yet begun when that area was surveyed. From the original water service paperwork, I can see that the Vernon Brothers were the owners. 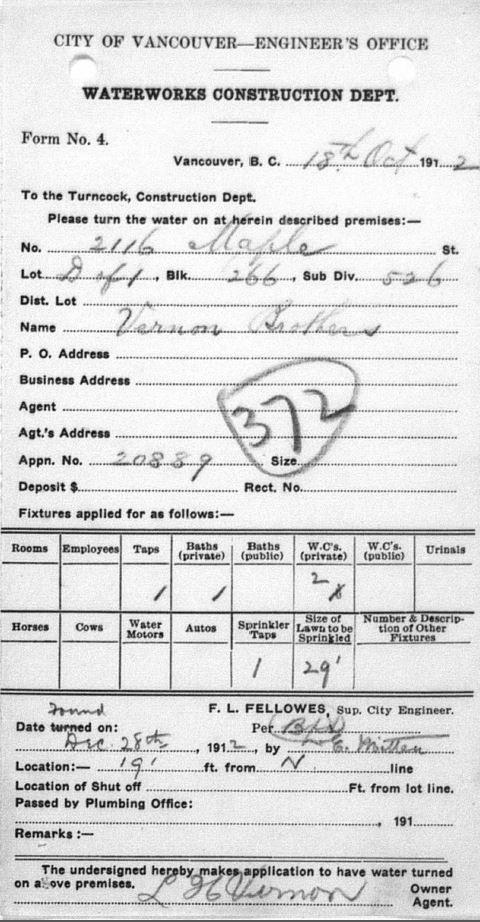 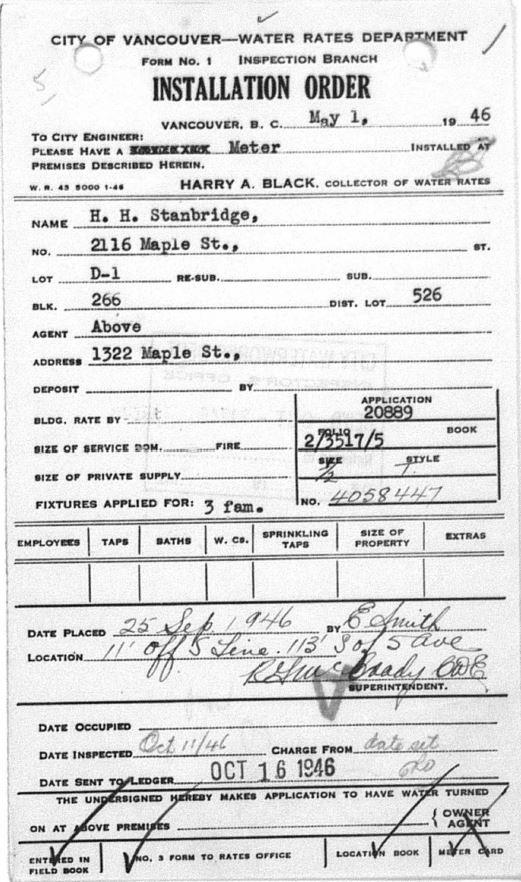 After the water service records, it is time to look at the building permit registers.

Searching the building permit registers is rather straight forward if the building is pre-1929, thanks to the Heritage Vancouver Society’s building permit database, where the original handwritten records held at the Archives have been transcribed. Knowing the legal description makes the search very easy. For buildings post 1929, more time and patience are required, as research involves reviewing the physical building permit registry books that are arranged by date, rather than by address or owner.

Knowing that 2116 Maple Street was built in 1912, I can easily find the permit data by entering the legal description into Heritage Vancouver Society’s database. 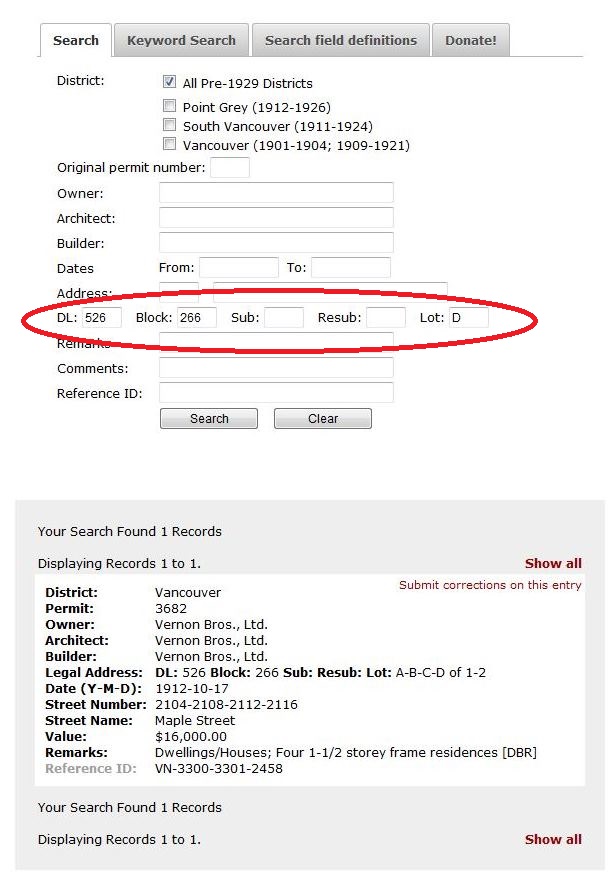 The building permit register data tells me that the house was built along with the three other neighbouring ones by the Vernon Bros., Ltd. Subsequently, the way in which the two lots were divided into four smaller ones makes more sense, given that the Vernon Brothers developed them all.

Looking for the records of a house built after 1929 involves looking through the pages of the building permit registers in the Archives’ Reading Room. Here is a sample page. 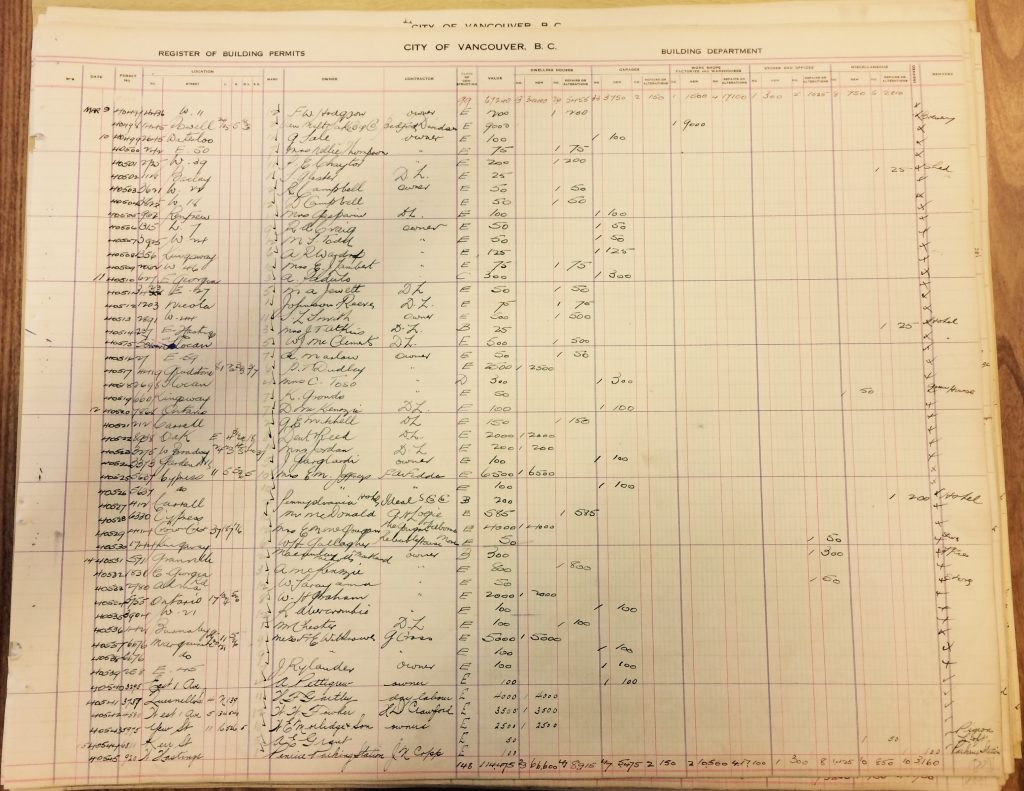 Now that I have gathered information from the fire insurance maps, water service records, and building permit registers, I am ready to do some hunting for photographs relating to the house and its neighbourhood of Kitsilano. Join me next time.

Written by: Bronwyn Smyth
This entry was posted in Holdings and tagged Fire Insurance Plans, house history. Bookmark the permalink.