You saw it on TV! In honor of Vancouver’s 125th, Shaw’s Urban Rush invited archivist Courtney Mumma to show some Vancouver highlights from every 25 years since its incorporation on April 6, 1886.

UPDATE: Here’s the video clip from the show. 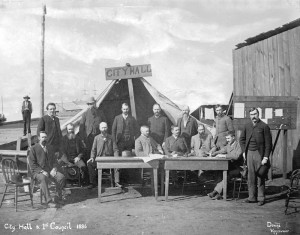 History buffs might be surprised to learn that this is actually a staged photograph. For a long time it was assumed that this photograph was taken about June 16, 1886,  immediately after the Great Fire of June 13, 1886, but it has since been proven that it was taken on September 8, 1886 by photographer J.A. Brock. The Mayor, Council and Council officials were assembled for a commemorative photograph with what appears to be a hastily re-constructed tent based on the one in which “all civic business has been transacted since the fire” (quote is from a contemporary newspaper article). City staff very likely erected a tent after the fire, but this hasty reconstruction may have been the work of anyone, including the photographer. 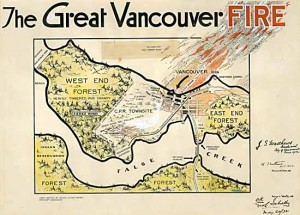 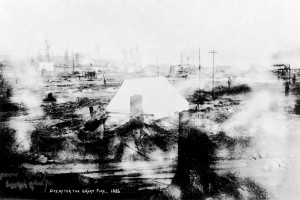 The City smoldered after the Great Fire, but was quick to get back on its feet. 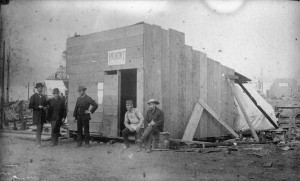 Tremont Hotel on Carrall Street between Cordova and Powell Streets, after fire of 1886. Item ﻿SGN 123. ﻿

By the time it turned 25, Vancouver was in the midst of a construction boom.  On our Flickr site, you can see the Moore Panorama view of downtown in 1913 from the top of the Dominion building that we featured on the show to illustrate the downtown construction boom in the decade. Below is a photo of construction workers laboring on the corner or Granville and Pender in 1911. 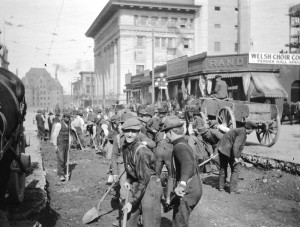 In fact, it was in 1911 that one of the City’s most beloved ivy-covered buildings, the Sylvia Hotel, started construction as its first incarnation, the Sylvia Court Apartments. 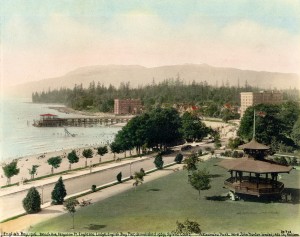 This is a photograph of English Bay beach taken in 1916 by Frank Gowen. The original silver gelatin photographic print was coloured by hand. The large building to the right is the Sylvia Court Apartments, looking very different without ivy.

Despite the construction boom, 100 years ago there were still people hunting cougars in Stanley Park! 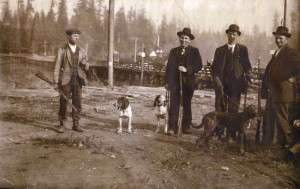 Cougar hunters and their dogs in Stanley Park at the foot of Georgia Street, 1911. Item VLP 86.2.

And a little girl whose family lived in the “wilds” of the Point Grey/Jericho Beach area played with her bear cub and dog on a leash. 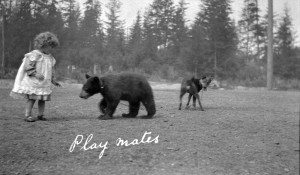 When the City turned 50, it got a brand new City Hall. 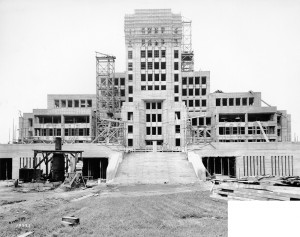 We also celebrated with a giant party called the Golden Jubilee. 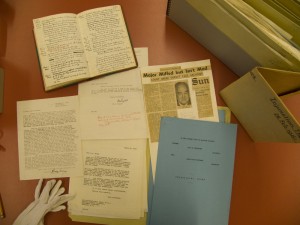 We were unable to show this tidbit on Urban Rush because of time constraints, but in 1961, the City filed a restraining order against Major Matthews! The first City Archivist would not return records to the City because he believed they were sacred and should be held in a dedicated City Archives. Matthews fought the good fight for the preservation of public records in an archives, and it was only a decade later that the City erected its purpose-built City Archives in Vanier Park. Without archives, Vancouverites would not be able to celebrate their rich past like they do today.

1986 was Vancouver’s Centennial. Expo 86 drew people from all over Canada, North America and the world. In the first clip below, you’ll see Princess Diana and Prince Charles opening the expo.  The second is a sped up combination of two videos showing the new Skytrain and then the gondolas riding above the festivities.

The above clips are from films created by Yaletown Productions.  We have their records which include a wide variety of film and video. The project to digitize and showcase some of the films, in conjunction with the City’s 125th Birthday celebrations, was based on the fact that Yaletown was highly active locally during the years surrounding Expo 86. Yaletown produced commercials for Expo 86, seen around the world, as well as films for the Ministry of Tourism, the BC Pavilion and the CP Pavilion; in the process, they created fantastic stock footage of our beautiful city.

Many thanks to Urban Rush hosts and producers for inviting us to share a bit of our holdings with the City on its 125th birthday.

One response to “Items Showcased On Urban Rush”