We have a very large and rare 1905 map in our holdings that was dirty and falling apart. Last year, we collaborated with the Land Title & Survey Authority of British Columbia (LTSA) and the BC Archives to conserve and digitize it. This is the story of why that conservation treatment happened and how it was done.

The 1905 Map of New Westminster District is almost 1 metre wide and over 2 metres long. It shows District Lots and other divisions of land for all of Metro Vancouver and as far east as Hope.

The LTSA has been actively conserving and digitizing the maps in its custody. Its own copy of this map is in very poor condition. The map was originally published for distribution but there are only a handful of copies left in public institutions. Although our copy was in bad condition, it was better than the others. LTSA proposed a pilot inter-institutional collaboration: the best available copy of the map would be conserved and digitized, the digital file would be distributed to the partners, and our paper map would be returned to us for storage and long-term preservation. Conservation and digitization work would be paid for by the BC Archives and LTSA.

The conservation work was complicated, as the map was in rough shape (and huge!). It needed to be cleaned so that all the information would be readable. Many pieces had fallen off or were barely clinging to the worn-out cotton backing fabric. The pieces had to be put back together so that it could be digitized safely. The work was done by Jean Topham, a Victoria conservator with decades of experience, with the assistance of Carly Wemyss. They provided us with photographs of the treatment process. 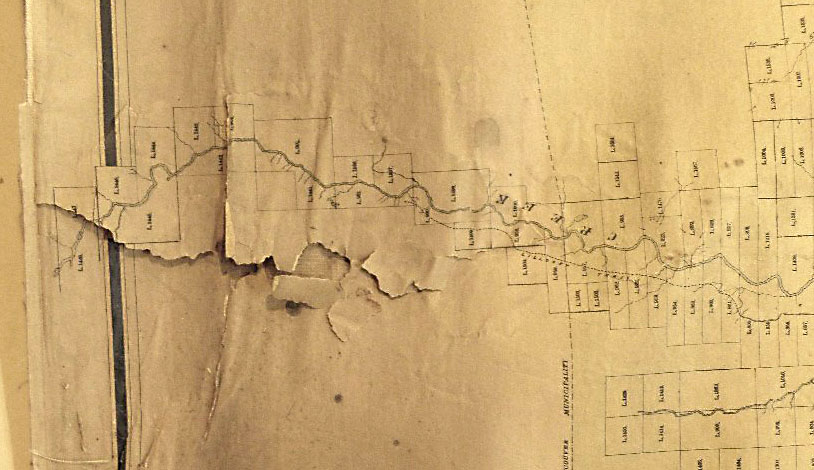 Detail of staining and tears before treatment.

The surface of the map was cleaned by hand. This had to be done carefully, since the paper was brittle and the map was in pieces in many places. 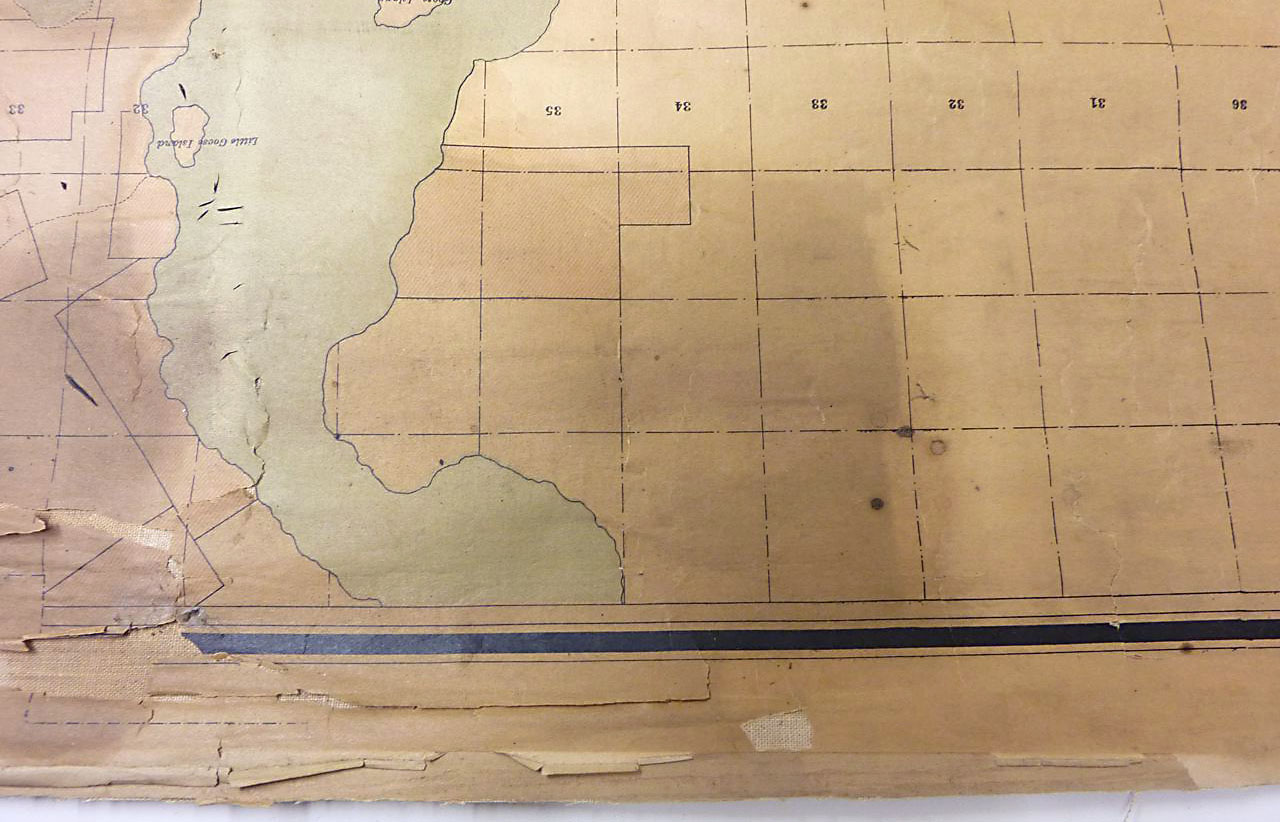 This shows the contrast of the light area that has already been cleaned with the area darkened by surface dirt and mold. Fragments of eraser are visible on the surface.

After cleaning with erasers, the surface was wet-cleaned with distilled water. The surface is fragile and becomes more delicate while it is wet. 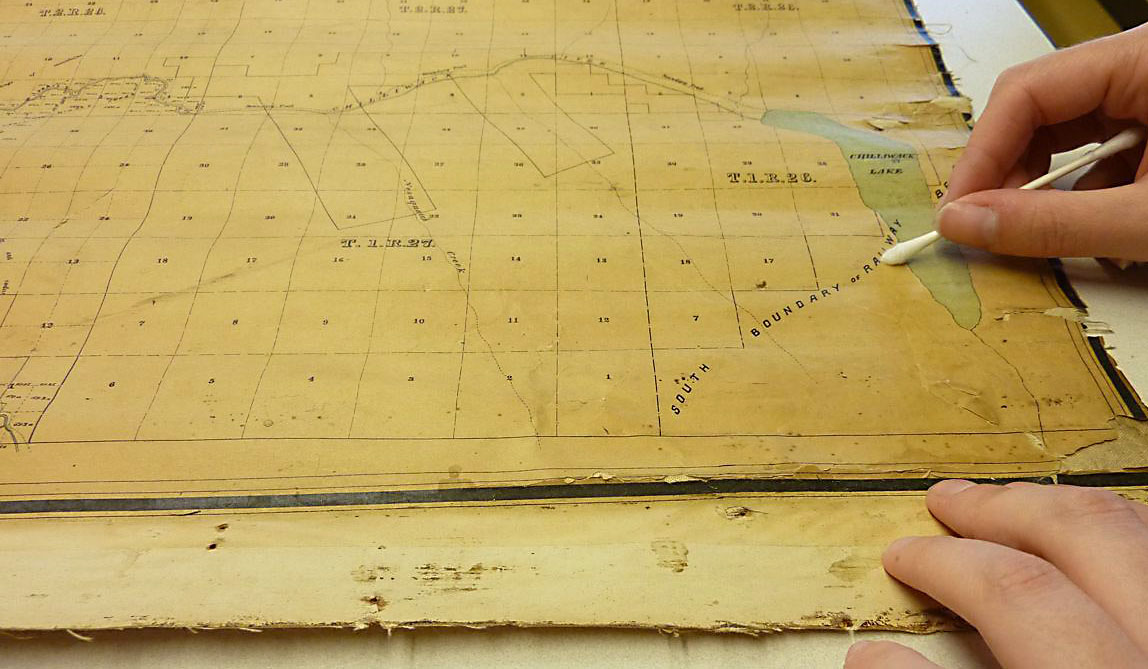 Cleaning with Q-tips and distilled water.

The old backing fabric was not capable of providing stable support for the paper map and needed to be removed. Before that could happen, the torn areas of the plan needed to be reinforced temporarily so they would stay in place. 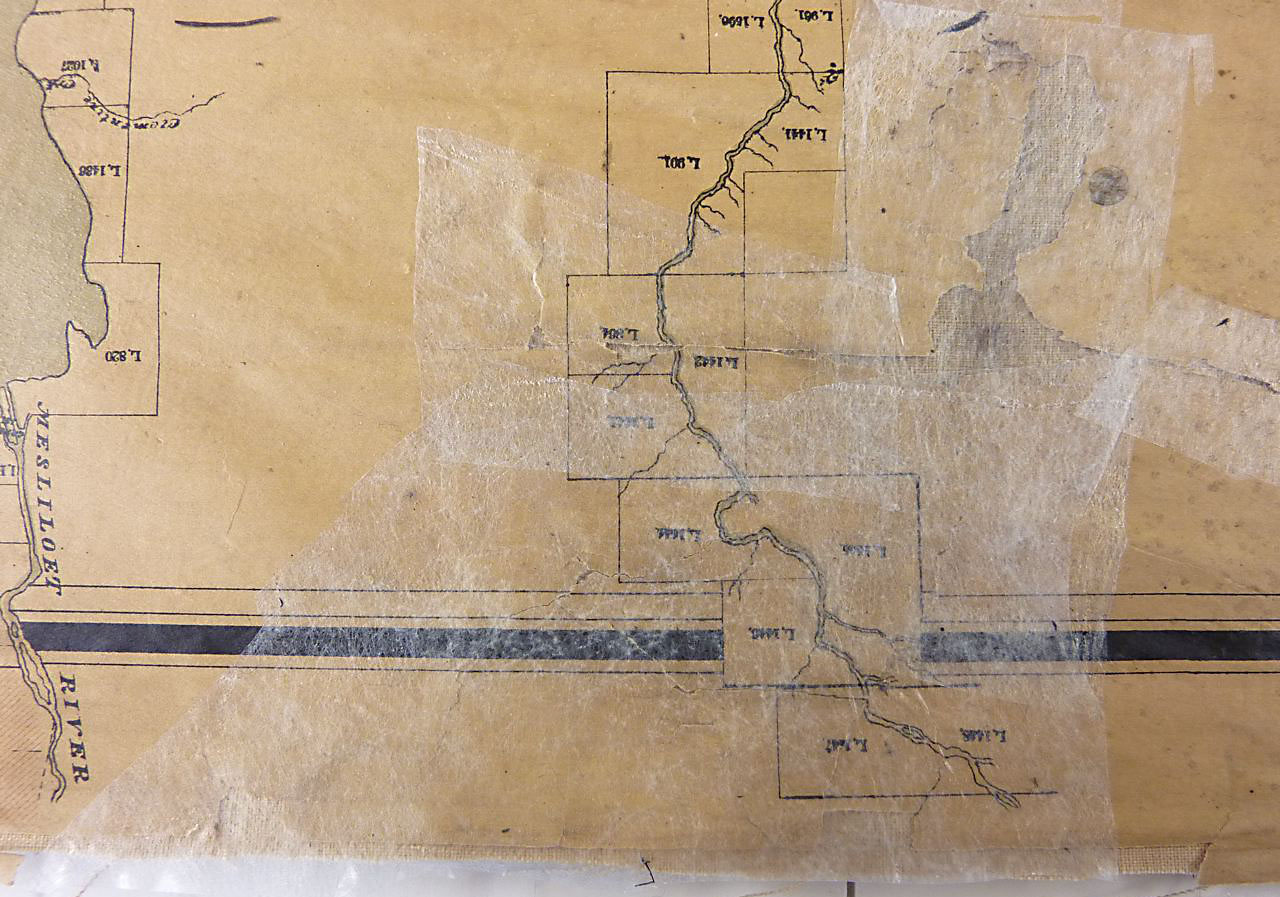 Hollytex polyester fabric applied to the front surface with an adhesive that won’t dissolve in water.

The map could then safely be flipped over. The old backing fabric was removed slowly, in sections, with water. Once it was gone, pieces of thin Japanese tissue were applied to the back where there were tears and losses. 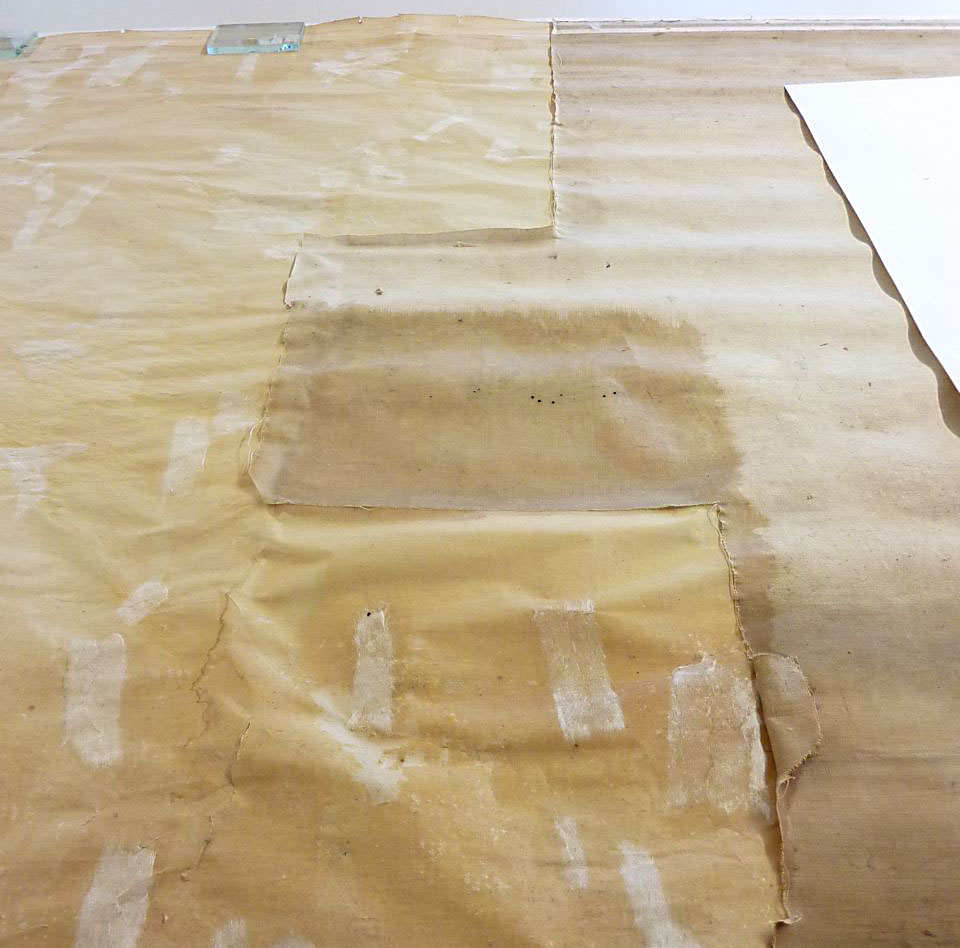 The cotton backing fabric has been removed from the left and front sections and tissue strips have been stuck down with starch paste.

With the tears and loose pieces secured with tissue on the back, the map could be flipped over and the Hollytex fabric on the front removed. 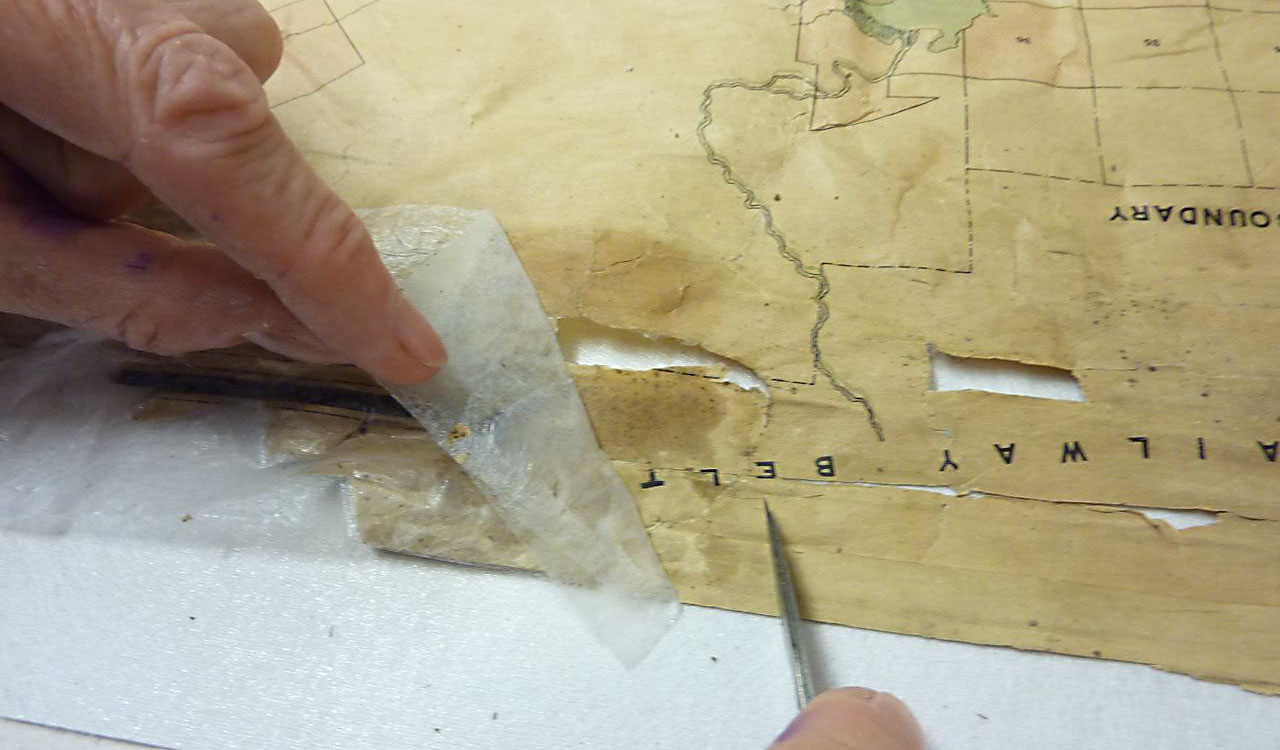 The adhesive on the Hollytex fabric was dissolved with solvent and the pieces peeled off.

Deacidification solution was sprayed on the back of the map to make the paper less acidic. 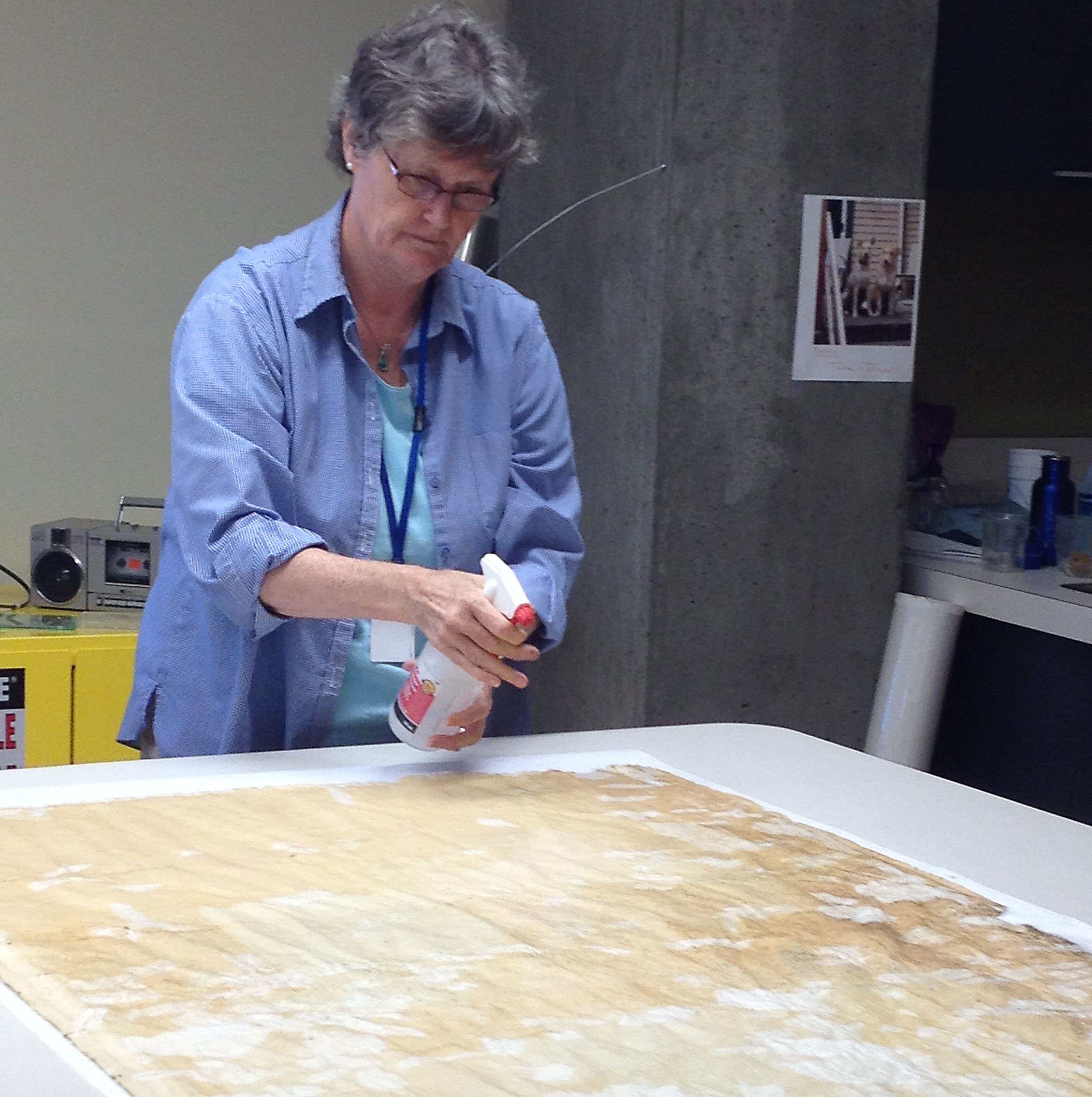 While the map was still damp, the back was reinforced with sheets of thick Japanese mulberry paper with wheat starch paste. The map was too large for this to be done easily by one person. 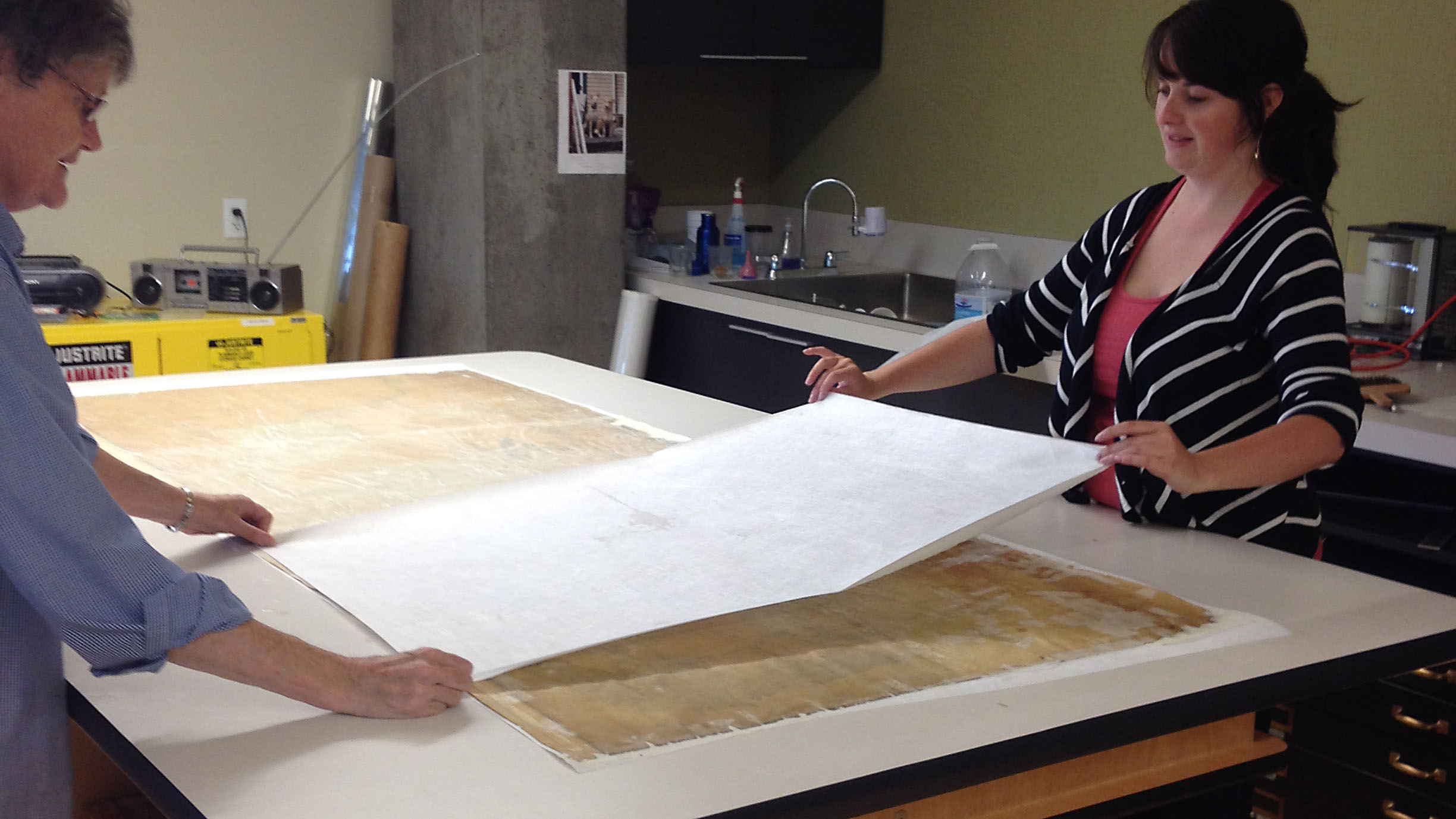 Jean and Carly lay down a sheet of backing paper. It looks very thick because it is being supported by a sheet of polyester fabric during this step.

The backing paper layer, without its polyester fabric support, was tapped to make sure it was well bonded with the map and there were no loose areas or air bubbles. 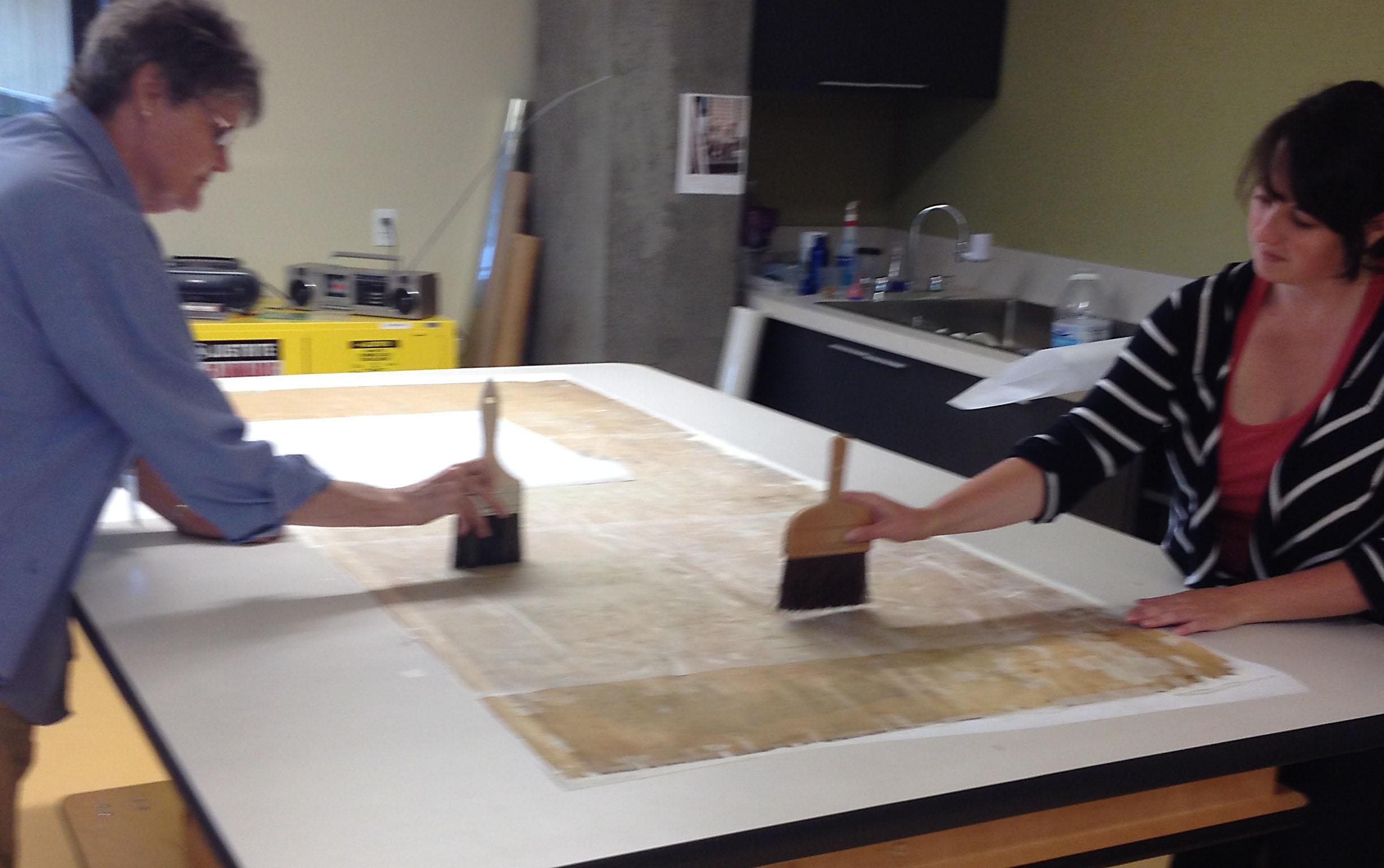 Jean and Carly tap the damp backing paper in place with brushes made for that purpose.

Excess water was removed from the backing paper using blotters. 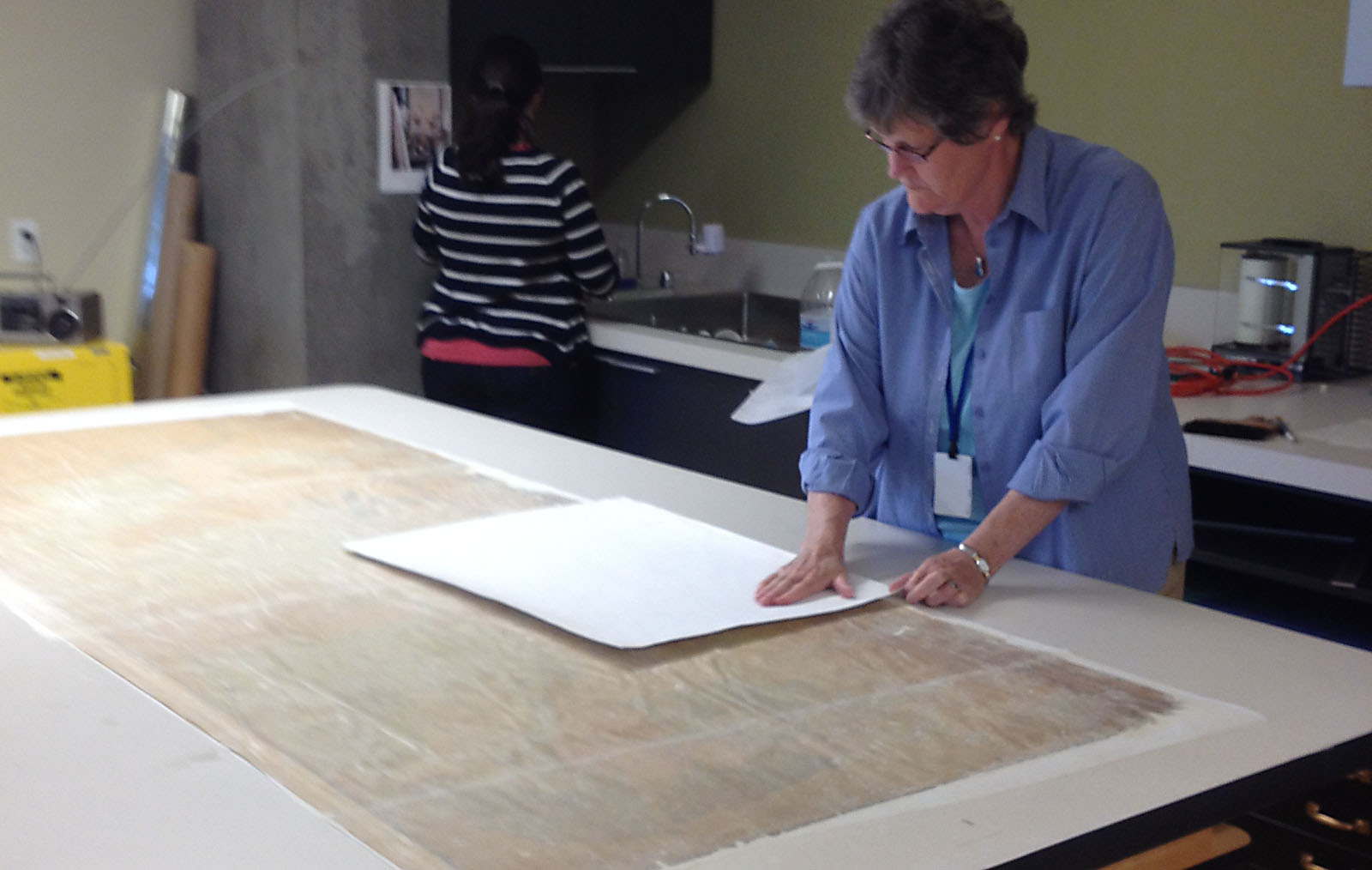 Jean removes dampness. The map is not perfectly flat at this point.

Last, translucent heat-set tissue was applied around the outer edges and linen tape was applied at both ends for added protection.

Heat-set tissue has been applied along the edge shown at left.

Now this map, which could only be viewed on a large table at the Archives, is available online in high resolution for everyone to use. We’d like to thank the LTSA and the BC Archives for their financial contributions and for managing this successful collaboration.

Written by: Sue Bigelow
This entry was posted in Digitization, Holdings, Preservation and tagged digitization, maps. Bookmark the permalink.

4 responses to “Map of New Westminster District – a collaboration”