While working on rehousing some of our map collection, I recently came across drawings from one of the more interesting unrealised development projects in the city’s past: a winter swimming pool and leisure complex proposed for English Bay in 1920. 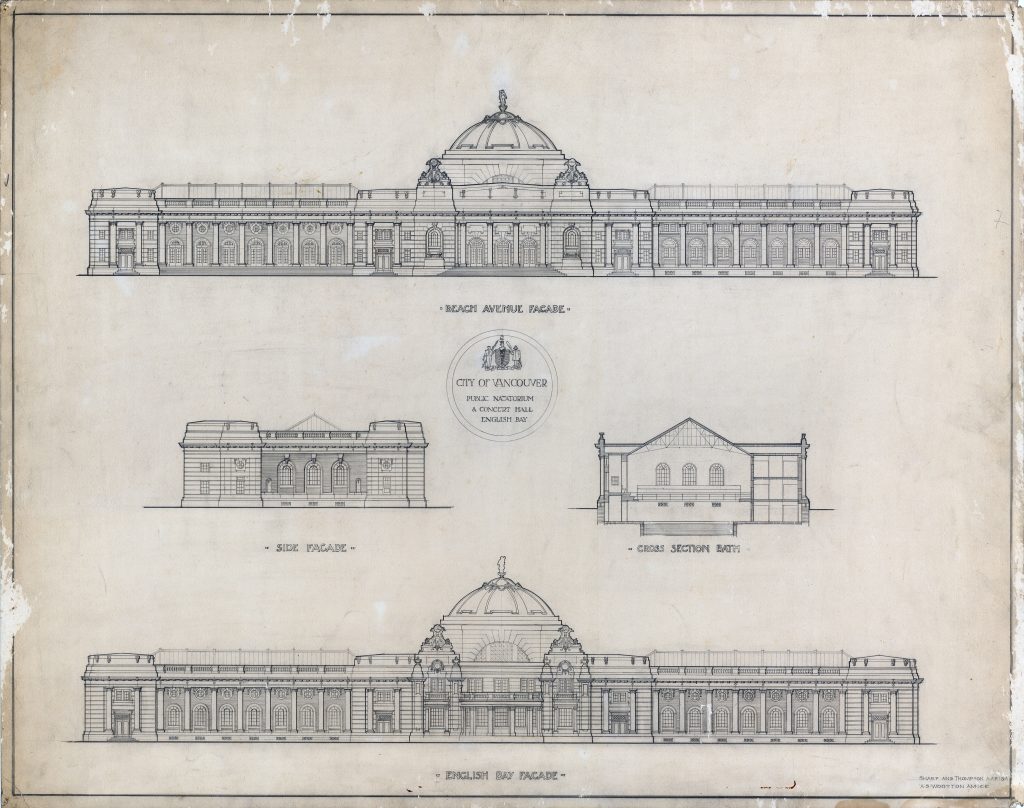 For over a century, English Bay beach has been one of Vancouver’s most popular playgrounds. English Bay has always attracted waterfront development, and in the early years, privately-built and operated bathing houses, as well as residences, lined the shoreline. 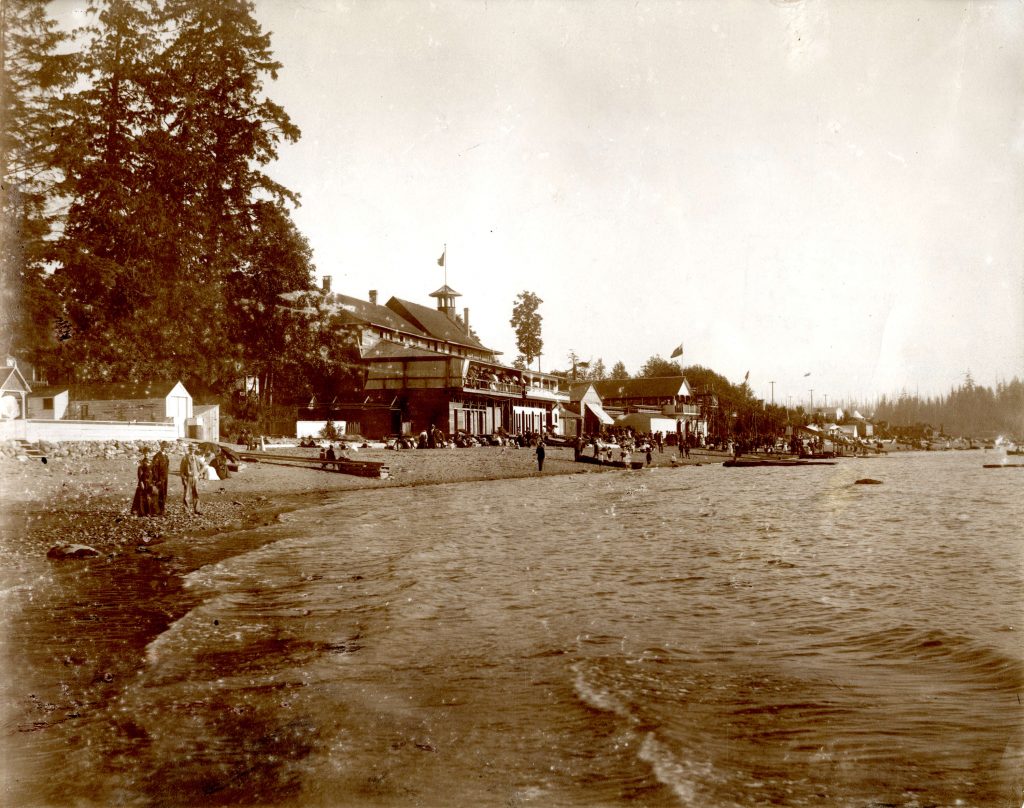 In 1901 City Council voted to purchase the lands along the foreshore between what is now Gilford and Bidwell streets and make improvements for a public bathing beach, and in 1902 and 1903, these properties were either purchased or expropriated by the City. These properties included the Pavilion Bathing House, which became first City-owned bathing house, located in the same spot as the current English Bay bathhouse. 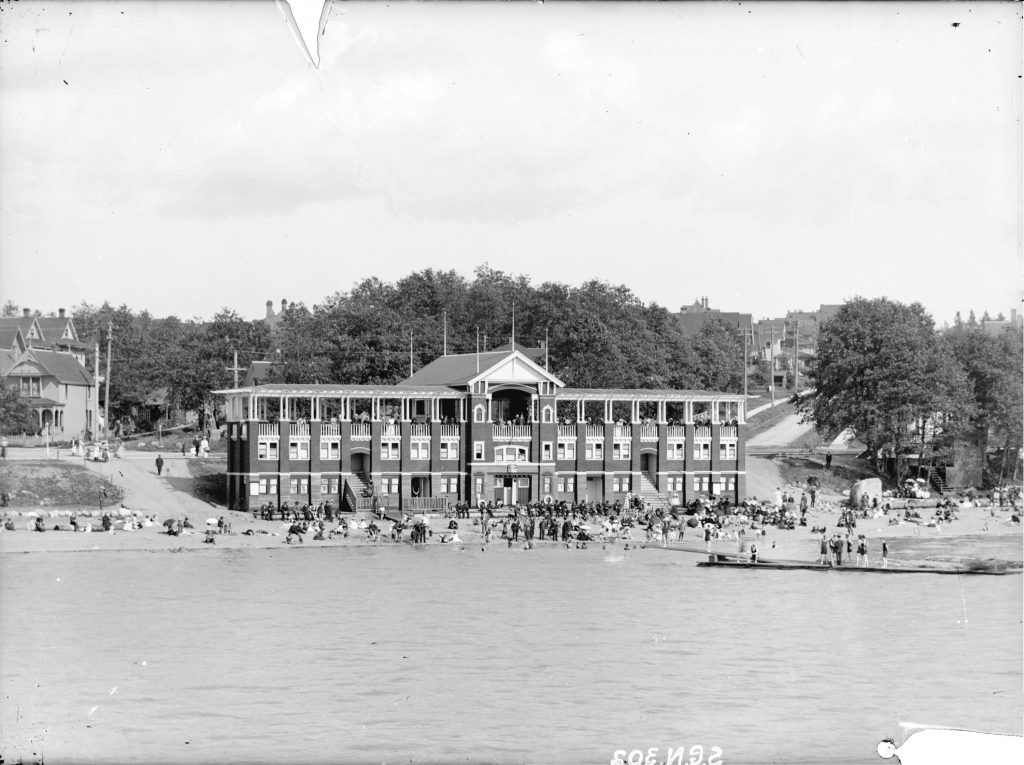 A growing population in the West End and a desire further develop the area led to the construction of a second bathing facility. In 1907, architect E.E. Blackmore designed the second of three bath houses at English Bay (finished in 1909), and for more than 20 years  the two buildings existed side-by-side. 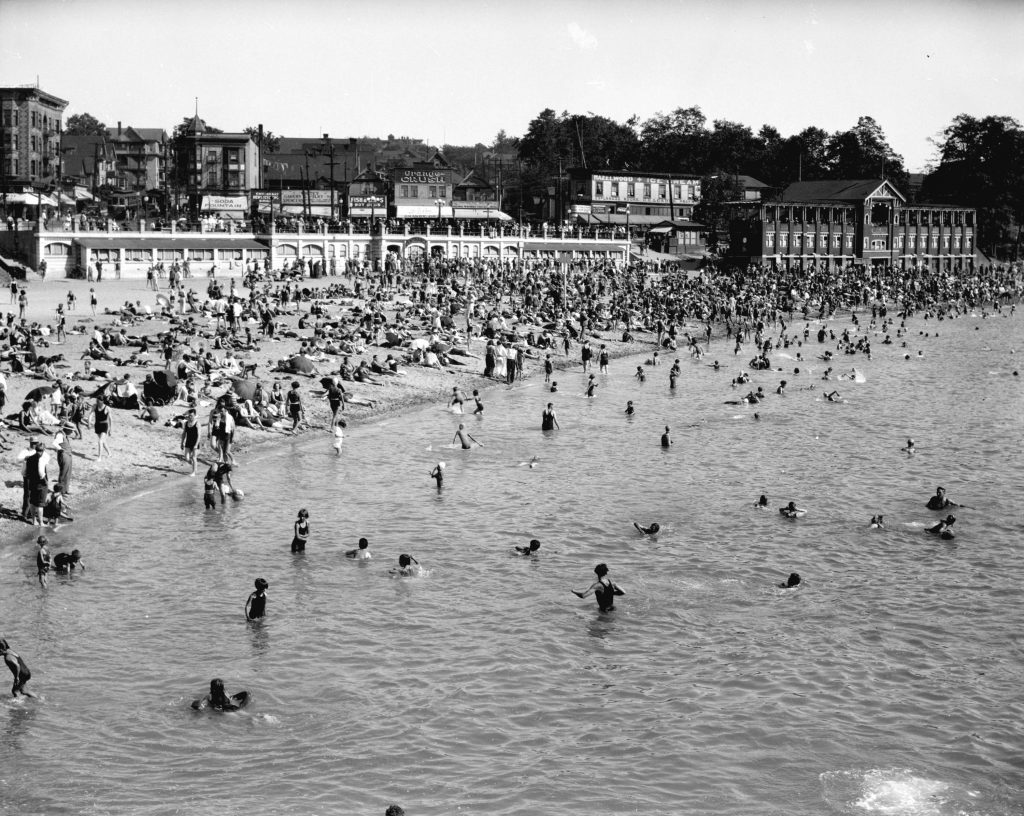 But for some people, two public bath houses weren’t enough. Between 1916 and 1921, the Park Board Commissioners tried to build something grander at English Bay: a “natatorium”, a heated salt water swimming pool and baths for winter use.

In 1916, Commissioner W.R. Owen submitted to the Board the idea for a winter swimming facility to be built at English Bay. Park Board Engineer A.S. Wootton was charged with gathering information on the construction and operating costs of similar facilities in other cities, and in 1919 the Vancouver architecture firm of Sharp and Thompson was chosen to work with Wootton to develop a concept for a swimming pool building. On November 12, 1919, C.J. Thompson for Sharp and Thompson and A.S. Wootton jointly submitted a report to the Park Board, discussing various options for siting the new building. 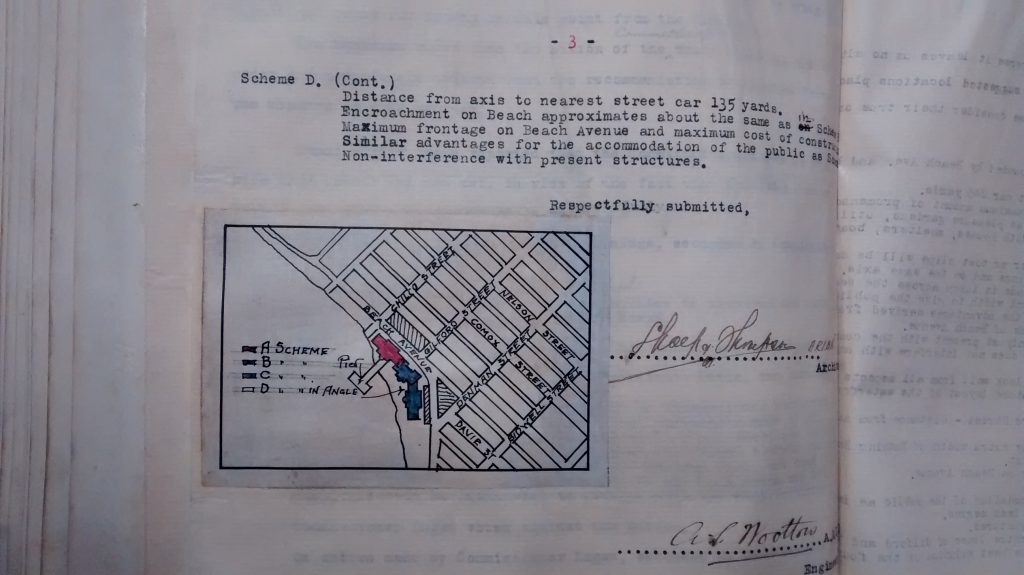 As you can see from the drawing below and the one at the top of the post the architects somewhat exceeded their brief of designing a “swimming bath” and instead designed a veritable palace of leisure which would house, beyond the swimming pool and baths, a 660-seat public lecture hall, restaurant, tea room and winter gardens. 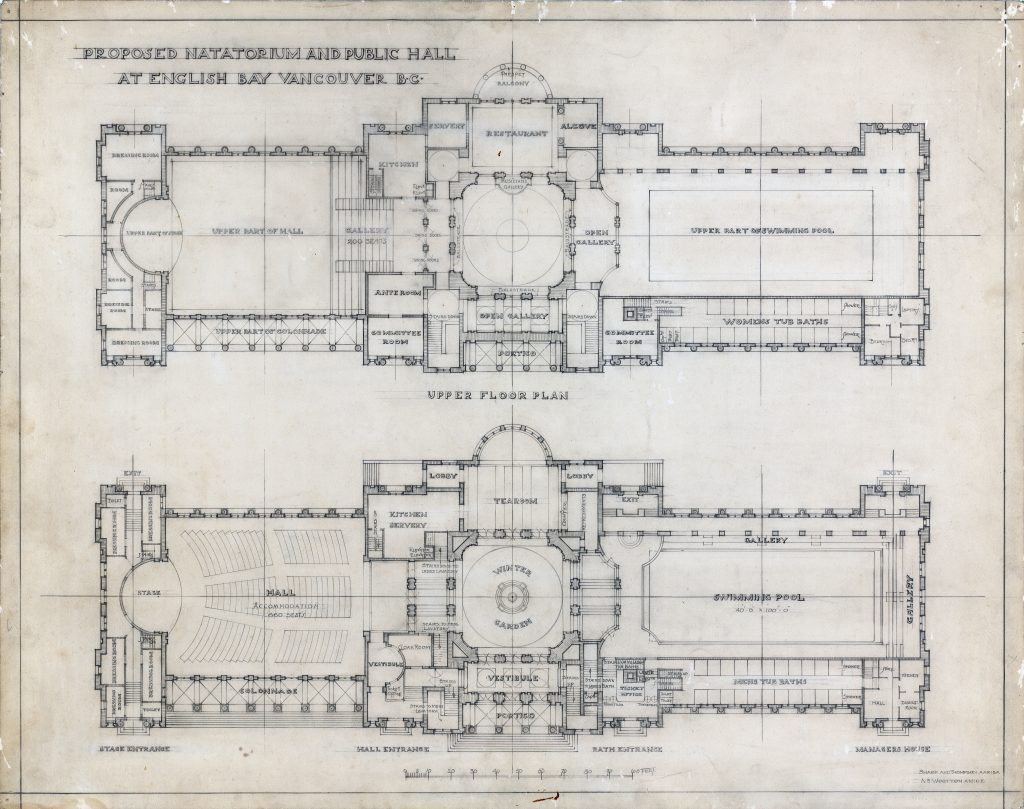 In a concession to their original brief, though, the building was designed to be built in two phases. The first would be the natatorium itself, the portion of their proposed building that would hold the swimming pool and baths. 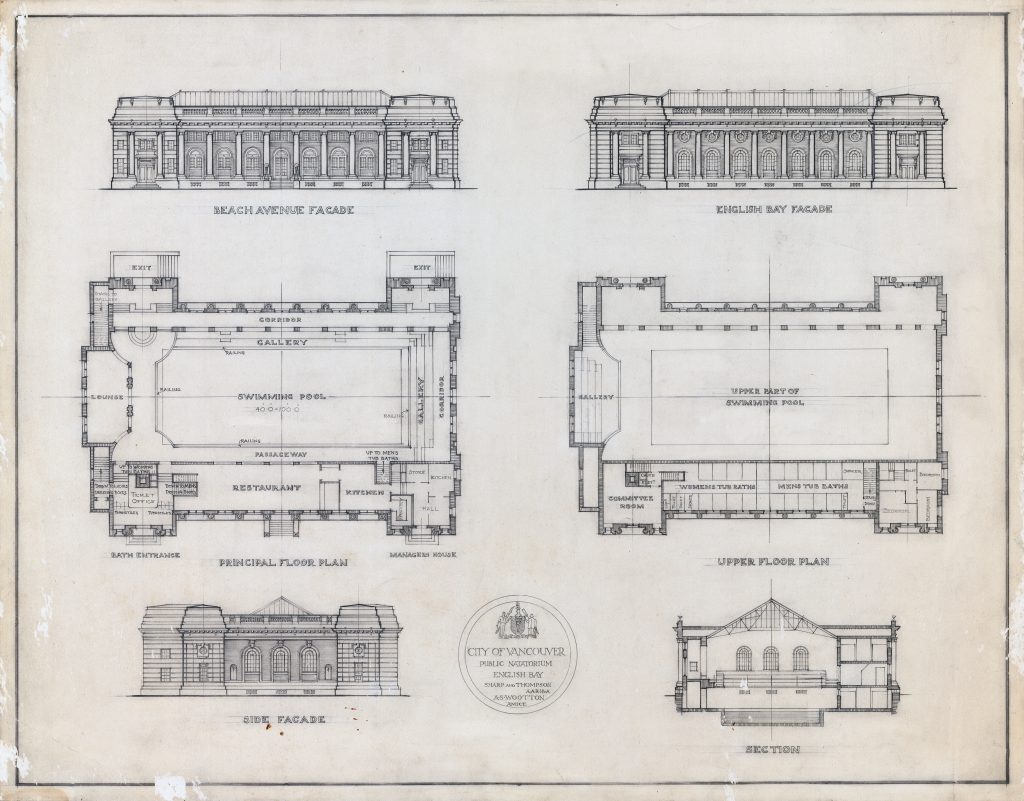 Their recommendation was that the building be located west of Beach Avenue, between Chilco and Guilford Streets, as is shown in this drawing. 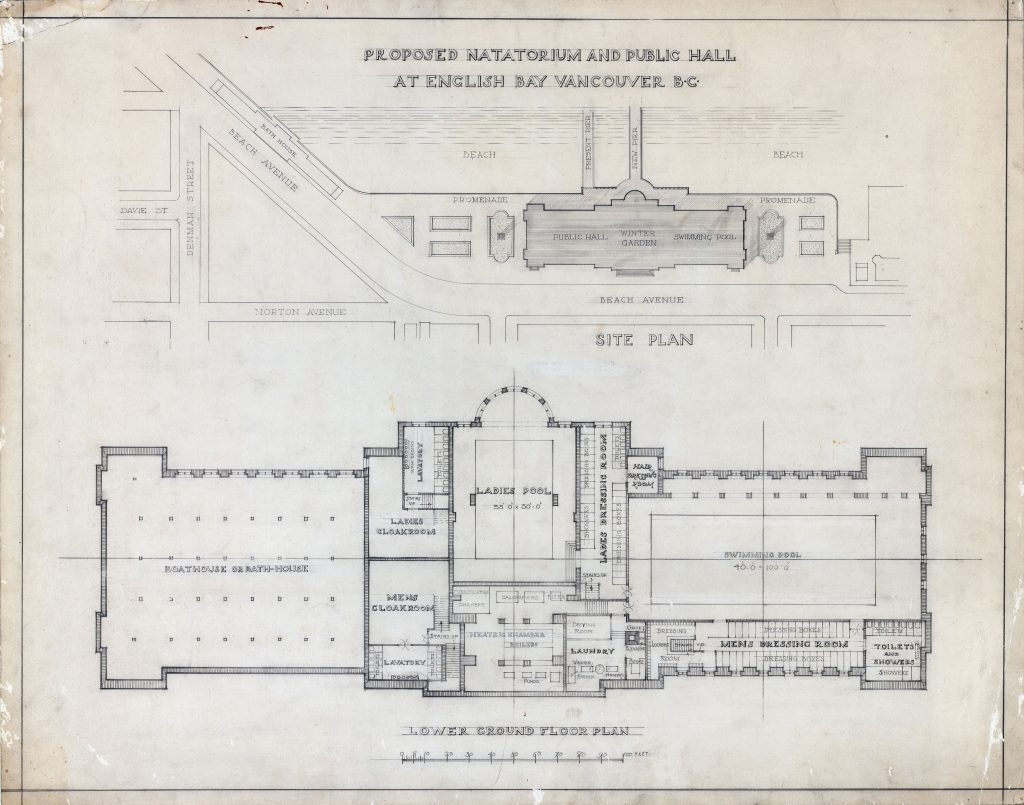 In the end, the economic recession that occurred after World War I put an end to the dream of an English Bay leisure palace. The Park Board decided in 1921 that a by-law to raise the more than $75,000 estimated cost would be defeated by the voters. City Council had been resistant to the project from the beginning, and without their support it was doubly likely that appeals for funding would fail. The Board toyed with the idea of having the facility built and operated by a private company, but the few enquiries from local development companies in 1921 and 1922 came to nothing.

In the end, the only significant development after 1909 that took place in English Bay was the removal of the first public bathing pavilion across the street from Alexandra Park and its replacement with the current English Bay bath house.

Written by: Sharon Walz
This entry was posted in Holdings and tagged architecture, English Bay. Bookmark the permalink.