As we noted in a previous post, after more than four decades of service, the James Skitt Matthews building in Vanier Park has reached its full capacity and we are preparing to move to a larger space where we can continue to serve the public for many years to come. Part of this preparation involves inventorying the holdings and housing or rehousing them as needed to ensure they can safely travel. One challenging side effect of this work is that when records are housed in sturdy, supportive containers, they take up more room. That’s a problem when the vault is already full. The solution is kind of like playing Tetris. This post gives you an idea of how we play the game, every day. 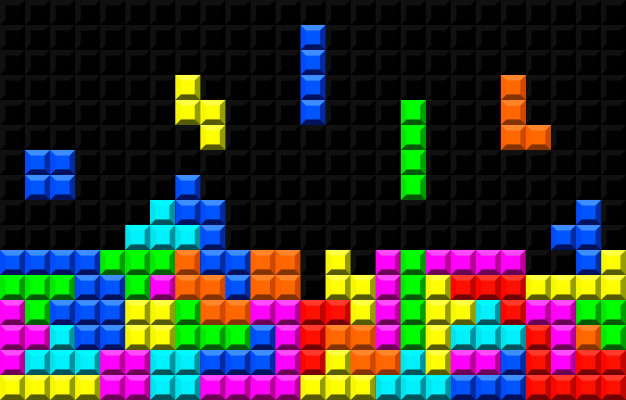 Our oversize bound volumes that do not fit into a standard archival quality storage box are stored unboxed, side by side on open shelves. When these volumes are housed in sturdy new storage boxes, the space they occupy almost doubles! To maximize the use of our space we try to consolidate volumes depending on their type and size. Once we decide which types of boxes are best suited for the specific volumes, and how many will be used, we often find ourselves reorganizing the volumes and shelving itself in order to optimize the box distribution, often at a new location.

A good example of this game of archival Tetris is the housing of City Engineer’s reports that date from 1906 to 1959. We were faced with five shelves of bound volumes of a similar depth and height but ranging in width from 1.5” to 7.5”. 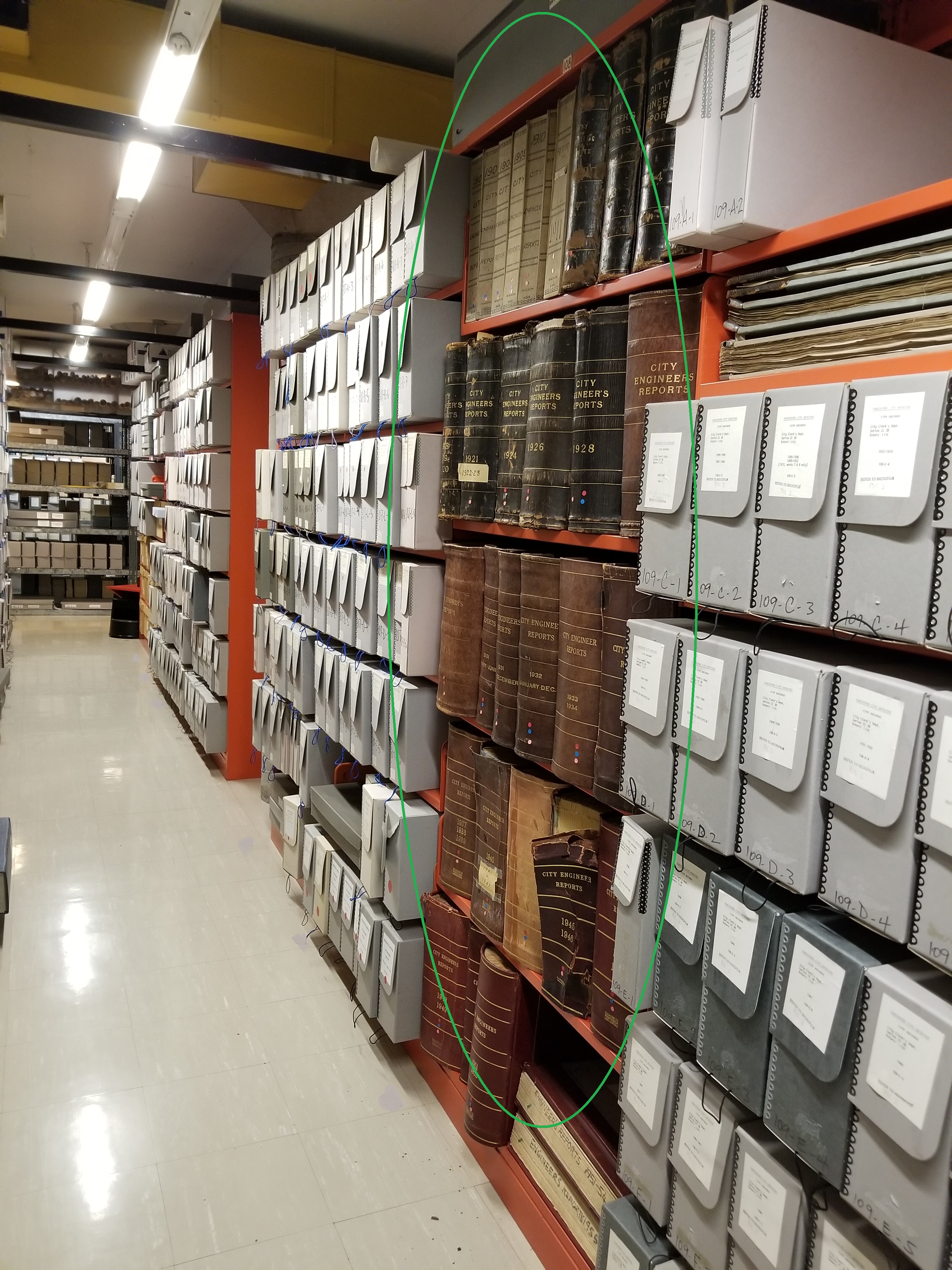 To house them properly, we decided to use a clamshell-style box that comes in 3” and 5” depths and a two-piece 8″ depth flat box. The deeper two-piece box has a bottom and lid which makes its outer dimensions a little bigger than the two shallower clamshell boxes. While the shallower boxes can sit on a shelf side by side, the deeper boxes have to be combined with the shallow ones in order to fit side by side.

Only one deep box fits on a shelf, but it can be combined with two shallower boxes. Photos by Heather Gordon

This bay had 20 volumes that needed 8” deep boxes, and because these deep boxes are not usually stacked on top of one another (to make retrieval for researchers more efficient), we could only return eight of the 20 large volumes, when boxed, to this bay. Not the best use of available space.

Fortunately, the Board of Works minute books, a series consisting mostly of a large number of narrower bound volumes and located on a bay across the aisle from the City Engineer’s reports, were ready to be housed as well. By using these two bays we calculated that we would be able to accommodate most of the volumes in roughly the same location, only needing additional space for a few large volumes. 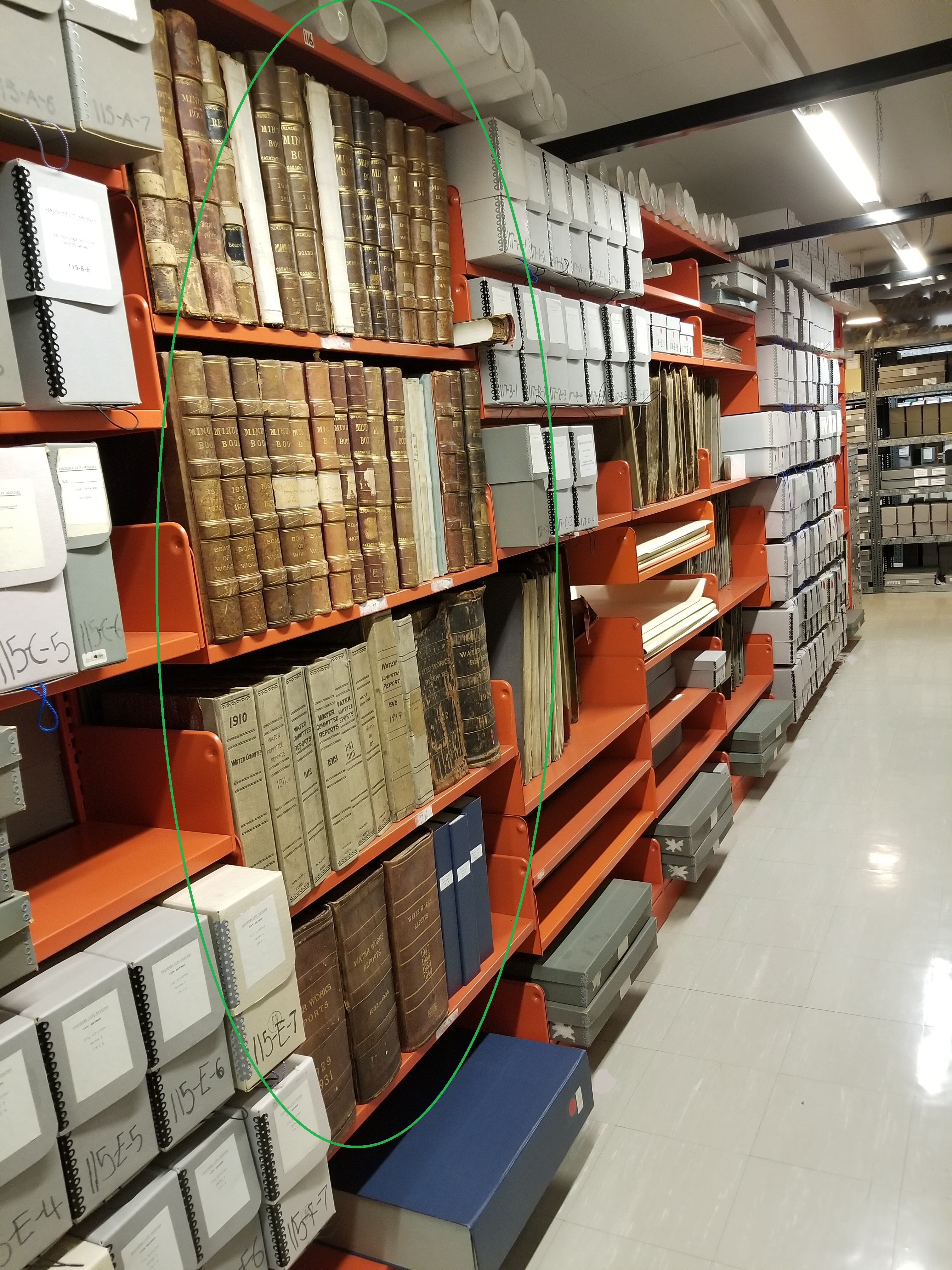 Unboxed Board of Works minute books on their original shelving bay. Photo by Paola Merkins

We began the relocation with the City Engineer’s reports. Because we knew we needed additional space to store all the volumes, we identified a few shelves that would accommodate the overflow boxes and relocated them first. 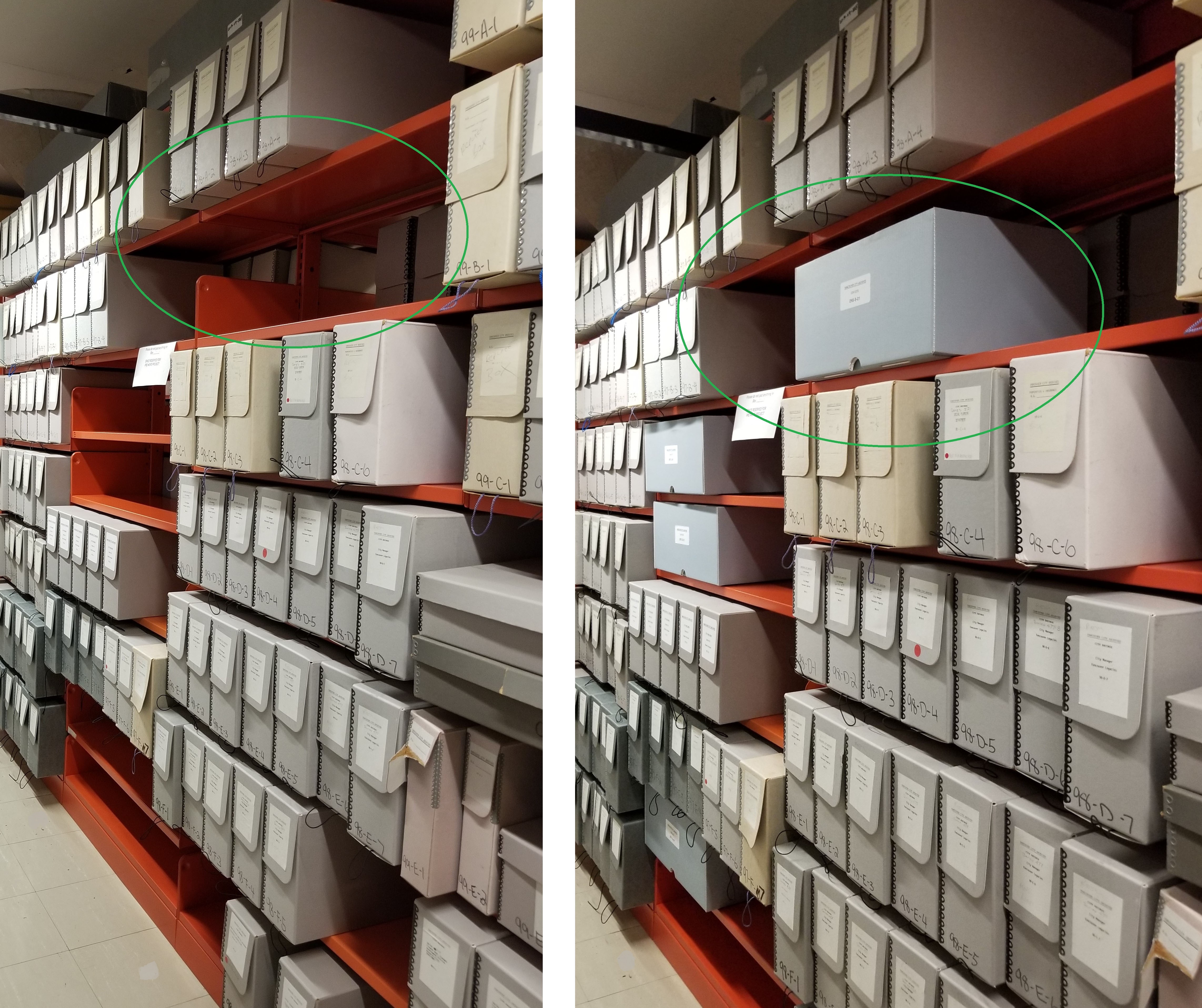 The empty spaces on these two bays allowed us to relocate some of the larger the volumes first (right). Photo by Paola Merkins

With the large volumes off the first bay, we were able to redistribute and add enough shelves to accommodate the large 8” boxes. Once the shelving was set up, the rehoused volumes were assigned new locations there. 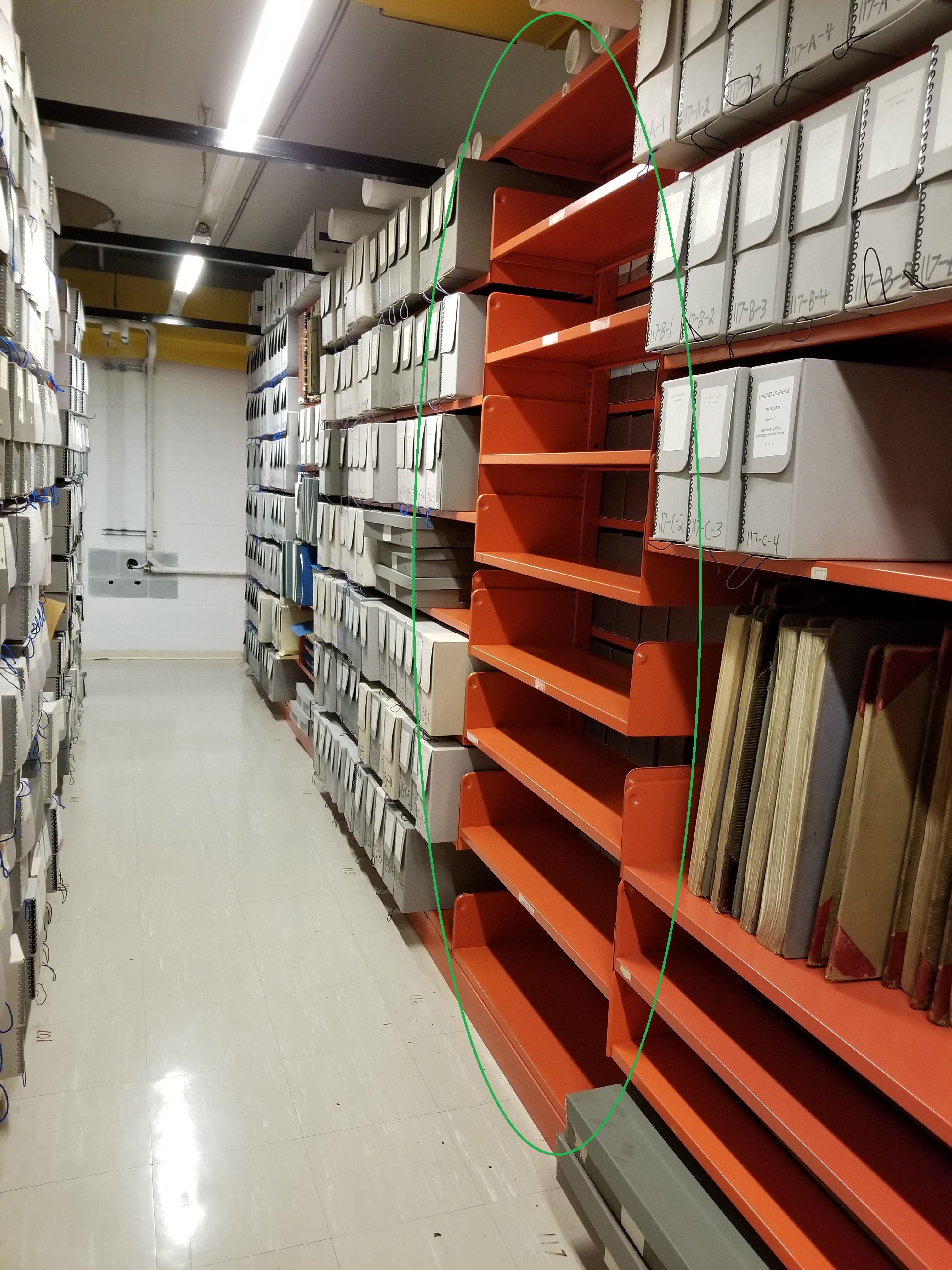 By working on both bays at the same time we were able to create enough “swing” space to start filling in the empty shelves with the newly boxed volumes. We did this by alternating the pulls between bays and meticulously tracked the location of each volume throughout the process to ensure that it could be found at any time if requested by a researcher. 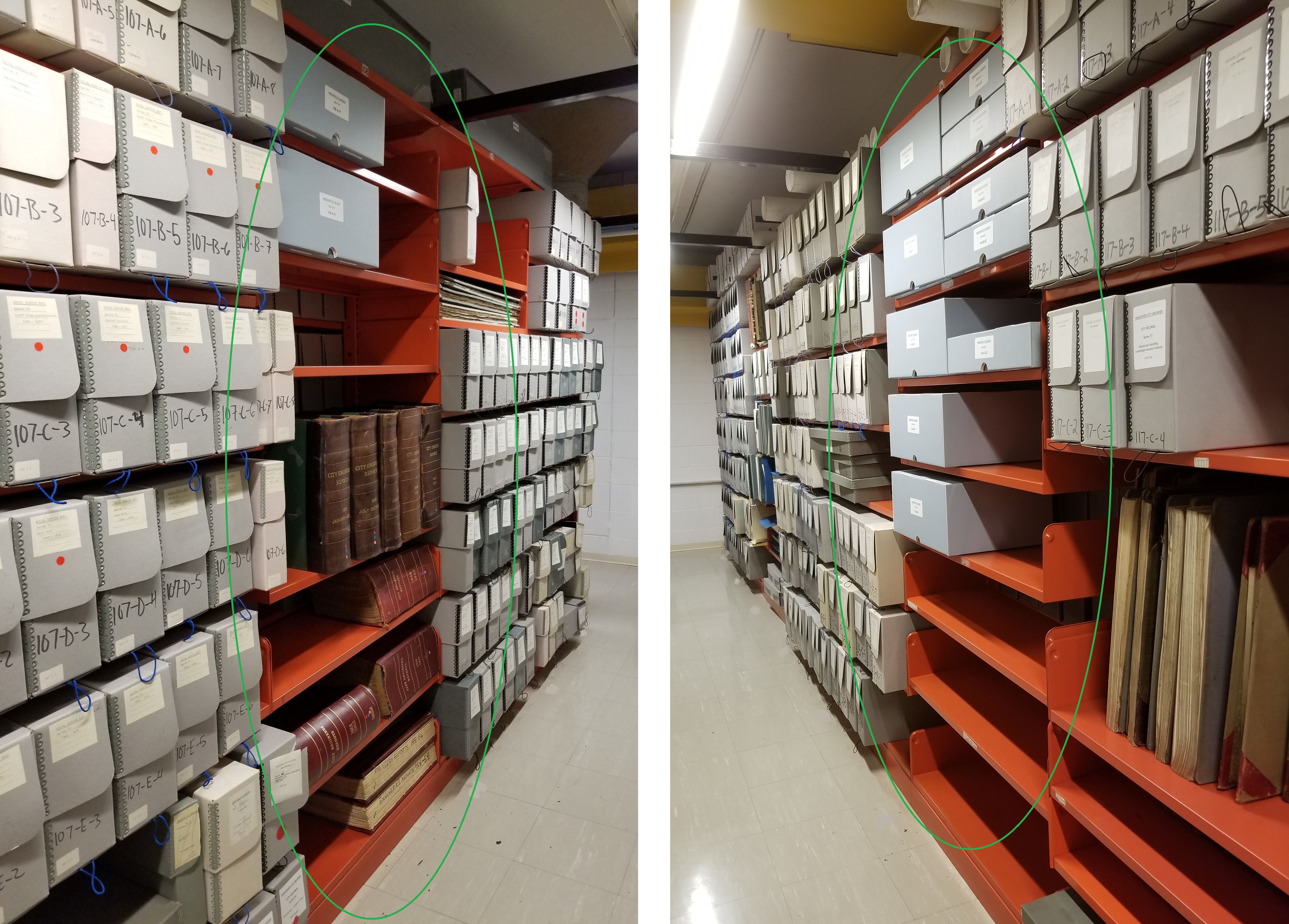 These two images depict how both bays were being worked at simultaneously. Photo by Paola Merkins

Eventually all the volumes from both bays were rehoused and our database updated to reflect their new locations. 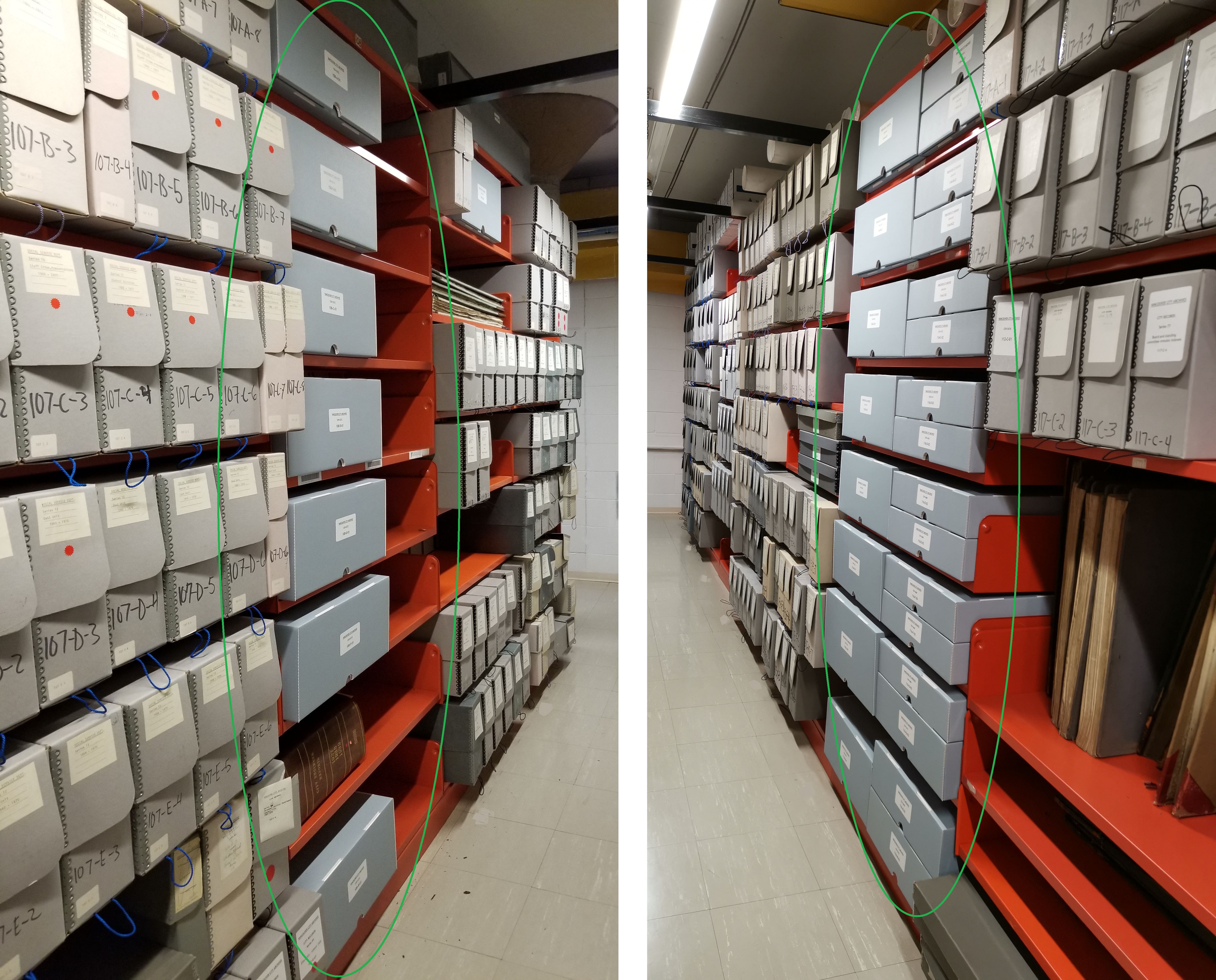 City Engineer’s reports and Board of Works minute books in their new locations. Photo by Paola Merkins

Another kind of Tetris challenge is created as the holdings are inventoried and box contents more appropriately re-housed. This results in gaps on the shelves that quickly become the new home for newly-boxed bound volumes.

Rehoused volumes are seen here in shelving space that was created during the inventory process. Photo by Paola Merkins

And a key part of the game is staking out territory. Shelves in the vault are truly coveted real estate! 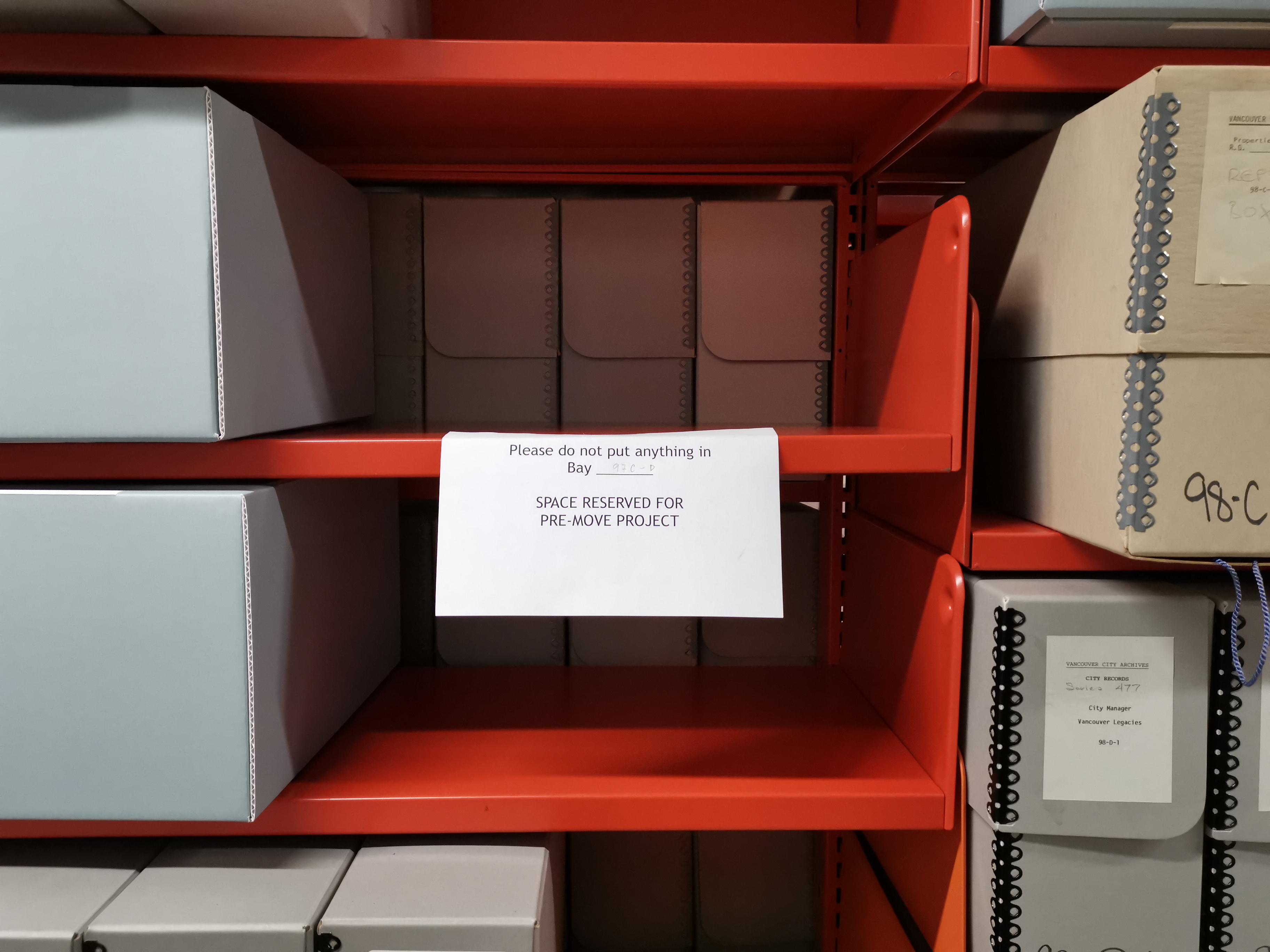 We are now 64% finished boxing oversized bound volumes, and are starting work on housing rolled drawings. We will keep you updated as the conservation team tackles other challenges in the Pre-move project.

Written by: Paola Merkins
This entry was posted in Holdings, Preservation and tagged boxes. Bookmark the permalink.