Which three words best describe your Open Government vision? Let us know in the comments.

In the last few weeks, Archives staff have attended two meetings sponsored by Open Government West: Open Government West 2011, in Portland, and a Vancouver Open Government Lunch, at City Hall. Being legally responsible for preserving and making available City records of enduring value, we have been a part of open government for many years. We are always trying to find ways to make more records available online and in useful formats.

We have a strong interest in

Open Government West (OGW) 2011 was held May 13-14 in Portland. Day 1 had scheduled speakers and Day 2 was an unconference, in which the participants suggested their own topics. Talks for a wider audience were held in a huge tent in the hotel parking lot and in a live-music venue down the street. The first OGW conference was held last year and was such a success that many attendees came from Ontario and the eastern US.

Here are some highlights from the many sessions.

The first keynote was given by Portland Mayor Sam Adams, who announced the impending launch of a new hyper-local 2-way communication service building on their PDX Reporter app, which allows citizens to report problems with Portland infrastructure, including an image and GPS coordinates. 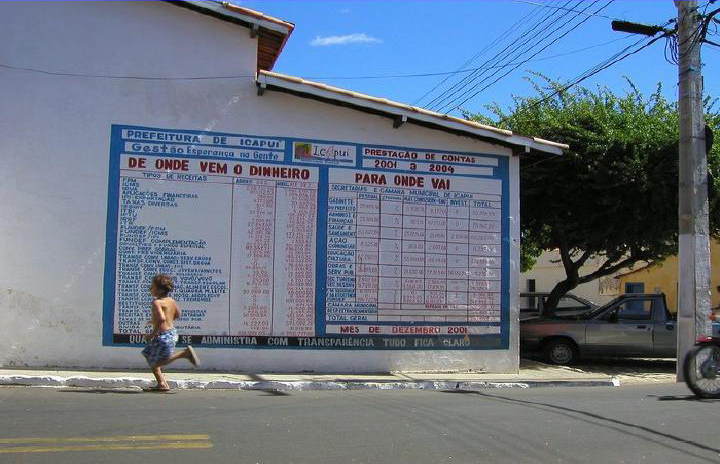 Inspired by this, Luke Closs created a chalk version of his web visualization of Vancouver City Councillors’ expense data, data which the City recently made available as part of its open data catalogue. 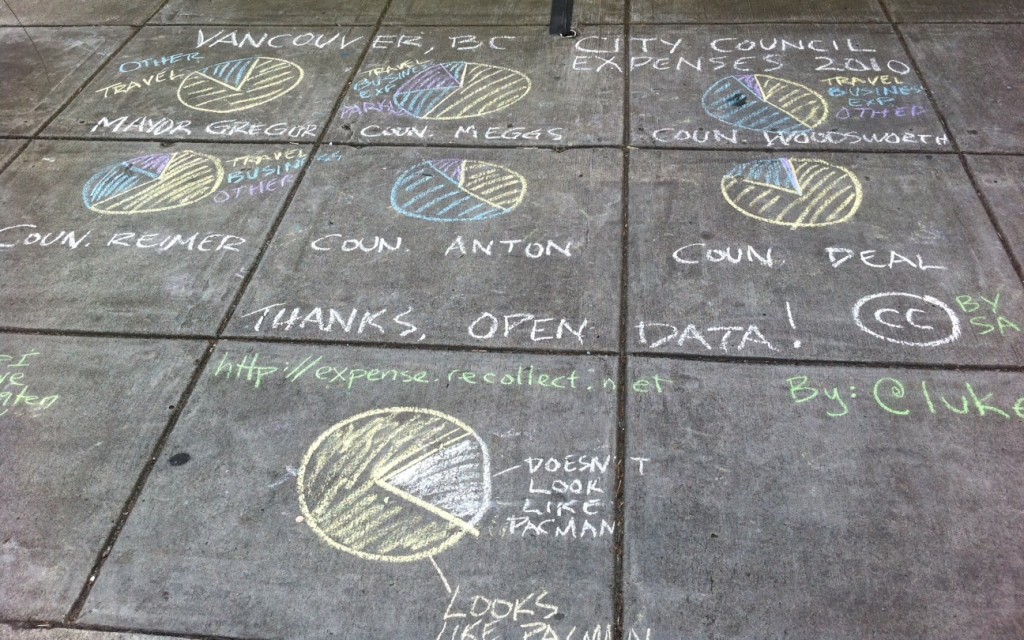 The City of Vancouver was also represented by Amanda Mitchell and Lindsay Cole of the Greenest City Action Team, who impressed many with their approach to public engagement: not only did they have the City’s first Facebook account, but they use Twitter and YouTube as well as face-to-face events.

In the “Creating Open, Accessible, Low-Cost Documents” panel at Open Government West 2011, I spoke about our pilot to make analogue records available inexpensively in multiple digital formats and for those with print disabilities through the Internet Archive. Spencer Tickner, of the B.C. Government Queen’s Printer, let people know about the tool they have developed to make it easy for office staff to mark up legislative documents with xml. This improves searching and transforming of those documents. At a later session, Fabio Vitale, founder of the legislative document xml standard Akoma Ntoso spoke via Skype.

At “Growing the Open Government Community”, Lovisa Williams, the Social Media strategist for the US Dept. of State, talked about their creative ways to bring students, NGOs and government together. They hosted a virtual exchange program, “Kansas to Cairo” in Second Life.

There were many discussions on standards for data and document dissemination. Standards seem to work best when they fit the use—one standard may not be right for every case. Developers want (at least) the raw data to work with, and they can transform it to a standard if necessary. In some cases, developers may also need data delivered using an API in order for it to be useful.

Bob Woods from Albany, Oregon showed us Where Does My Money Go? which allows citizens to view the current city budget and how it is being spent, with data refreshed nightly.

A code-a-thon to produce useful civic apps took place on Day 2. Hackers worked in their own room singly or in teams. The grand prize winner was “211”, an app to find social services in your area.

There were some brief introductions that included our names, organizations and three words about why we were there (mine were “Sustainable Open Archives” and Heather’s were “Digital Preservation & Transparency”). We chatted about the relevance and benefits of open API’s , which we will have in a future release of our upcoming (2012!) data management and access system, ICA-AtoM.

City staff envisioned a future when providing open data could occur “in real time”. Developers encouraged the City to be more openly supportive of their development efforts (like VanTrash, which is now called Recollect) by providing easily findable links on the public website (like San Francisco’s App Showcase and Portland’s CivicApps). Some people thought the City’s next steps should be moving towards Open 311 like San Francisco’s, which is built on the same platform as our current 311 system in Vancouver.

In general, everyone agreed that more strategies for citizen engagement were needed to improve collaboration between community groups, the City and developers using open data. We concluded, too, that open government meant much more than providing open data: it means transparency, open processes, and probing the needs of technological and non-technological Vancouverites to drive innovation. Sarah Schacht, director of Knowledge as Power and local OGW organizer Karen Fung were excited about the diversity of the attendees and looked forward to more lunches and ideas for engaging the community at large.

Thanks to Sarah Schacht and Knowledge As Power for organizing these events. If you are interested in open government, watch for future Open Government West events. We hope to see you there.