Numerous projects outside the Archives staff’s regular course of business have been accomplished thanks to our many wonderful volunteers. Christine Tutt began volunteering at the Archives the summer before she began the Library and Information Technology program at Langara College. 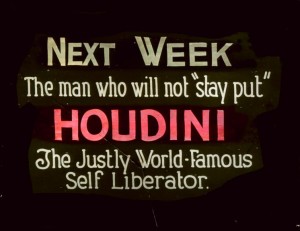 One of the many projects Christine has been working on. Glass snipe from 1923. Item # CVA 371-2809. Continue reading to learn more about snipes!

With great enthusiasm and dedication, Christine has generously spent more than 230 hours working on various projects at the Archives. Even now that she is a full-time student, Christine has continued to come into the Archives each week. As a Library Technician, Christine would love the opportunity to use her knowledge and skills at an archives or a municipal records department. Libraries and archives are a new direction for Christine. She holds a Fashion Design and Technology Diploma from Kwantlen University College and has previously worked in fashion, as a fitness instructor, and with books in various capacities.

Being the younger sibling of a photographer, Christine arrived at the Archives with hours of experience carefully looking at and handing prints and negatives. This skill was put to use at once at the Archives. Her first project was a very popular one at various events around the city in the summer of 2011, including Summer Live, the City’s 125the celebration in Stanley Park: the copy prints. Volunteers compared the copies to the originals ensuring that they were indeed exact copies and contained no additional information and were not misfiled. Thanks to the dedication of Christine and other volunteers, the Archives was able to give away several banker-boxes-worth of copies of photographs from the Major Matthews photograph collection. As an additional benefit, the Archives gained some much-needed space in its storage area. 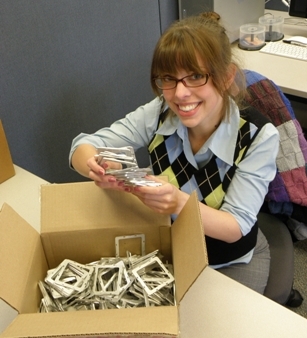 Christine with the left-over aluminum frames.

One of the interesting series of photographs that Christine worked on was a section of the City Engineering Services fonds. These oversized (6×6 cm) colour slides from the 1950s were housed between glass in metal frames. To free the negatives from the dirty glass for digitization, each was pried out of its frame, housed in an acid-free envelope and the item number was recorded on the envelope. Christine also typed up the titles and item numbers for each so basic description could be made available.

Some of you might be familiar with Historypin from our previous posts. Historypin allows anyone to submit photographs and ‘pin’ them to a Google map where they can be sorted by date, donor, and viewed in Google Streetview. The Archives has over 300 photographs on its Historypin page. When photographs are sent to Historypin, each must have:

Additionally, there is a place for each photograph to have a story associated with it.

For about half of the scans of street views we submitted to Historypin, finding the latitude and longitude was a simple process. Using the street addresses we had for each photograph, our colleagues at VanMap kindly generated a spreadsheet of latitude and longitude. Unfortunately, half of the addresses were rejected by VanMap. A modern rendering of the city does not precisely reflect the way the city was once organized. Over time addresses change as development takes place and block numbering shifts. Christine to the rescue: using the scanned archival photographs, her knowledge of the city, and Google Earth Streetview, she plotted the coordinates of each of the 150+ addresses that VanMap rejected.

This issue of relating historical addresses to modern cities through time is a common one. The city of Philadelphia has a couple of interesting projects: the Historic Street index, which is fun to play with even for those of us not in Philly, and research toward a Historical Geocoder.

Other photograph projects have benefited from Christine’s time and effort. Assigning item numbers to photographs is a time-consuming process that is essential for controlling the items and is a first step toward ultimately digitizating and making the images available online. Unique item numbers allow the Archives to control the 75,000+ (and growing) digitized images that the Archives already has. 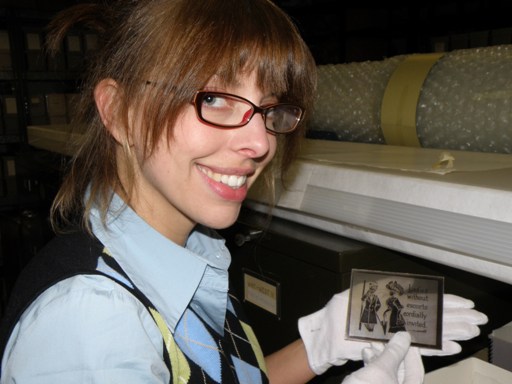 The glass snipe that Christine is holding reads: “Ladies without escorts cordially invited.”

Christine has been able to work with glass negatives on a couple of occasions. Here she is with a snipe [CVA371-2788], which would have been shown in theatres before or after a movie. Christine’s dedication, attention to detail and enthusiasm have seen numerous projects through to completion here at the Archives. Indeed, there are too many to list them all here. 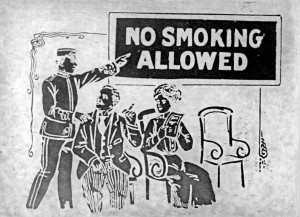 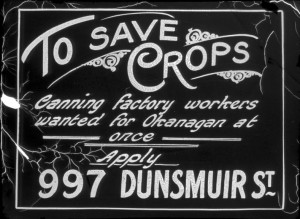 In addition to being a wonderful volunteer, Christine is the only person we know who has actually met Kermit the frog. Her mentor, Fran Dowie of Ding-a-ling Bro. Circus, with whom she studied for five years from the age of 10, was friends with Jim Henson, the famous puppeteer, and introduced her to the frog. Talking to Christine about this experience made me curious about the Henson Archives and possible job opportunities. Yes, there is one, and Karen Falk has been the Henson Archivist at the Jim Henson Company Archives since the 1990s. She has found many treasures over the years and has made efforts to share them with fans through a blog and a YouTube channel. The puppet-robot in ‘Flying A Robot’ in this comedic short created for American Oil Flying A sounds a great deal like a certain famous frog:

Written by: Cindy McLellan
This entry was posted in People and tagged copy prints, Historypin, photographs, snipe. Bookmark the permalink.